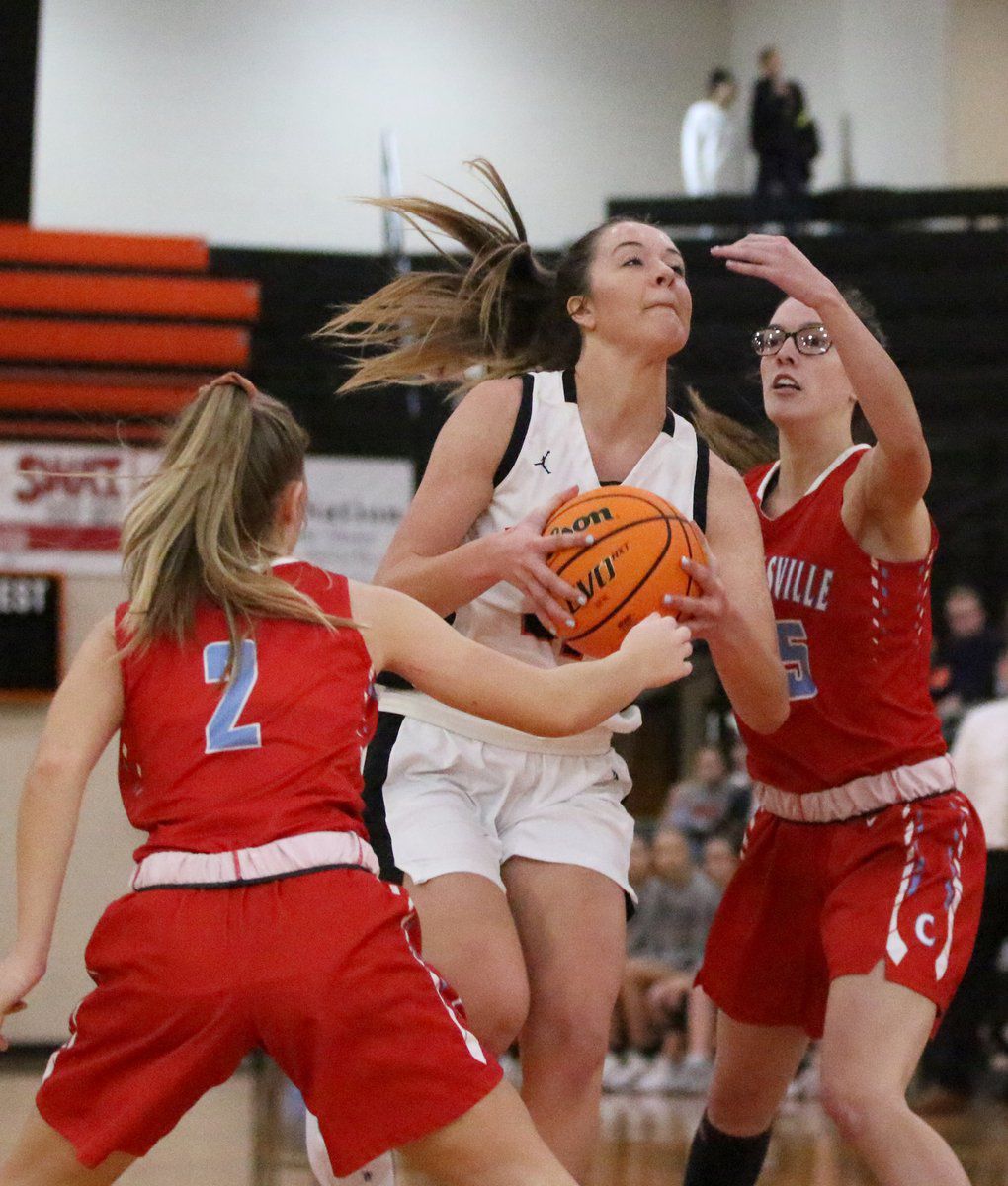 Tahlequah senior forward Kloe Bowin splits Collinsville defenders on her way to the basket Tuesday at the TMAC. Bowin had 13 points in the No. 7 Lady Tigers' 85-37 win. 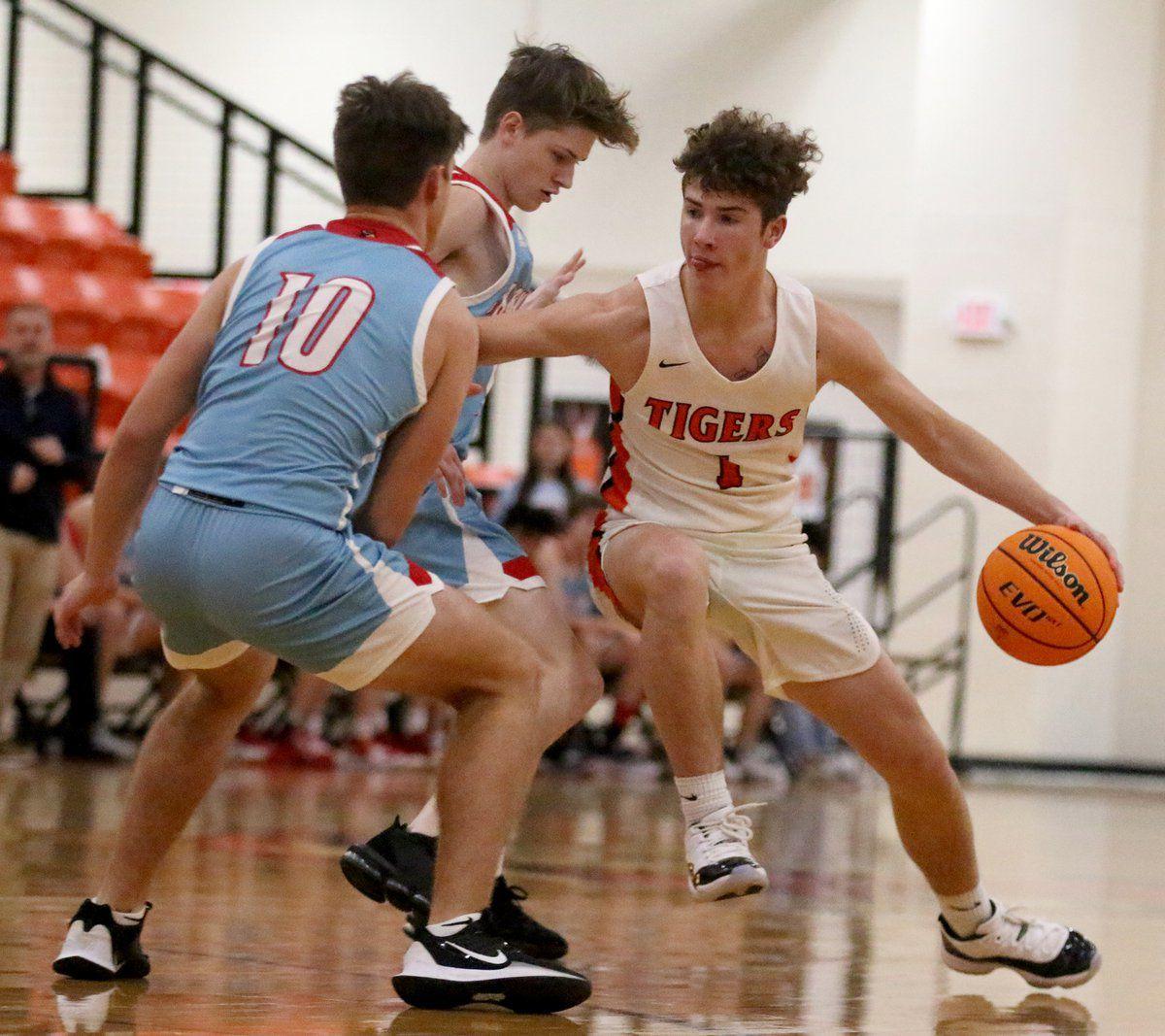 Tahlequah senior guard Jaxon Jones had 18 of his game-high 24 points in the fourth quarter against Collinsville Tuesday at the TMAC.

Tahlequah senior forward Kloe Bowin splits Collinsville defenders on her way to the basket Tuesday at the TMAC. Bowin had 13 points in the No. 7 Lady Tigers' 85-37 win.

Tahlequah senior guard Jaxon Jones had 18 of his game-high 24 points in the fourth quarter against Collinsville Tuesday at the TMAC.

Tahlequah was in complete command from start to finish Tuesday in its return to Metro Lakes Conference action against Collinsville at the Tahlequah Multipurpose Activity Center.

The Class 5A seventh-ranked Lady Tigers drilled 11 3-pointers and had four players finish in double figures in an easy 85-37 win.

Junior guard Kacey Fishinghawk finished with a game-high 19 points, 15 of those on 3-pointers, and sparked Tahlequah in the opening eight minutes as they built a 22-3 lead. Fishinghawk had nine of her points in the opening quarter on three 3s.

The Lady Tigers improve to 8-3 overall and 4-1 in conference play under head coach David Qualls.

"I think offensively right now we're in a good spot," Qualls said. "We've talked about we're shooting the ball well. We had 11 3s again tonight, had four girls in double figures. Offensively, right now we're playing pretty well. When we take care of the ball we can be tough to beat. I feel that's where this team's at right now. They're doing a great job of executing on both ends of the floor."

Much of Tahlequah's offense started with deflections on the defensive end.

"We made an emphasis when we got back from Bethany about switching up our half-court defenses and trying different things and really wanting to be in the passing lanes and getting a lot of deflections and traps and get out and run a little bit," Qualls said. "The girls did a great job of executing defensively and really keeping Collinsville off their toes."

Tahlequah launched from behind the 3-point arc from the get-go. The Lady Tigers first four baskets were 3-pointers -- Fishinghawk buried the first two and McAlvain added two more as they jumped out to a 12-3 lead at the 4:18 mark of the first quarter. Fishinghawk added her third with 1:30 left to put THS up 20-3.

Fishinghawk also led the way in the second, adding another 3 and seven more points as Tahlequah took a 37-16 lead into halftime. Springwater converted a pair of free throws with 3:11 remaining to give her team what would be its largest lead of the first half at 33-8.

The Lady Tigers put up 30 points in the third quarter to build a 40-point (67-27) advantage. Bowin had 10 points on five field goals, and Springwater knocked down two 3s and had eight points.

The Lady Tigers, who have won seven of their last eight games, had 11 different players record points. Naida Rodriguez and Gracie Kimble each had five points. Kynli Heist and Emily Morrison followed with four each, and Jayley Ray and Logan Ross had three apiece.

"That's the pride we take in being balanced," Qualls said. "We're hard to guard, I think. We can go inside-out, we can go outside-in, we can score in transition. When we execute our half-court sets we do a good job of getting really any shot we want. I'm proud of the girls and I'm excited about where this team can go, as long as we take care of the ball."

Collinsville, led by Riley White's seven points, falls to 3-10 overall and 2-4 in the Metro Lakes Conference. The Lady Cardinals upset fourth-ranked Ardmore, 61-56, last week on the opening day of the Ada Tournament.

Tahlequah will play its next six games away from home. The stretch begins with a visit to No. 16 Claremore (5-5, 2-2) on Friday.

Tigers' rally falls short: Tahlequah nearly came all the way back from a 25-point deficit but fell short to Class 5A No. 7 Collinsville, 62-59, Tuesday in Metro Lakes Conference play at the TMAC.

Senior standout guard Jaxon Jones led the surge with 13 of his game-high 24 points. Jones canned back-to-back 3-pointers that sliced the Cardinals' lead to 57-49, and later buried a third 3 at the 1:49 mark to make it 59-54. Tanner Christian added three free throws to get the Tigers to within two points.

Hayden Wagers trimmed the Collinsville lead to 60-59 after a basket with 22 seconds left, but the Cardinals received two free throws from Caden Bouy with two seconds showing on the clock and Jones misfired on a 3-point attempt at the buzzer.

The Tigers slip to 7-4 overall and 4-1 in the conference loss under head coach Duane Jones.

Jaxon Jones scored 18 of his points over the final eight minutes and connected on four of his six 3s during that time. Christian also finished in double figures with 11 points, and Wagers followed with nine. Hunter Brinkley ended with seven points.

Tahlequah struggled on the offensive end during the second quarter, allowing the Cardinals to take a 31-16 lead into halftime. The Tigers were outscored 18-4 as Collinsville was carried by Gage Longshore's two 3s. Longshore went on to lead the Cardinals with 20 points.

Collinsville, now 9-3 overall and 5-1 in the conference, also got double figure scoring from Ethan Cole (14 points) and Corey Dees (12).