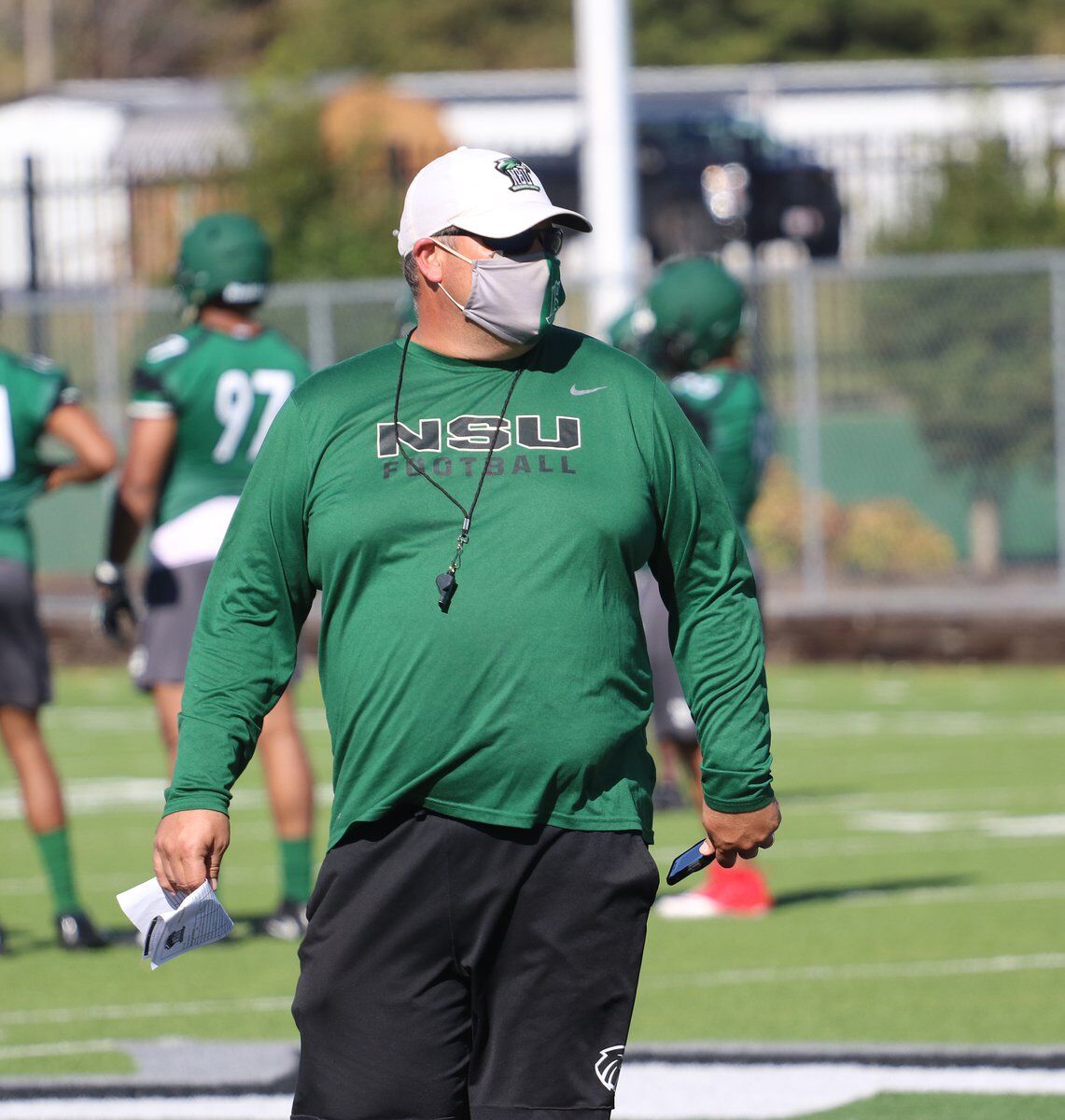 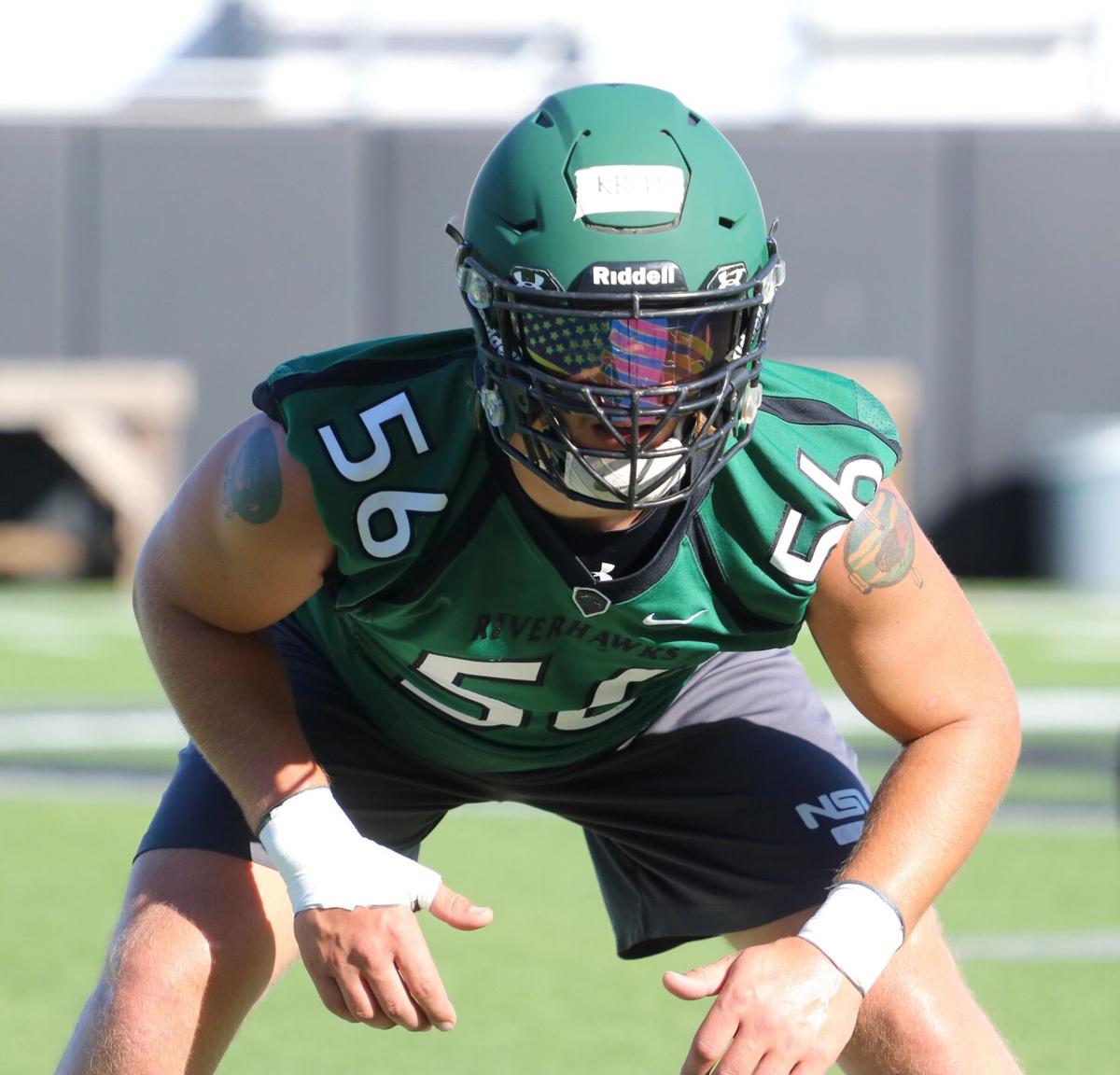 NSU linebacker Brady Kropp lines up for drills during a practice at Doc Wadley Stadium.

NSU linebacker Brady Kropp lines up for drills during a practice at Doc Wadley Stadium.

By now, Doc Wadley Stadium on the north side of Northeastern State University’s campus is typically hosting back-to-back football games with the Tigers and RiverHawks flying up and down the gridiron.

The coronavirus, COVID-19, changed all that.

And NSU Athletics hasn’t played an athletic event since March 12. The football team hasn’t torn up turf against another school since November 16 when it fell to Fort Hays State for its 24th straight loss.

That’ll all change March 27 when the RiverHawks travel to Stephenville, Texas, to take on Division I foe Tarleton State. A contract has been signed between the two programs. It will be the first non-conference opponent since October 19, 2013.

Working to prepare for a game four months down the road is tough. With the coronavirus running rampant in Oklahoma head coach J.J. Eckert’s squad has faced numerous difficulties and roadblocks, yet they have transitioned to the new normal as much as possible.

The biggest of which is no contact drills until October 13. It took seven months and one day for them to return after being shut down after three spring practices.

Eckert said he’s thankful for what his program accomplished during the layoff in terms of strength and conditioning as well as adjusting to the busy, time-sensitive, student-athlete schedule. The RiverHawks had staggered practices for eight weeks beginning August 17.

“You never get that,” Eckert said. “Some kind of precursor that leads into the opportunity to start practice in the fall. It has always been you show up and start practice August 6 and a month later you play a football game. It’s given our younger guys a chance to develop and have a chance to get more acclimated to the expectations.”

Sophomore defensive back/linebacker Elijah Wallace said that he is excited to start full squad practices so that he can get to know the rest of his teammates.

“This year it’s been the skill players, the medium skill and linemen workout by themselves so a lot of the newcomers haven’t met all their teammates,” Wallace, who is one of three defensive returners who played in all 11 games, said. “We have a little ways to go in building that [team-wide] trust back up. The ones who do workout together are closer than ever.”

Senior quarterback Quez Allen feels that he’s been able to have more time to come together and connect with his offensive group. He also feels the team as a whole is in better physically than throughout the 2019 campaign.

“We are more of a family now then we were in the past and we are definitely in better shape than we were before,” Allen said.

Eckert is proud of the way his team carries themselves and looks, and feels, more dominant. He knows it will help in future MIAA play and spring football contests.

“It’s a very physical league, you’ve got a lot of fourth- and fifth-year seniors that are out there playing,” Eckert said. “You’ve got guys who have a lot of months invested into those programs, and that’s what we are trying to get to.”

The entire coaching staff knows that there’s a long way to go, but feels each day they’re taking steps in the right direction. This includes the recruiting class of 46 true freshmen and 18 transfer students. Additionally, the team has 16 redshirt-freshmen on the roster, who are anxious for their first game action.

“I think we were able to recruit a really solid group of individuals that make up this football team today,” Eckert said. “The belief in what we are doing is going to open up better opportunities for us in the future.”

Practicing Tuesday through Thursday until at least November 12 and four intrasquad scrimmages on Saturdays beginning October 24 is the next step towards a brighter future for Northeastern State University football.