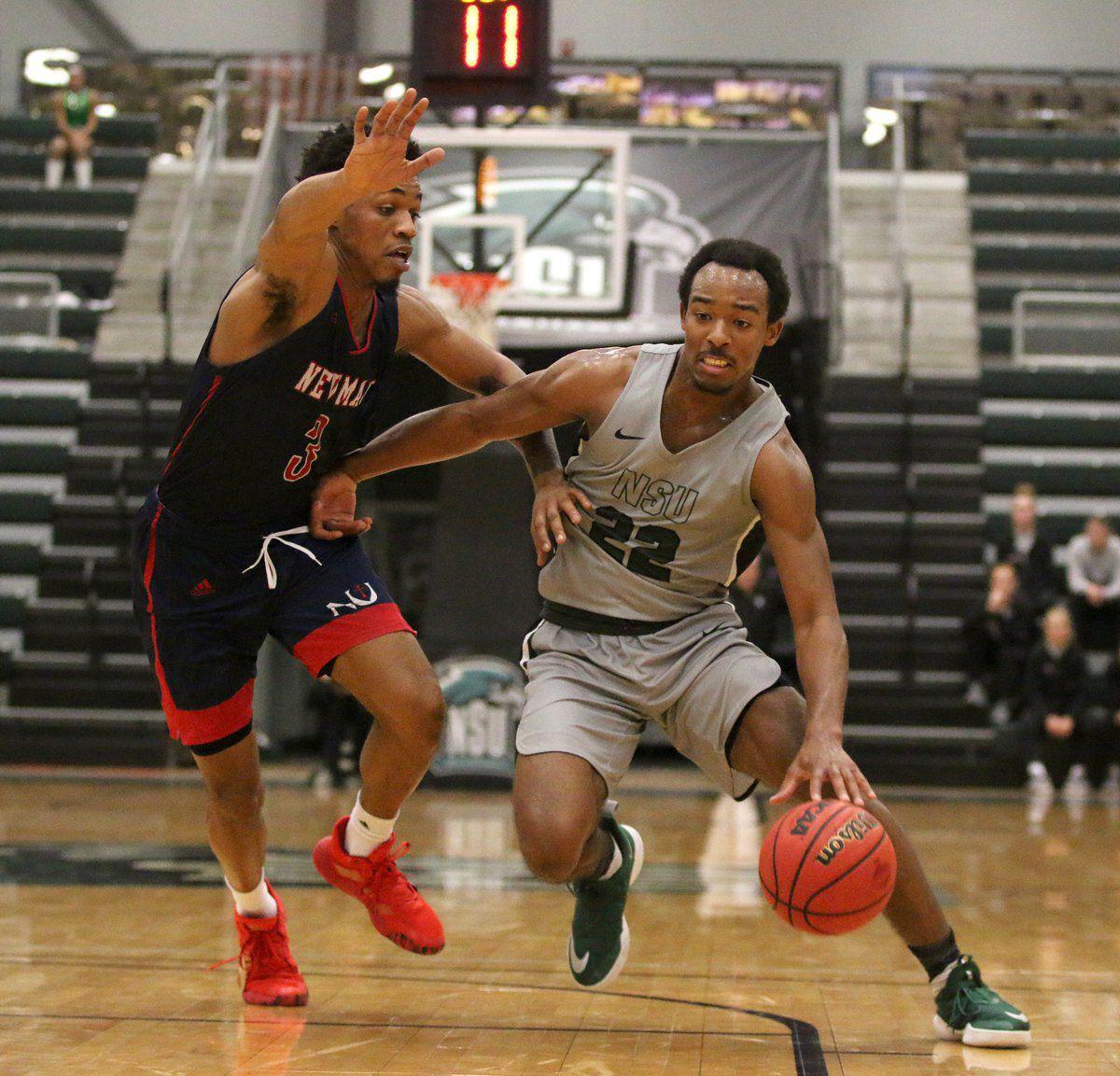 Northeastern State senior guard Bradley George drives to the basket Thursday evening against Newman at the NSU Event Center. The RiverHawks defeated the Jets, 70-67, in overtime in their MIAA opener. 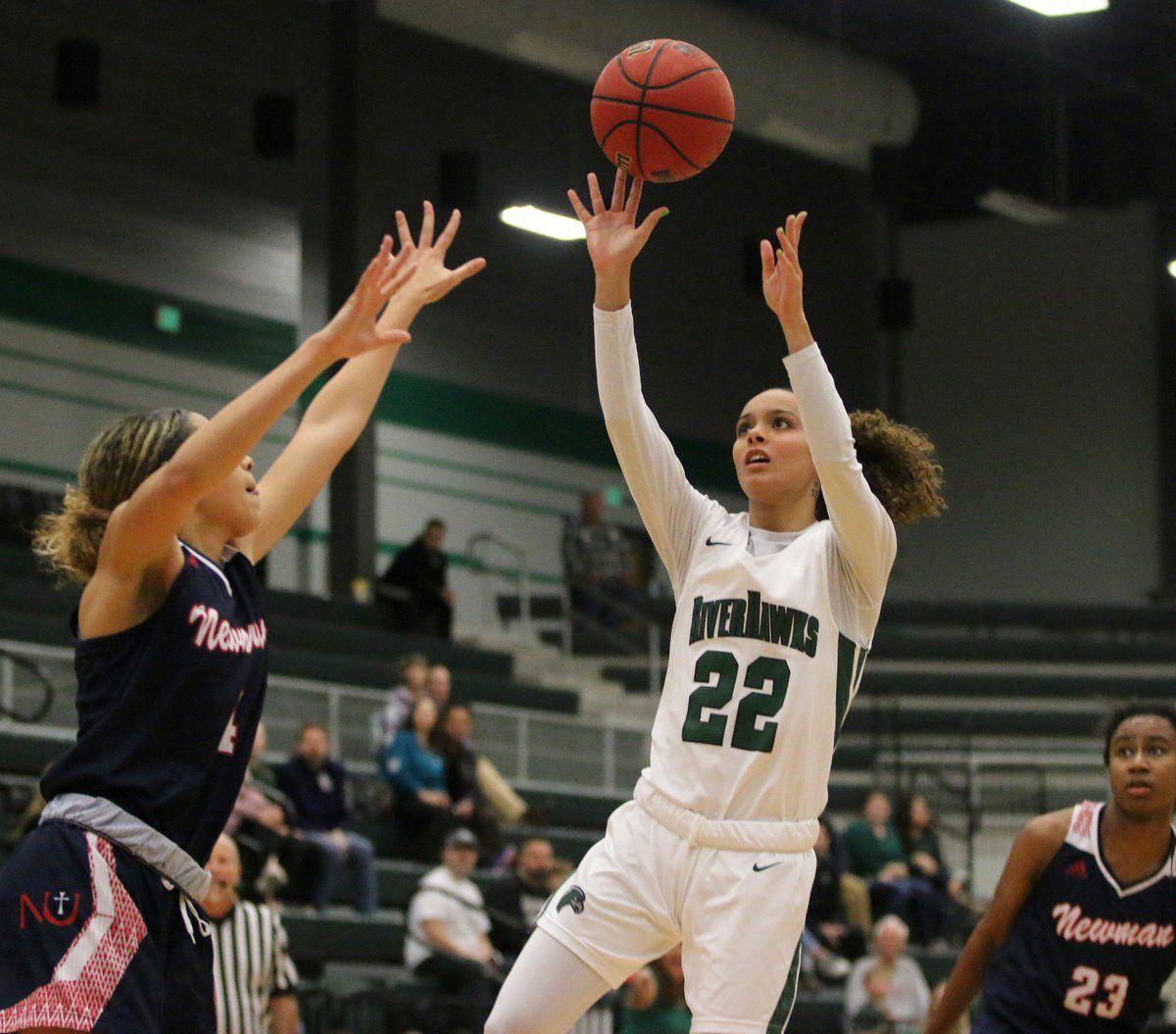 NSU's Maegan Lee pulls up for a short jumper Thursday against Newman at the NSU Event Center.

Northeastern State senior guard Bradley George drives to the basket Thursday evening against Newman at the NSU Event Center. The RiverHawks defeated the Jets, 70-67, in overtime in their MIAA opener.

NSU's Maegan Lee pulls up for a short jumper Thursday against Newman at the NSU Event Center.

Shae Sanchez and Morgan Hellyer each reached career highs Thursday and helped lift Northeastern State to 66-60 win over Newman in its MIAA opener at the NSU Event Center.

Sanchez poured in 26 points and knocked down six 3-pointers, and Hellyer added 12 points, 10 of those coming in the first half.

The RiverHawks, who end a three-game slide, improve to 3-5 overall under head coach Fala Bullock.

"Gutsy, really proud of the team," Bullock said. "They really hung in there, they had some chances to give that one away but they really showed some true grit and character and all the things we know that we're capable of showed up tonight in those last minutes and um a total team effort, just really proud. It was a great win."

NSU went on a 14-3 run in the final 2:47 to take control. Sophomore guards Maegan Lee and Morgan Lee combined for nine points to spark the run, and Sanchez had five points.

Sanchez had 18 of her points over the final two quarters and shot 9 of 13 overall. Hellyer was a 5 of 8 from the floor. NSU leading scorer Cenia Hayes and Morgan Lee each had eight points, and Hayes pulled down a team-high eight rebounds.

"Man it was just, we talked about coming out with a lot of fire," Sanchez said. "This is our first conference game and we just wanted to show them that we are here to compete and we don't want to be in the bottom, we want to be on top with the rest of the big dogs, and for me, I mean I couldn't have gotten all those shots off without my teammates passing me the ball, looking for me. They were a big part of my success and I mean I'm just happy to contribute to the win in any way I can. It was such a great team win."

The RiverHawks, who limited Newman's five starters to a combined two points in the first half, shot 46 percent overall as a team and connected on nine of their 19 3-point attempts. They had 20 assists on 23 made field goals.

Northeastern State will remain home on Saturday when it hosts Central Oklahoma in a 1:30 p.m. tipoff at the NSU Event Center.

Northeastern State dug themselves out of a 13-point second-half deficit to beat Newman 70-67 in overtime on Thursday evening.

Red Oak's Brad Davis landed a pair of crucial treys in the closing minutes and later iced the game at the line to push the RiverHawks' season to an 8-1 start.

"I bet that was a lot of fun for our crowd, for our fans. I don't know how much fun that was for us until the buzzer went off, or for me anyway," said head coach Mark Downey. "We showed a lot of toughness, we battled through a lot of adversity tonight, I mean shoot they banked in a shot to go to overtime, a lot of people would quit but our guys never quit, we had some guys step up, Bradley George and Brad Davis, they had some huge plays for us tonight, and just kept battling and it was good."

The RiverHawks faded as the first half went on, and a nine-point lead dissolved behind five three-pointers by the Jets. Adding to NSU's woes, Newman took advantage of eight Northeastern turnovers and cashed them in for ten points. Smith carried the team with 13 points on 6-for-8 shooting, but they went into the locker room trailing at home for the first time this season 33-27.

After going scoreless for the final two minutes in the first half, the RiverHawks scoring lull in continued into the second period. Northeastern State went 5:21 before Aaron Givens scored on a put-back dunk to trail the Jets 40-29 at the 16:38 mark. A six-minute scoreless spell by Jets gave the RiverHawks a window to climb back in, and they used an 11-2 run to get within a pair (48-46) with 6:30 left.

In the closing minutes of regulation, Davis carried the RiverHawks with a pair of treys from in front of the NSU bench. His second on came with 19 seconds to go to give NSU a 59-56 lead over the Jets. However, Newman's Allen Wilson came back with a trey of his own from the top of the key pushing the game to overtime.

The RiverHawks opened the extra period on a run of six straight points to go up 65-59 on the Jets. Despite the run, the fight wasn't over, and Newman scored five straight to pull back within one. With 15 seconds the go, the Jets were forced to foul Bradley George to extend the game. The senior made the first but missed the second, a key rebound from Iain McLaughlin gave the ball back in NSU, and Newman fouled to put the RiverHawks back to the line. Brad Davis connected on both to make it a four-point game. The Jets with seven seconds to go hit a trey to put it back to a one-point game. Newman put Davis back to the line following, and he iced the game for the win.