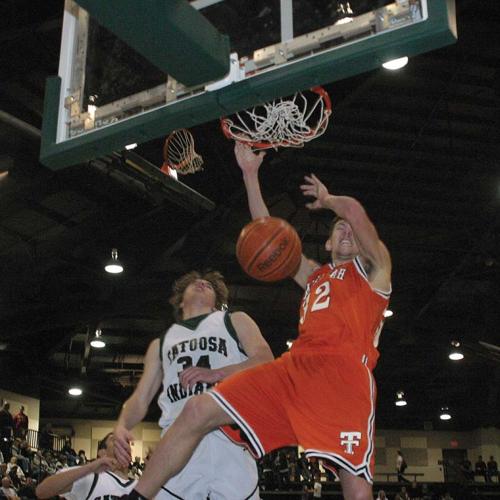 Tahlequah’s Adam Stovall (front) throws down a dunk in front of Catoosa’s Dakotah Poorboy (34) in the second half of Tahlequah’s 55-49 victory on Friday night. 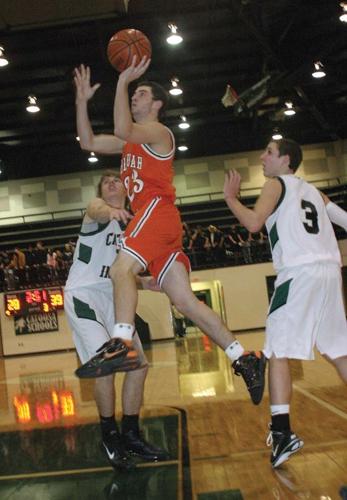 Tahlequah’s Collin Scarsdale (23) goes up for a shot between Catoosa’s Dakotah Poorboy (left) and Jake Magness. Scarsdale finished the game with five points.

Jon Griggs (1) puts up a shot for the Tigers in the second half of Tahlequah’s win over Catoosa. Griggs finished the game with 12 points and 10 assists. 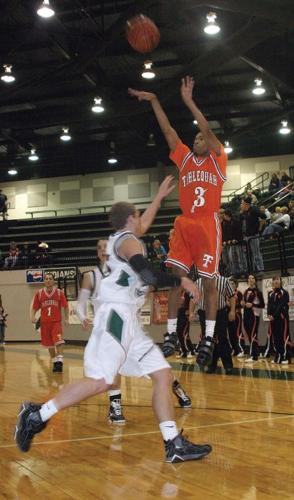 Tahlequah’s Adam Stovall (front) throws down a dunk in front of Catoosa’s Dakotah Poorboy (34) in the second half of Tahlequah’s 55-49 victory on Friday night.

Tahlequah’s Collin Scarsdale (23) goes up for a shot between Catoosa’s Dakotah Poorboy (left) and Jake Magness. Scarsdale finished the game with five points.

Jon Griggs (1) puts up a shot for the Tigers in the second half of Tahlequah’s win over Catoosa. Griggs finished the game with 12 points and 10 assists.

CATOOSA – Most athletes would rather play at home than have to travel and play a road game. But if Tahlequah’s Adam Stovall doesn’t like playing at Catoosa, he sure makes it hard to tell. After three solid performances in the Port City Classic at the Catoosa Indians Activity Center, Stovall turned in another stellar performance with 21 points and 12 rebounds in Tahlequah’s 55-49 win over Catoosa Friday night. “Yeah, I like this gym a lot,” said Stovall, who was laughing while thinking back to his handful of slam dunks against the Indians in the second half. The Tigers’ senior forward finished 9-of-13 from the field, including his “posterizing” dunk over Catoosa’s Caleb Hein, which punctuated Tahlequah’s victory. Stovall and the Class 5A No. 17 Tigers (10-8, 4-4 Metro Lakes Conference) dominated Catoosa early on – by leading as much as 17 in the first half – and held on late to pull off a season sweep of the Indians (5-12, 2-5). With the win, Tahlequah, who recorded its second road victory of the season, snapped a three-game losing streak, which began back on Jan. 23 in a loss to Claremore in the championship game of the Port City Classic. “We needed to stop it,” Tahlequah coach Wes Hayes said of snapping the losing skid. “We had a couple of very poor back-to-back showings where we didn’t compete. And talent that doesn’t work hard is disgusting, and we don’t want to be known as that, so we challenged (the players) to end the losing streak.” All Hayes wanted to see was his players giving all they had, and it showed up in the rebounding category, where the Tigers grabbed 39 compared to Catoosa’s 27. The Tigers also bowed up on defense and forced the Indians into a 16-of-60 shooting performance from the field. Catoosa also struggled from long range by only making four of 24 3-point attempts. “We were able to come away with a victory tonight because we made great effort,” Hayes said. “We didn’t take plays off, we contested passes and shots, we got strawberries, we got bloody, we got bruised up and that’s how you have to do everything. And that should be our identity: blue-collar.” With winter homecoming ceremonies on tap for halftime, the Tigers decided to spoil the Indians’ night early on. Tahlequah opened the game on an 8-0 run, thanks to two 3-pointers by Rusty Peace, who finished the game with nine points. The Tigers, eventually, turned the 8-0 run into a 35-20 halftime advantage. “We wanted to get off to a quick start, and we did,” Hayes said. “That was very, very instrumental.” The Tigers were able to open to a large lead because of defensive pressure by Jon Griggs, Lain Wright, Collin Scarsdale, Peace, Kevin Busch and the rest of the Tahlequah guards, who combined to shut down Catoosa’s leading scorers, Brandon Haynes and Braeden Beer. Haynes, who picked his third and fourth fouls in the second quarter, and Beer combined to score 10 points in the first half. The Indians narrowed the deficit to three (43-40) with 4:53 remaining in the contest on Haynes’ only 3-pointer of the game. But that’s as close as Catoosa would get with the home team going into a drought until the final minute of the game, when the outcome was already decided. In the end, Haynes tied for a team-high 12 points with Zach Olivarez. But Haynes, who averages 16.4 points per contest, was 3-of-12 from the field and 1-of-4 from behind the 3-point line. “He (Haynes) finished with 12 and every one of those baskets was hard-fought,” Hayes said. “We were wearing him out. Lain, Rusty, Quincy (McDowell), Kevin and Collin, what a great defensive job they did on Haynes and Beer. What a great defensive job by all of our guards tonight.” Griggs joined Stovall in the double-double category with 12 points and 10 assists. But the Tigers’ senior point guard knew it was more imperative to shut down Haynes and Beer on the defensive end. “That was really important,” said Griggs, who had 11 points his 12 points before halftime. “We knew they didn’t really have any other offense besides them (Haynes and Beer).” Catoosa’s only other scorer in double figures was Jake Magness, who was 3-of-15 from the field. As for Stovall, Hayes said Friday night’s performance is what the senior post player should be doing in every game. “He can control the paint against anybody we play,” Hayes said. “Adam just has to embrace being a centerpiece of what we are trying to do here. And he should double-double every night, and if he doesn’t, he needs to be disappointed.” Tahlequah 55, Catoosa 49 (boys) THS 16 19 6 14 – 55 Catoosa 7 13 12 17 – 49 Tahlequah (10-8, 4-4): Adam Stovall 21, Jon Griggs 12, Rusty Peace 9, Lain Wright 5, Collin Scarsdale 5, Spencer Risenhoover 2, Kevin Busch 1. Catoosa (5-12, 3-4): Brandon Haynes 12, Zach Olivarez 12, Jake Magness 11, Braden Beer 9, D. Poorboy 4, C. Hein 1.