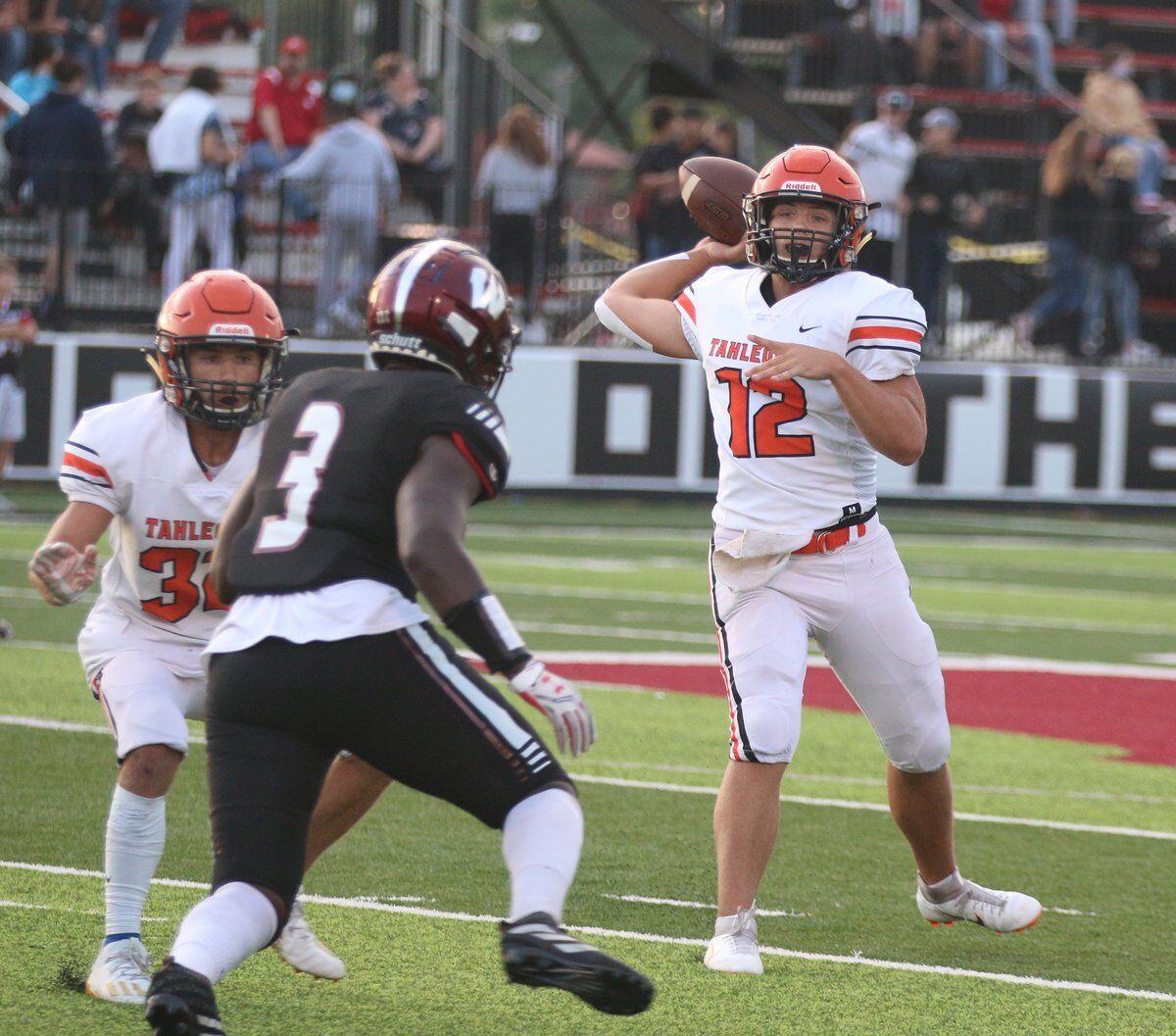 Tahlequah quarterback Tyler Joice passes against Wagoner on Sept. 11. Joice threw for 170 yards and had two touchdowns in the Tigers' 47-0 win over Memorial last week. 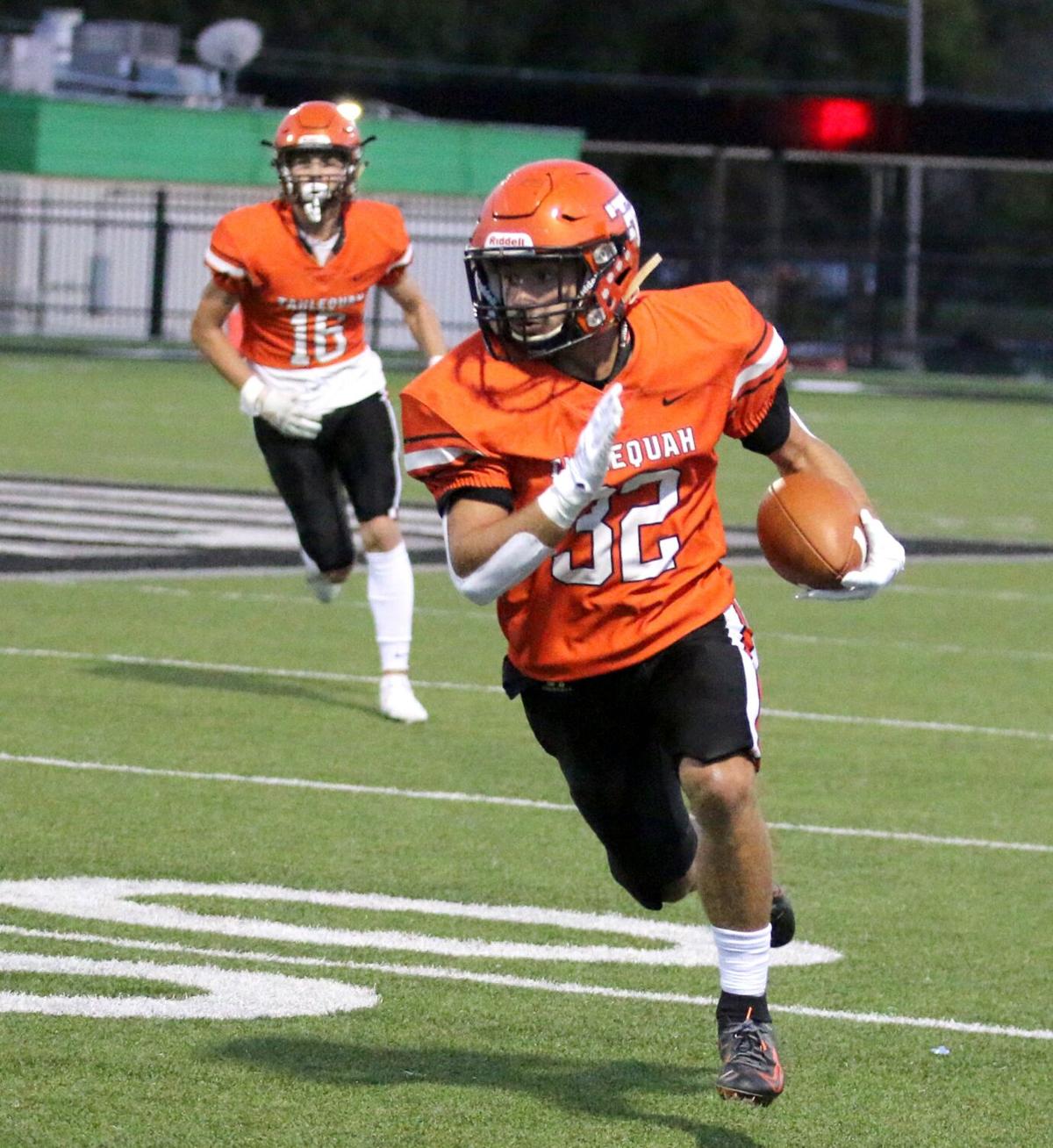 Tahlequah quarterback Tyler Joice passes against Wagoner on Sept. 11. Joice threw for 170 yards and had two touchdowns in the Tigers' 47-0 win over Memorial last week.

Tahlequah will go into its regular season finale at second-ranked and unbeaten Collinsville on Friday with a full head of steam.

The Tigers, 5-3 overall and 4-1 in District 5A-4, have rolled to three straight convincing wins, including back-to-back shutout wins over Glenpool and Tulsa Memorial.

Tahlequah has made several shifts and bounce backs over the course of the season that have led to the current rise.

“Pivotal moments throughout the course of the year, I can go back to the Wagoner game which was kind of eye-opening to all us,” Tahlequah head coach Brad Gilbert said. “We competed against one of the best teams in the state. It gave us some confidence, being a team that was inexperienced. They were as good as anybody we were going to play all year. It took all four quarters for them to beat us.

“The following week with us losing the Sallisaw, and we had to find an opponent, and we found McAlester...I thought we played well and felt good about where we were, and if anything, we felt better about ourselves offensively. We found an identity and retooled our scheme. That was another step in the right direction.”

There was a COVID-19 interruption that eliminated the Pryor game the evening before at the end of September.

“The whole situation with Pryor and the disappointment of not being able to play, and not knowing what was to come...all those questions. You’re sitting at home on a Friday night, and it’s so weird,” Gilbert said. “It was an adjustment for all of us. I remember calling a lot of the seniors and letting them know. We had a team meeting that next morning and tried to answer as many questions as we could that they might have. It was just a little different, and you hear it a lot..the normal this year is the unknown. We took that next week as a breath of fresh air when we got to go back to practice the following Monday and knew we were going to play that Friday. There was some excitement and new life.”

There was the disappointing loss to Sapulpa where the Tigers had two second-half leads that slipped away. They have since gone on their current three-game win streak.

“There’s all kinds of adversity we have to deal with, and that’s just the norm this year,” Gilbert said. “Adversity allows you to see who you are and builds character. We felt good offensively in the Sapulpa game, even though we lost. We had a young man lose a loved one that he found out about after the game. We rallied around him and then it kind of set us in motion for the next three weeks. We rattled off three wins and we played pretty good in all three of those wins.”

Tahlequah’s progress continued to grow against Memorial in a 47-0 win last week at Doc Wadley Stadium.

Junior quarterback Tyler Joice and junior running back Malik McMurtrey led an offense that produced 387 total yards. Joice completed all nine of his pass attempts for 170 yards and had touchdown passes to Kobey Baker and Tanner Christian, and McMurtrey went over 100 yards for a third straight week, rushing 16 times for 136 yards with three TDs.

The defense picked up its fourth shutout of the season and forced three more turnovers, pushing its season total to 21. The Tigers limited Memorial to 113 total yards. Senior linebackers Angel Quezada and Carson Ferguson combined for 25 tackles.

“Collinsville’s a physical football team, so we’ve got to match physicality on both sides of the ball,” Gilbert said. “They’re just well coached and very sound, and are rarely out of position. They’re going to make you earn every yard that you get. I would put Collinsville up there with Wagoner. We’ve got a big challenge, and we’re excited about it.”