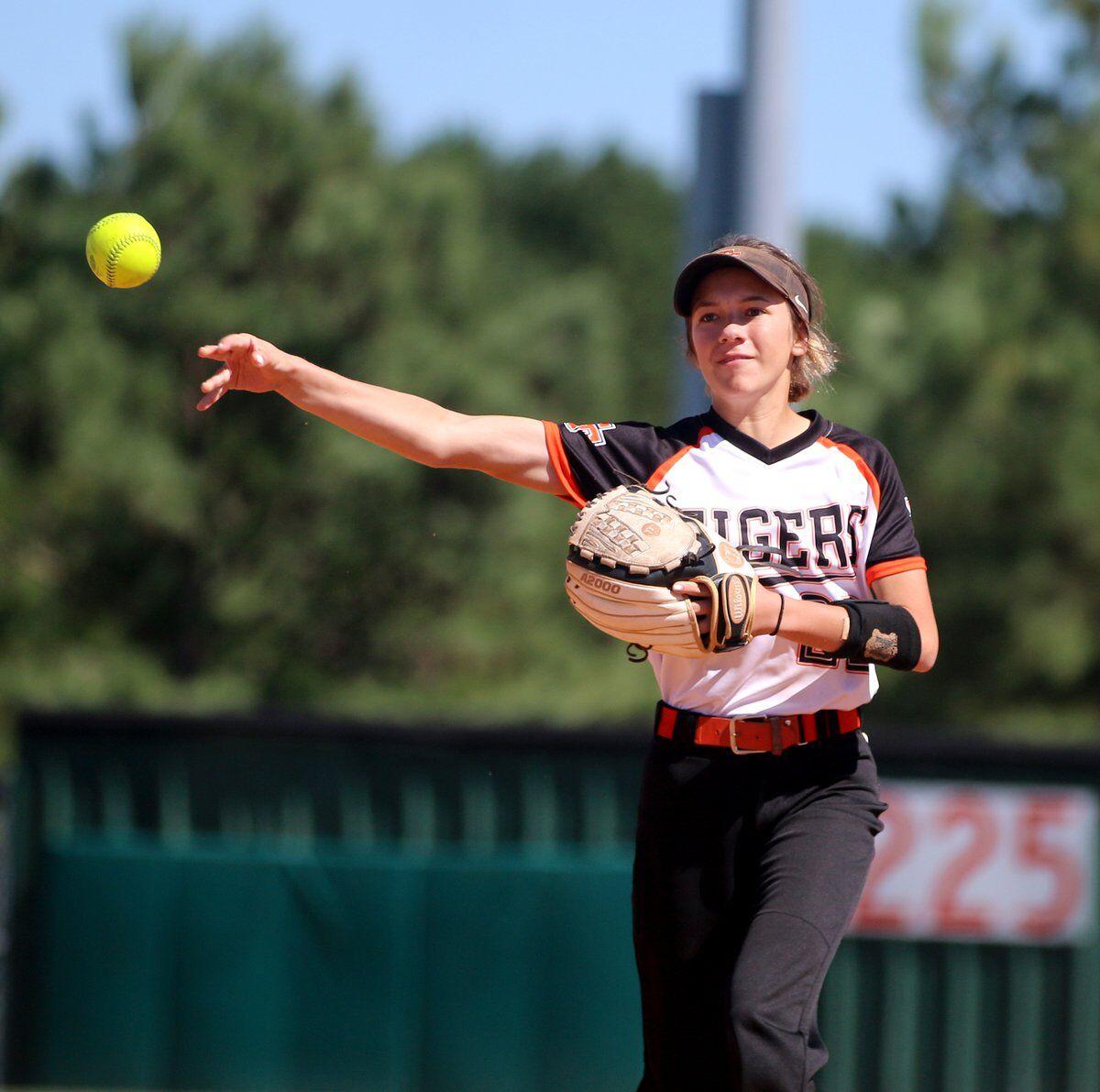 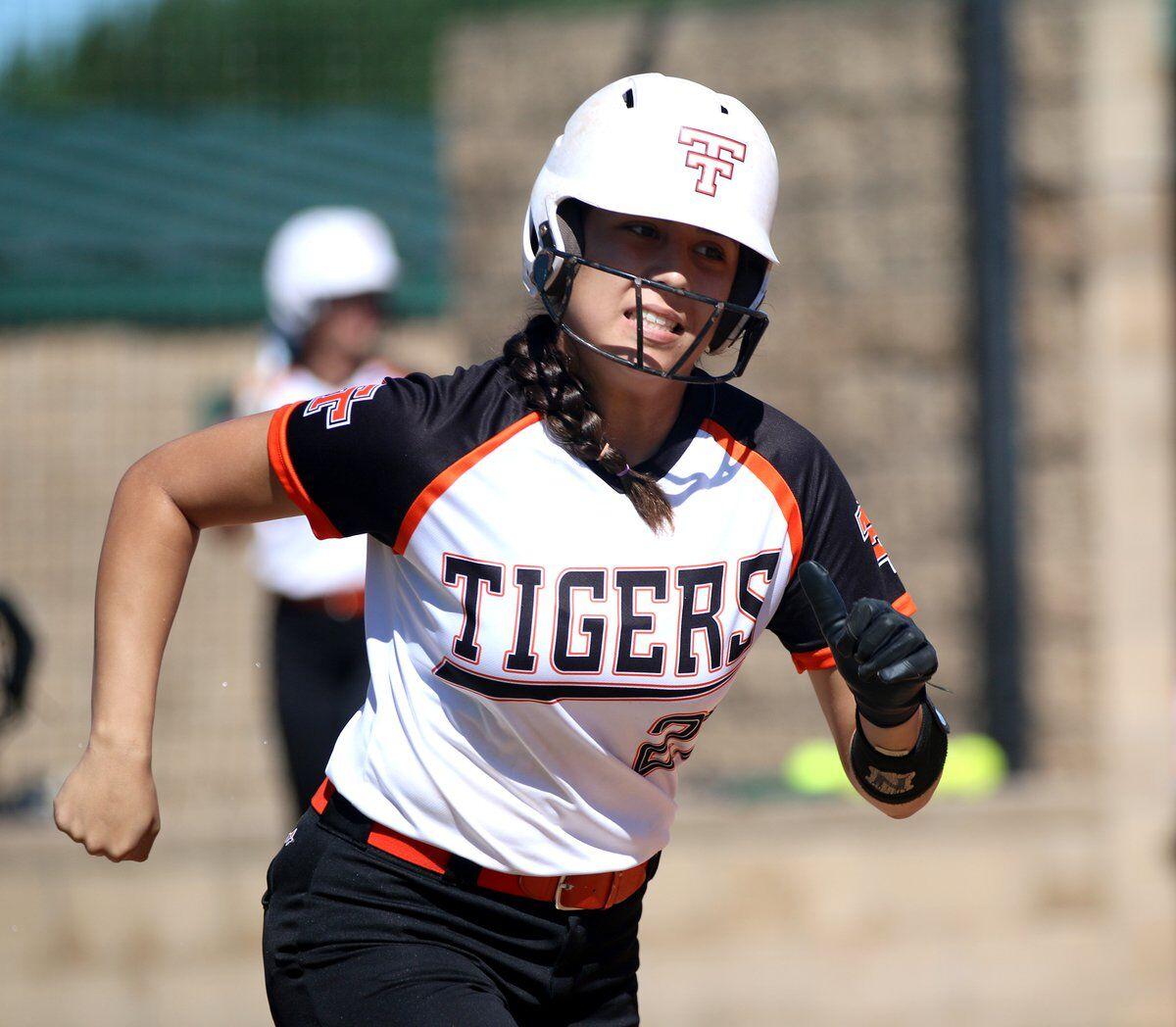 Mia Allen combined for a hit and an RBI in Tahlequah's two home wins over Ada Tuesday afternoon.

Mia Allen combined for a hit and an RBI in Tahlequah's two home wins over Ada Tuesday afternoon.

Tahlequah claimed a Class 5A Regional home site with a sweep of Ada Tuesday afternoon in Tahlequah.

The Lady Tigers, who just needed one win in the doubleheader to finish second in the District 5A-4 standings, rallied from a 4-0 deficit to defeat the Lady Cougars, 5-4, in the opener and bombarded Ada, 20-0, in game two.

“That’s four or five games here in the last couple of weeks where we’ve come from behind and found a way to win,” Tahlequah head coach Chris Ray said of the win in the opener. “It’s just a sign of a team that’s starting to grow up and just figure out how to win games. It was a good day. Our No. 1 goal at the first of the year was to make sure that we finished first or second in the district and get a chance to host a regional, and we’re going to do that.”

Mikah Vann put down a perfectly placed bunt in the seventh to bring home Madi Matthews to lift Tahlequah to a walk-off win in the opener. Vann’s bunt followed two other well-executed bunts from Matthews and Lexi Hannah to set the table for Vann.

“We went back to what we like to hang our hat on, being able to bunt when we need to and utilizing our speed,” Ray said. “We were able to do that and laid down three nice bunts and were able to put some pressure on them and score that winning run.”

Ada put immediate pressure on the Lady Tigers with two runs in the opening frame and added two more runs in the third off Vann, who in a starting role allowed four earned runs on four hits over 2.1 innings.

Tahlequah started to chip away in the fourth with a pair of runs, both of which came with two outs. Jayley Ray singled to left-center field to bring home Charlea Cochran for the first run, and Paisley Qualls followed with an RBI single to left that brought across Jersey Retzloff.

The Lady Tigers got even in the fifth when Hailey Enlow doubled down the left-field line and scored on a two-base error. Mia Allen got THS to within a run on an RBI groundout that pushed across Hannah.

Senior pitcher Bailey Jones tossed 4.2 scoreless innings of relief to record the win. Jones, who gave up two hits, collected six strikeouts and did not issue a walk. She retired the final seven batters she faced, three of those on strikeouts.

“It was all made possible because we were able to stop the bleeding after the third inning with Bailey,” Ray said. “She came in with a little different look from the right side and she was able to hold them right there and allow us to battle back and get it tied up. I think when we got it tied up and then we went out the next inning and held them, I think it took the momentum away from them. You could kind of see the wind go out of their sails.”

Tahlequah, who closed with 10 hits, was carried offensively by Hannah and Enlow. The juniors had two hits apiece and combined for two runs scored. Vann, Cochran, Ray, Qualls, Matthews and Nevaeh Moreno each singled once, while Vann, Allen, Ray and Qualls each drove in a run.

The Lady Tigers carried over their momentum into game two by erasing Ada with a 14-run first inning where they had 11 of their 18 hits. All 14 runs came before Ada could record an out. Seven of the hits came consecutively — Enlow, Cochran, Ray, Qualls, Cochran and Matthews each singled, and Hannah highlighted the outburst with an inside-the-park grand slam to left field that made it 10-0.

Ray paced the lineup with a perfect 4 for 4 outing. Ray scored twice and drove in one run. Vann, Enlow and Qualls followed with two hits apiece, and both Hannah and Enlow led with four RBIs. Qualls knocked in a pair of runs.

Vann and Kloie Vertz both saw time in the pitcher’s circle. As the starter, Vann pitched two scoreless innings and did not give up a hit, while notching five strikeouts and not issuing a walk. Vertz gave up one hit in one inning of relief.

The Lady Tigers will visit Fort Gibson on Thursday, and face Bixby and Deer Creek Friday at the Bixby Festival.