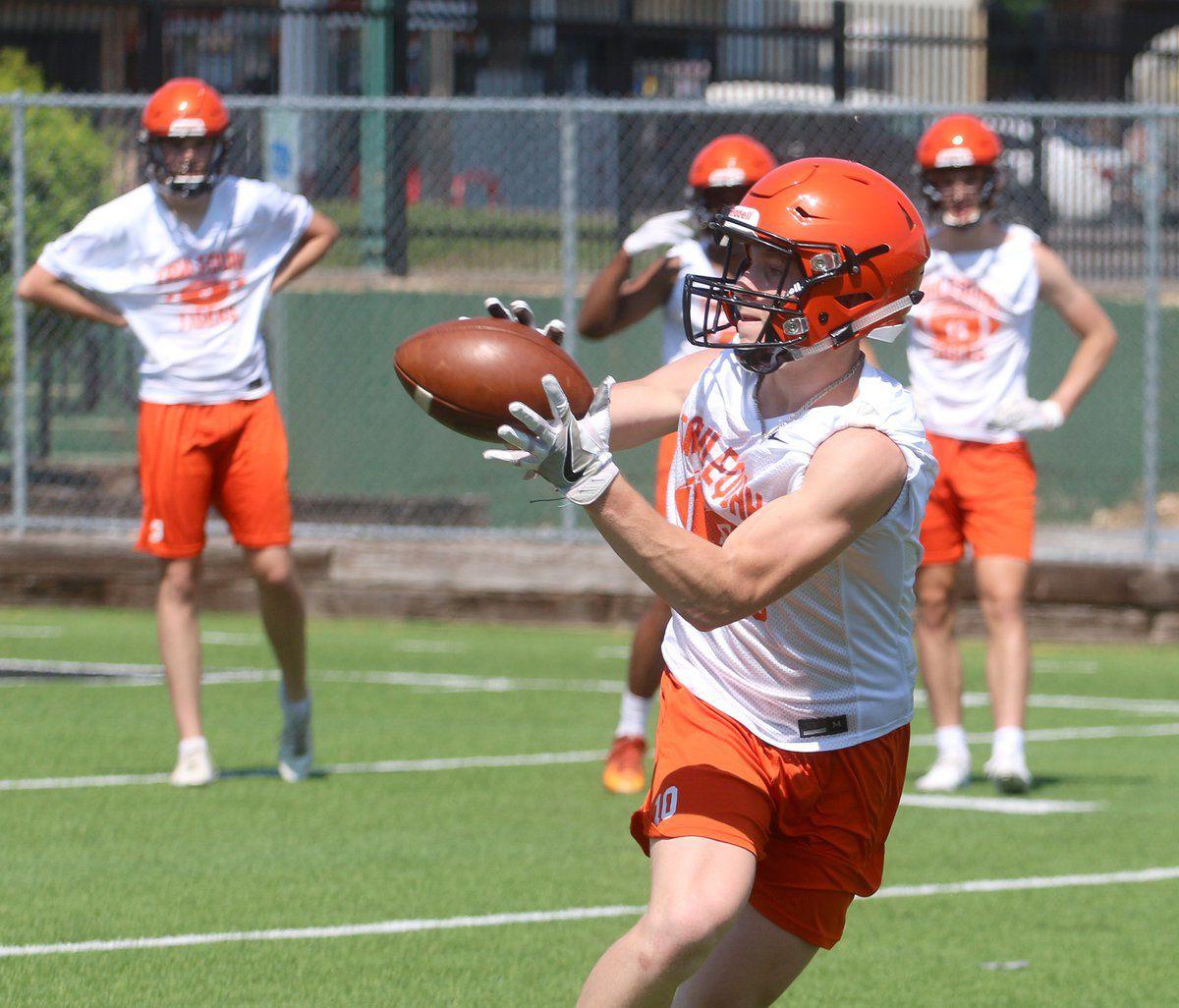 Tahlequah senior-to-be receiver Kobey Baker catches a pass during a spring practice on May 14, 2019 at Doc Wadley Stadium. 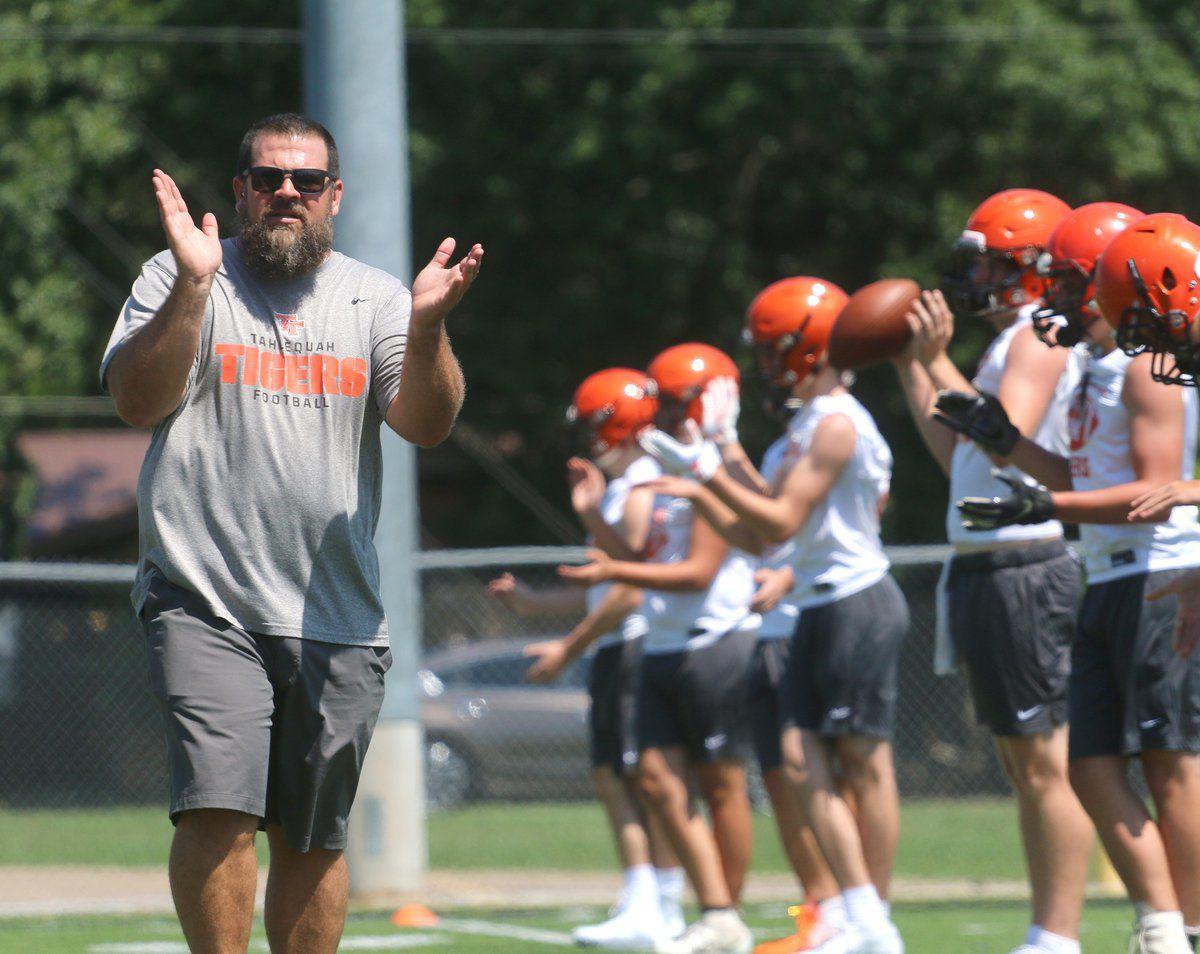 Tahlequah senior-to-be receiver Kobey Baker catches a pass during a spring practice on May 14, 2019 at Doc Wadley Stadium.

It was a long road to get back to a team concept for the Tahlequah football program.

Monday was the starting point for the Tigers and head coach Brad Gilbert after what the COVID-19 pandemic has railroaded since March.

Now, it’s a team function again, albeit a cautious one.

“We’re back in a routine and kids have responded well,” Gilbert said Wednesday morning. “Everything we’ve asked them to do, they’re doing. It’s not something that comes natural, wearing masks and trying to have a little social distance. That’s not something we’re really accustomed to doing, but we’ve adapted and we’re doing a good job of it. I think as long as we’re paying attention to what we’re supposed to, I think we’ll be fine. The kids have handled it really well.”

“The kids want routine, they need routine, they want structure,” defensive coordinator Keith Wilson said. “The one thing that’s opened my eyes up, and a lot for the kids, is you can’t take things for granted because when something is taken away from you, you don’t really realize it...it’s kind of gotten my battery recharged. The kids are ready to roll. They haven’t got to do anything or be with us for four months. You can’t take time for granted. It was good that everybody got to be back with their families, and there was more family time which was good for us as a society. I miss these cats and it’s good to be back with them. You can only do so many Zoom meetings and texting and Facetime and all that stuff. We’ve got to get back to real life. The only thing challenging right now is I don’t know what to do with my hands. I don’t know if I’m supposed to fistbump, shake hands, clap..I don’t know. But it’s good to be back, it’s good to see the guys.”

It’s a different offseason in more ways than one for Gilbert.

The Tigers missed a much-needed two weeks during the spring. There’s no on-the-field drills yet. Workouts will be limited to the weight room until individual camps begin in July.

“The evaluation is kind of tough, but we’ve been evaluating these young men over the past year or two,” Gilbert said. “We know a little about who they are and what they can bring to the table and obviously they’ve got the next three to four months to prove that and to show us what areas they’ve grown in and where they’ve matured. The evaluation isn’t impossible right now but it’s difficult. As we move forward, that evaluation period will become more available and the opportunity will be there. The kids, by what they do in the weight room, how they interact with each other and being a good teammate, all those things go into consideration. But things are different, there’s no question about that without spring ball.”

They’re back to a format they’re acclimated to.

More than anything, they want to be teammates again.

Baker finished with 405 all-purpose yards last season. As a receiver, he had a team-high 29 receptions for 333 yards and a pair of touchdowns. Baker also rushed for two TDs. Defensively, the defensive back recorded 51 total tackles and had two interceptions.

“It feels good to be back with the team, working hard,” Baker said. “We’re ready to build a bond and get back out on the field.”

Leathers had 78 tackles as a junior defensive back. He also had a team-best three interceptions, six pass breakups and a fumble recovery.

“It’s great to be back with your teammates because you just build the bond back again and get close again,” Leathers said. “We’re all getting back tough again, doing our maxes, getting strong again.”

Quezada was second on the team in tackles with 95 as a linebacker. He had six tackles for losses, two quarterback sacks and caused one fumble.

“Whenever I was in quarantine I didn’t have set time so sometimes I would wake up later and I was getting a lot lazier,” Quezada said. “Now that we’re back in the grind we have a set time, a schedule and everything lined out. I have people to push me now a lot harder than I would have myself.”

Christian had three catches for 67 yards and a score last year.

“It means a lot,” Christian said of being back. “I like to see everyone in here. I think we all have the same mindset and attitude. We want to get back to work. We can't really interact as much in quarantine. I think our senior leadership is a big deal about it. We all had little groups, interacting with everybody, so I think we handled it pretty well. We all got together and worked. Now we’re back here like nothing ever happened. We have the same work ethic and we’re ready to get back on the field.”