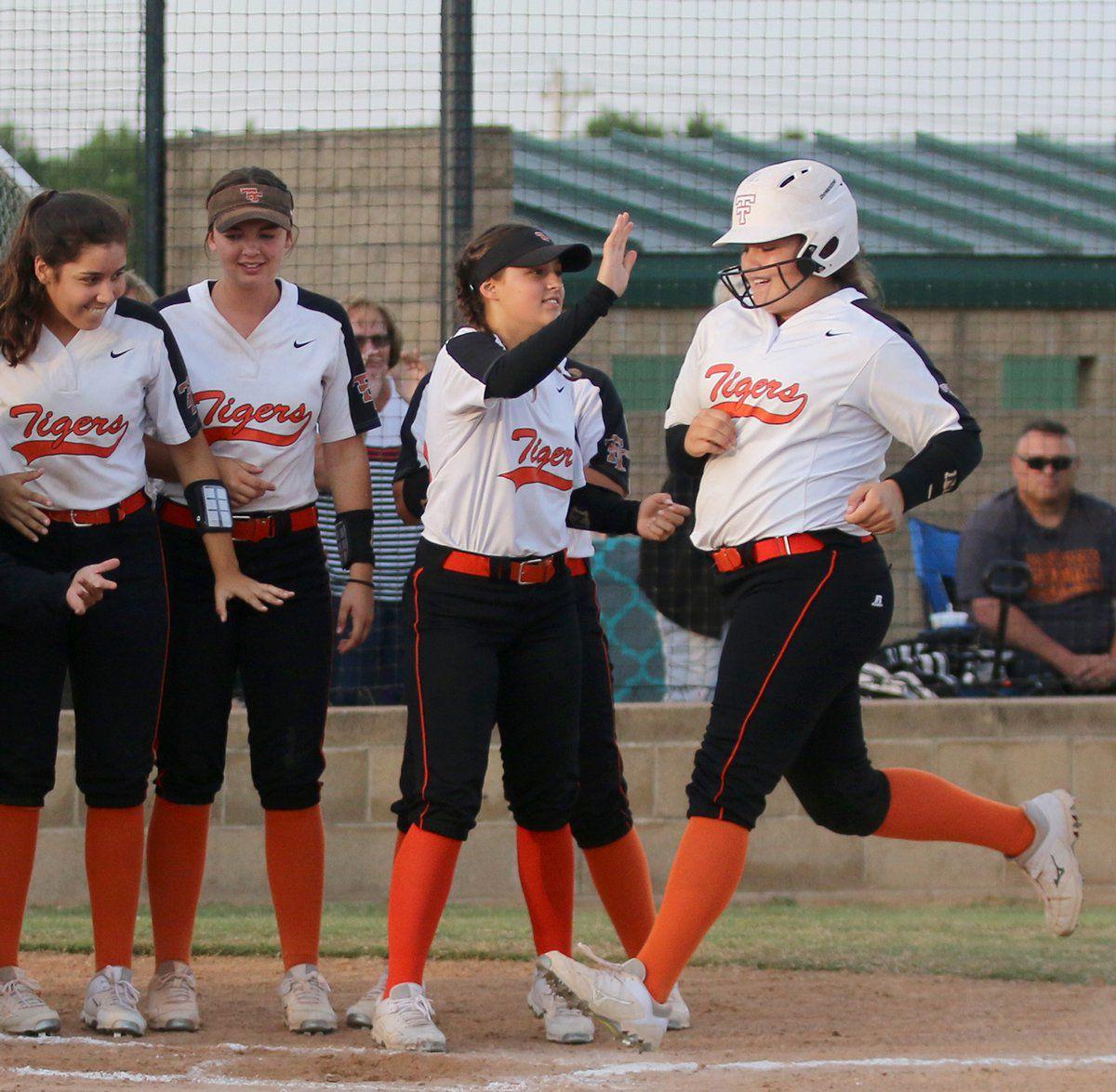 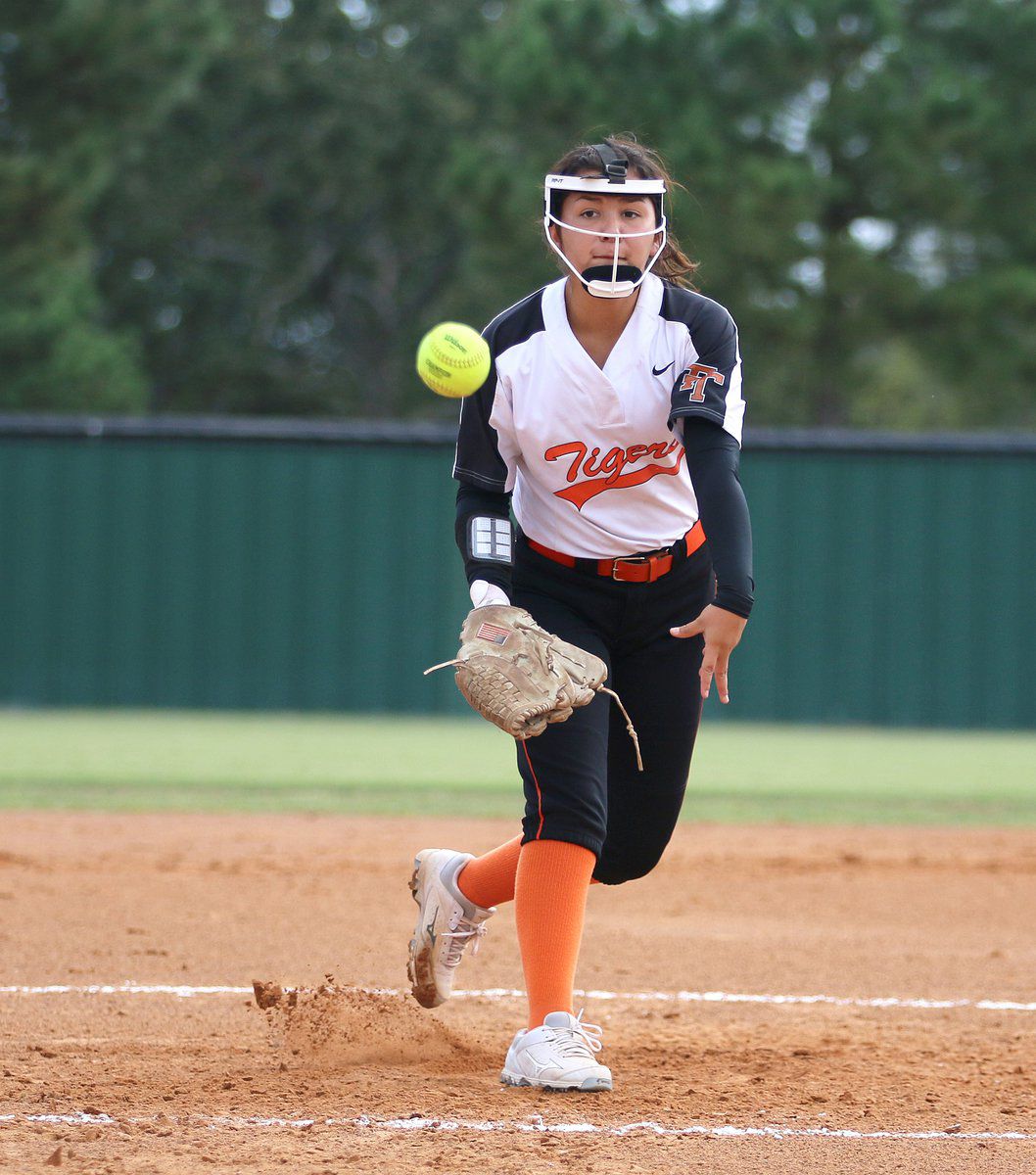 Tahlequah put itself within one win of reaching a third consecutive Class 5A State Tournament Wednesday with wins over Tulsa Edison and Claremore in the Tahlequah Regional Tournament.

The Lady Tigers defeated Claremore, 8-1, to move into Thursday's championship game at noon. They will face the Claremore/Tulsa Memorial winner. An if-necessary game would be played at 2 p.m.

Claremore and Memorial will open Thursday play in a loser's bracket game 10 a.m.

Timely hits from the offense and junior Bailey Jones' ability to work out of jams proved to be the difference in Wednesday's nightcap against the Lady Zebras.

Tahlequah, now 21-16 under head coach Chris Ray, put the game out of reach with a four-run fifth and was aided by two costly Claremore errors. All four runs came with two outs. Shortstop Jaydn Muns dropped what should have been a sure third out on a pop fly by Jayley Ray and it allowed Lexi Hannah, Betty Danner and Mia Allen

to each cross home plate and extend the Lady Tigers' lead to 6-1.

Hailey Enlow later reached on another error by Muns, allowing Ray to cross home plate and give the Lady Tigers a six-run cushion.

Tahlequah took the lead for good at 3-1 in the third with a pair of runs. Nevaeh Moreno and McKenna Wofford had back-to-back singles to start the inning, Danner drove in Moreno on a sacrifice fly to right field, and Allen lined a single to left to bring in Wofford.

Wofford, who finished with a game-high three hits and scored three runs, started the scoring in the home-half of the first with a leadoff home run to left field on a full count offer from Claremore starter Alyssa Poorboy.

Danner and Bailey Jones each had two hits for the Lady Tigers, who ended with 10 as a team.

Jones earned the win in a complete-game outing from the pitcher's circle. The junior gave up 10 hits but allowed just one run. Jones had one strikeout and issued one walk.

Jones escaped a bases-loaded jam in the second after forcing Muns to pop out. She also left two Lady Zebras stranded in the third and two more in the fourth.

Lady Tigers carried by Vann's perfect game, Danner's four hits and six RBIs in win over Edison: Mikah Vann tossed a perfect game and Tahlequah pounded out 16 hits in a dominating postseason opener Wednesday afternoon as the Lady Tigers cruised to a 26-0 win over Tulsa Edison to start the Class 5A Tahlequah Regional Tournament.

The top-seeded Lady Tigers, who move to 20-16 overall under head coach Chris Ray, scored 14 runs in the first inning to set the tone.

Vann, a freshman, retired all 15 batters she faced and collected 11 strikeouts over five innings.

Betty Danner and Mia Allen propelled the offense with a combined eight hits.

Danner knocked in a team-high six runs, two of those coming on a second-inning home run that cleared the left field wall and gave the Lady Tigers a 16-0 lead. Danner also had a pair of doubles. The junior second baseman now has 11 hits over her last 15 at-bats with 12 RBIs.

Allen, who also entered the game with a hot bat, went a perfect 4 for 4 at the plate with four runs scored and two runs batted in. Allen is hitting .647 over her last four games and has driven in eight runs.

Senior McKenna Wofford added a pair of hits from the top of the lineup, including an inside-the-park home run, and finished with two RBIs. Christeny Holt knocked in three runs, and Vann followed with two RBIs.

In the first-inning outburst, the Lady Tigers had six hits and reached base eight times on walks. Danner brought home three runs on a double and single, and Allen, Lexi Hannah, Jayley Ray and Bailey Jones each had RBI singles.

Tahlequah added seven runs in the third inning, pushed across three in the second, and had single runs in the fourth and fifth innings.