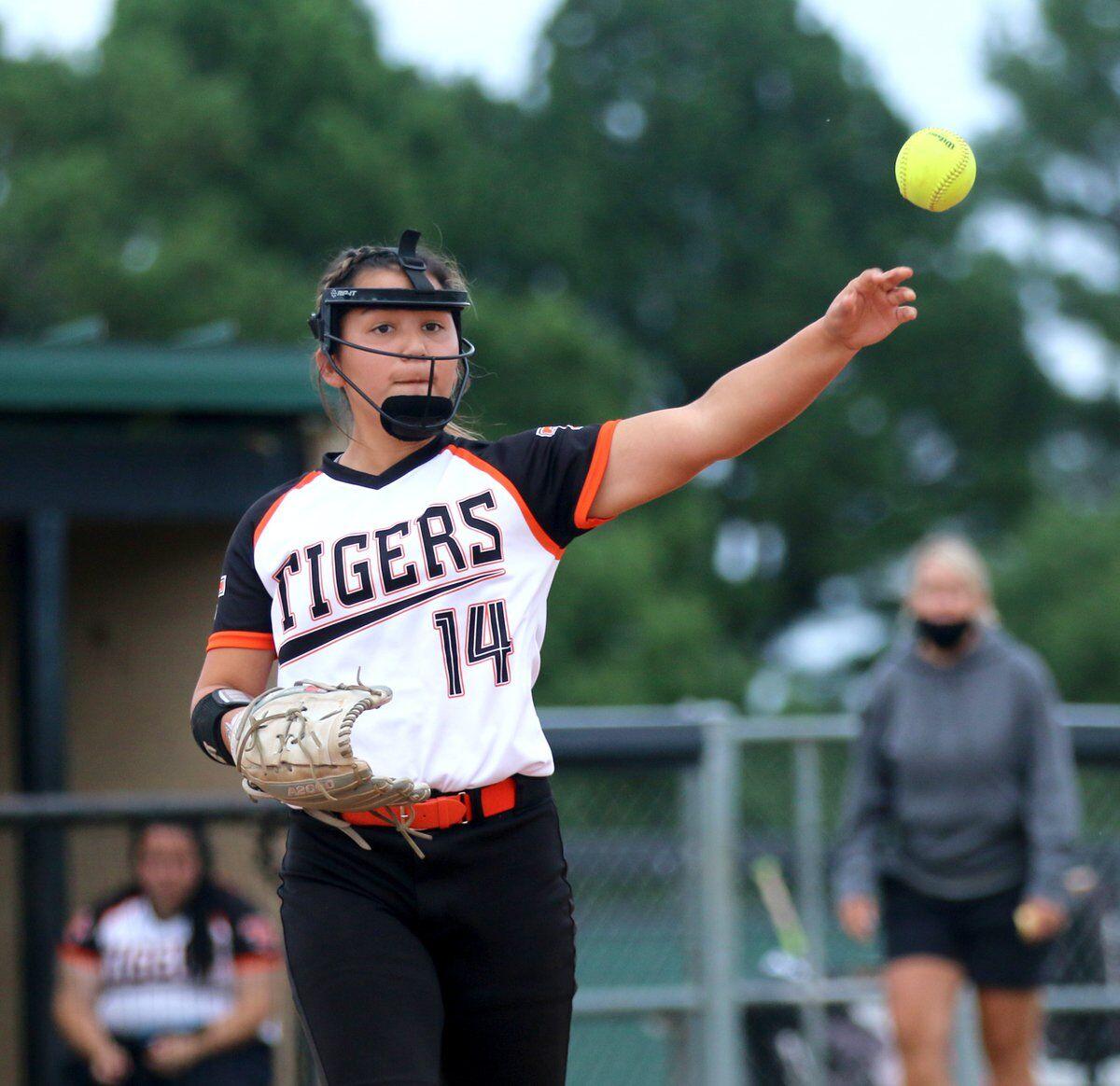 Tahlequah sophomore pitcher Mikah Vann throws to first base during the first inning Wednesday against McAlester. 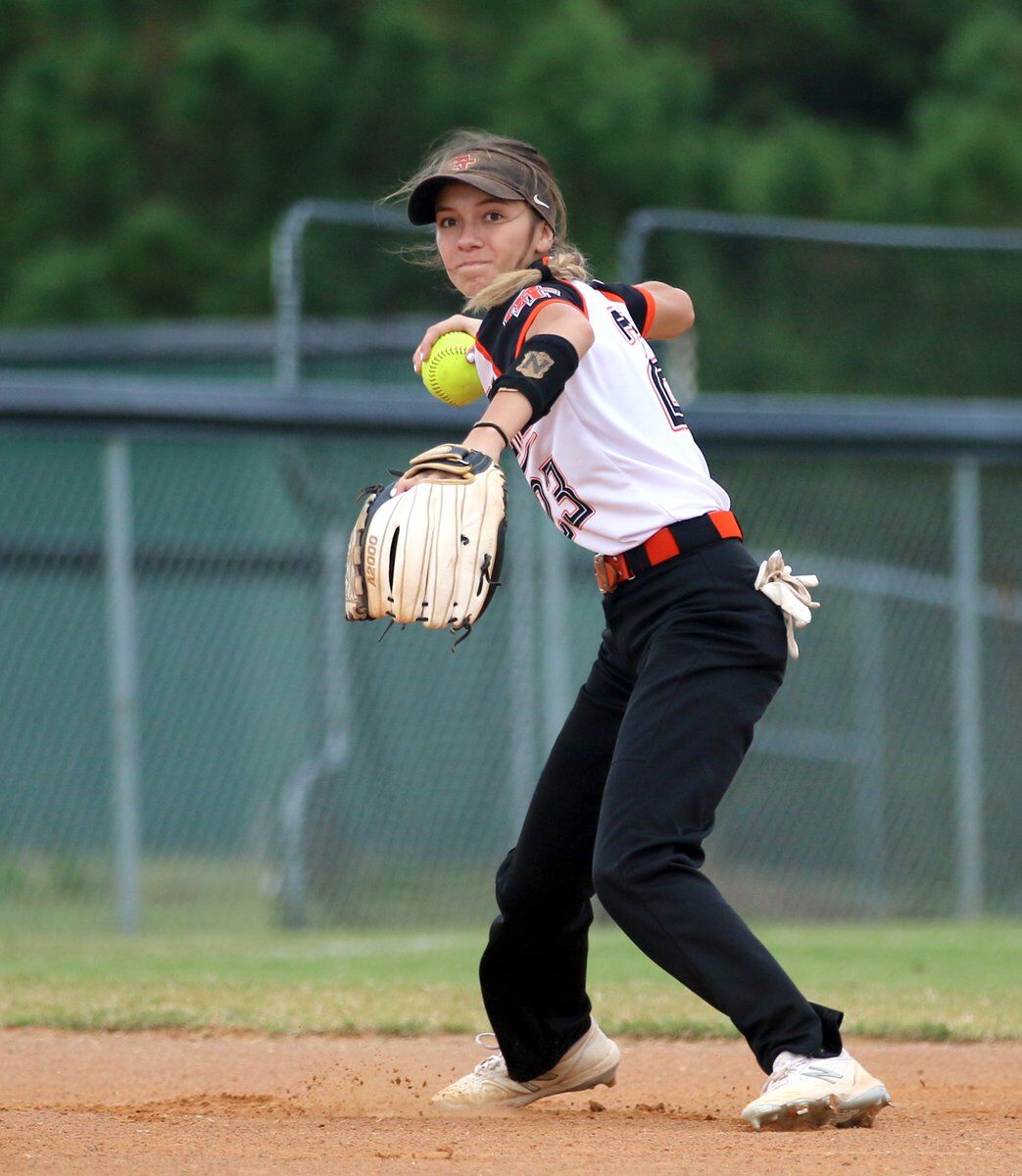 Tahlequah junior shortstop Lexi Hannah sets to throw to first base during the first inning Wednesday against McAlester. 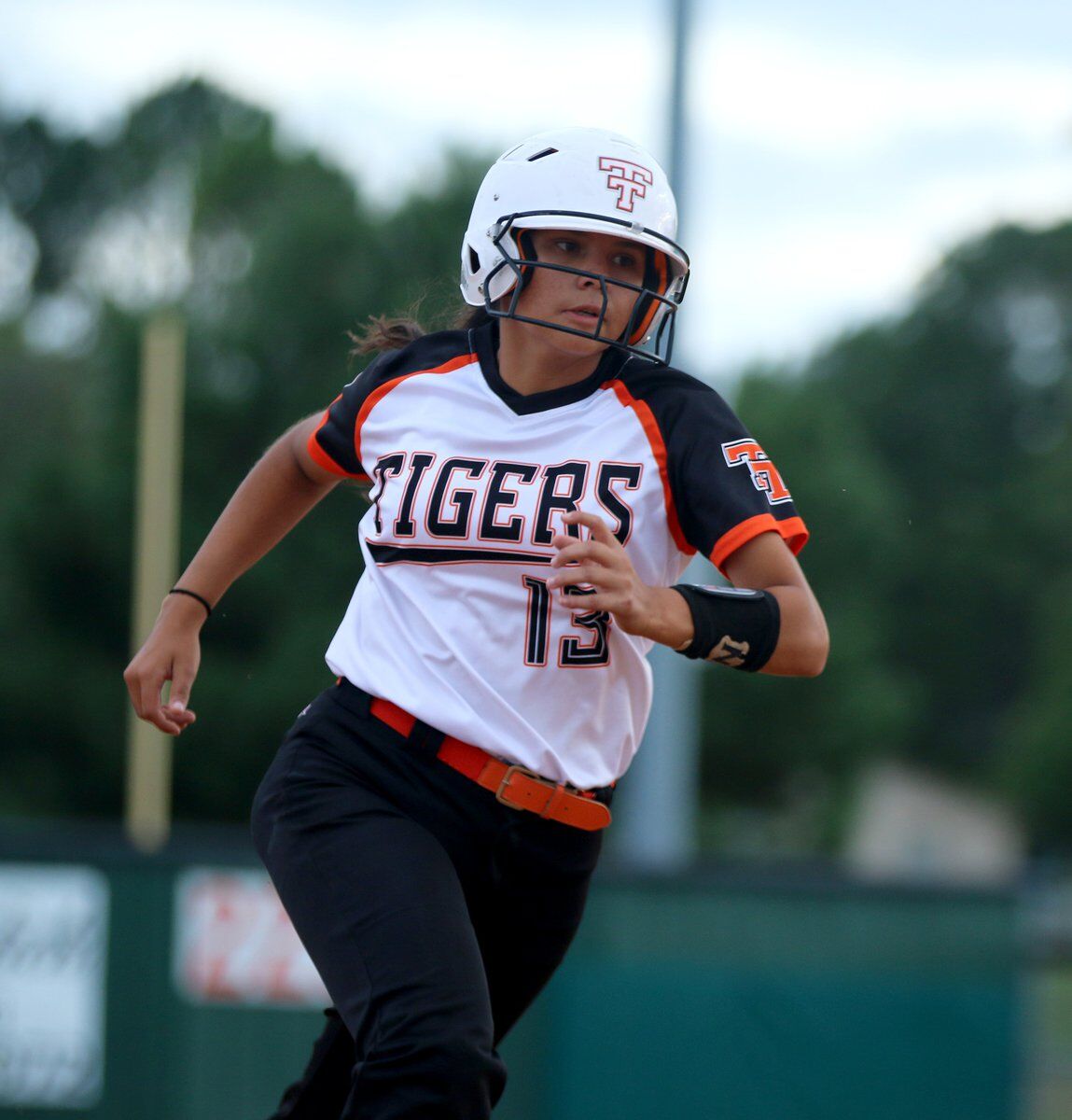 Tahlequah sophomore Jayley Ray runs the bases Wednesday against McAlester. Ray had two hits and drove in a run in the Lady Tigers' 10-3 win.

Tahlequah sophomore pitcher Mikah Vann throws to first base during the first inning Wednesday against McAlester.

Tahlequah junior shortstop Lexi Hannah sets to throw to first base during the first inning Wednesday against McAlester.

Tahlequah sophomore Jayley Ray runs the bases Wednesday against McAlester. Ray had two hits and drove in a run in the Lady Tigers' 10-3 win.

Tahlequah’s bats got busy in a game-deciding fifth inning Wednesday against McAlester in Tahlequah.

The Lady Tigers consistently hit the ball hard for the first time in weeks, scored nine runs, and went on to defeat the Lady Buffaloes, 10-3, in a crucial District 5A-4 contest.

The win moves Tahlequah to 12-11 overall and 7-2 in 5A-4 with district games against Durant and Ada (twice) remaining on the schedule. The Lady Tigers will host the Tahlequah/NSU Tournament beginning Thursday. They will take on Checotah (12:45 p.m.) and Broken Bow (4:15 p.m.) on the first day of a three-day tournament.

Against McAlester, the Lady Tigers had seven of their 11 hits, including five doubles, during the fifth and overcame a 3-1 deficit to take complete control.

“We barreled the ball up in that respective inning, and I thought we did throughout the entire game. We just hit a lot of balls right at them,” Tahlequah head coach Chris Ray said. “We had been struggling at the plate, so hopefully this is a confidence builder for us moving forward in our tournament. The last time we hit this well was against McAlester right before quarantine. It’s always a good thing...you can kind of see some smiles on the kids’ faces and I think we kind of quit pressing a little bit at the plate.”

Charlea Cochran gave Tahlequah the lead for good with the first double of the fifth when she went to center field and brought home Lauren Walker and Mia Allen to give THS a 4-3 advantage. The Lady Tigers then received back-to-back doubles from Jayley Ray and Paisley Qualls and pushed their lead to 6-3. Jay drove in Cochran, and Qualls knocked in Ray.

“I think it’s more of a confidence booster as far as their approach at the plate,” Ray said. “It’s good to kind of have one of these games here toward the end of the season, so hopefully we can just keep that momentum going over the next couple of weeks.”

The Lady Tigers were led offensively by Vann’s 3-for-4 performance. Vann also drove in a pair of runs, matching Cochran for game-high honors. Hannah, Allen and Ray finished with two hits apiece.

Tahlequah, who defeated the Lady Buffaloes, 12-0, in McAlester on Aug. 25, went up 1-0 in the first inning when Hannah reached on a hit by pitch, advanced to second base on a Vann groundout, and then stole both third and home.

The Lady Tigers also received quality pitching performances from Vann and Bailey Jones. In a starting role, Vann allowed three earned runs on three hits over five innings. The sophomore recorded seven strikeouts and issued one walk. In two innings of relief, Jones gave up two hits, struck out one and walked one.

“I told [Bailey] after the Jenks game on Saturday night that I thought that was the best she’s ever thrown,” Ray said. “She competed against Jenks’ ace and they went toe-to-toe. We’re going to need [Mikah and Bailey] down the stretch. I’m glad to see that Bailey’s throwing well, and Mikah threw better today than she had the last two games.”

“It’s starting to trend more toward the positive end of the spectrum now than the negative end,” Ray added.

Tahlequah is in a fight with Durant and Ada to host a Class 5A Regional Tournament. The top two teams in the standings will get to host. Durant is currently 7-1, while Ada is 6-2.