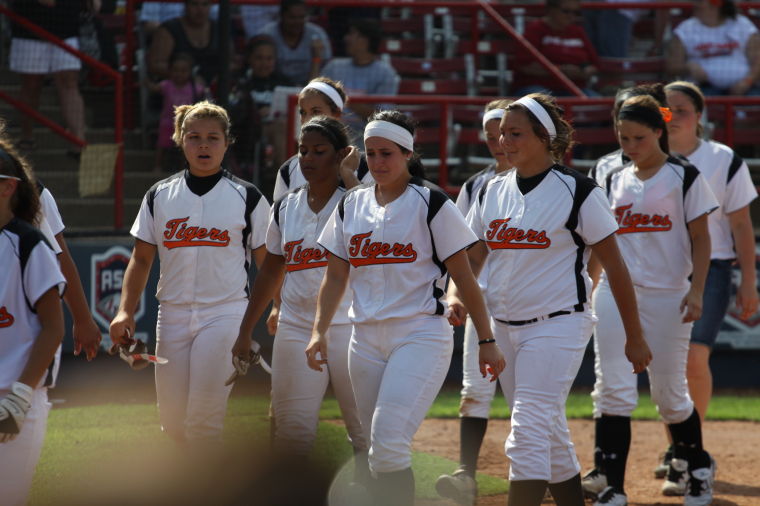 Tahlequah players walk back to their dugout after losing to Union, 12-5, in the Class 6A state tournament quarterfinals on Tuesday. 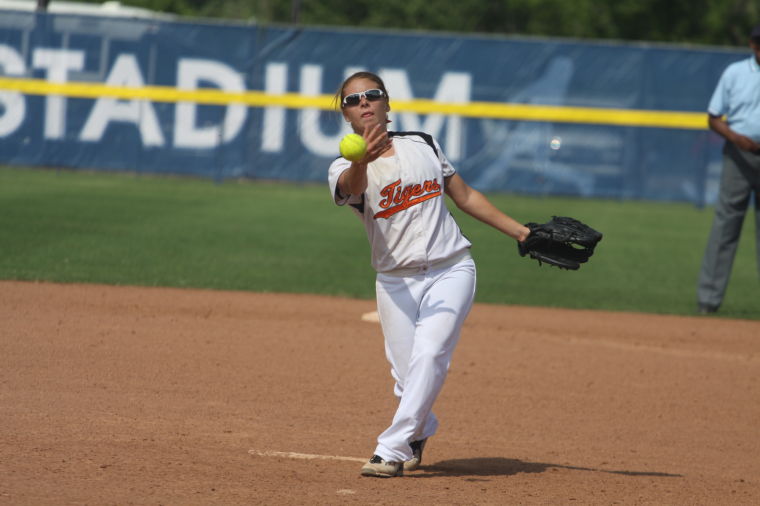 Tahlequah pitcher Jessica Blalock delivers a pitch during the Lady Tigers' 12-5 loss to Union at the Class 6A state tournament in Oklahoma City on Tuesday.

Tahlequah players walk back to their dugout after losing to Union, 12-5, in the Class 6A state tournament quarterfinals on Tuesday.

Tahlequah pitcher Jessica Blalock delivers a pitch during the Lady Tigers' 12-5 loss to Union at the Class 6A state tournament in Oklahoma City on Tuesday.

OKLAHOMA CITY — Tahlequah coasted past Union in one game this year. The Lady Tigers also posted a come-from-behind victory against Union.

The third matchup between the two clubs? All Union.

The Class 6A No. 7 Lady Redskins erased an early four-run deficit and ran away with a 12-5 victory over second-ranked Tahlequah on Tuesday at ASA Hall of Fame Stadium in Oklahoma City.

"I knew it was a tough draw," Tahlequah coach Matt Cloud said. "(Union) is good. I put them no lower than four in the rankings all year."

Tahlequah (38-3) scurried to a 4-0 lead in the second inning, with RBI singles from Bub Peters, Jessica Blalock and Whittney Whittmore.

But once Union got on a roll offensively, there was no stopping it.

The Lady Redskins pounded out 17 hits, led by Courtney Dobson's 2-for-4 effort, which included four runs batted in.

But it was the bottom of Union's batting order that hampered Tahlequah's title quest. The final four hitters in Union's lineup combined for eight hits, five runs scored and three RBIs.

"I think we gave up three or four runs on girls we walked," Cloud said. "In this game, if you walk anybody, that's just giving them runs."

After Union went up 6-4 after through 3 1/2 innings, Tahlequah got within one when Haley Martin scored on an error by Union shortstop Kelsey Goodwin. But Tahlequah only managed two base runners in the final three frames.

"Somewhere along the line we've got to relax," said Cloud, whose team came in averaging 11.3 runs per game. "...I think when (Union) got a little bit of momentum, I don't know if we thought we could do it. But tip your hat; they were better today."

For Tahlequah, it's the second year in a row with a first-round exit in the state tournament. But Cloud said his club couldn't have put in more effort to win a title.