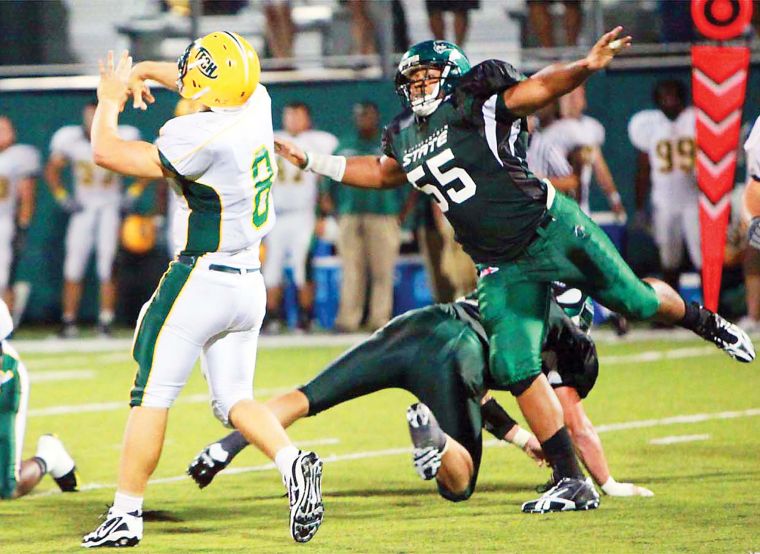 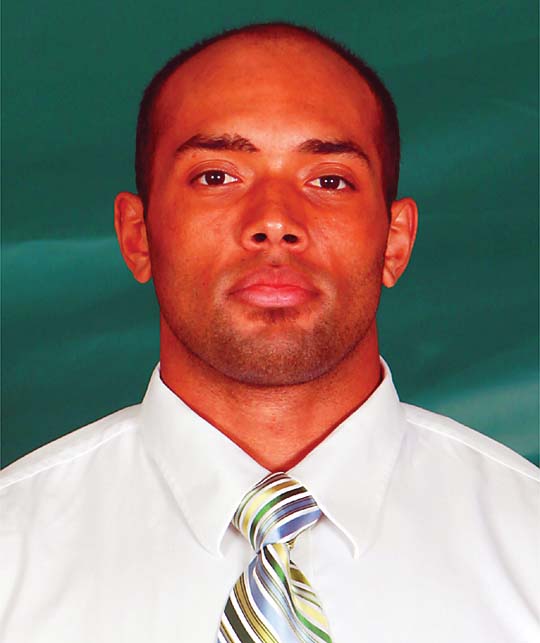 Caom Hansen had never been to Oklahoma. And there’s only reason why he’s here now: football.

“Now that I look back at it (the recruiting process), there’s probably not anything that would have brought me out here besides football,” said Hansen, who was courted by Northeastern State and ended up in Tahlequah prior to the 2009 season. “But it’s been a good opportunity, learning to love a new place – a place I thought I would never have any affiliation with.”

The soon-to-be senior defensive end from Mountain Home, Idaho – which is approximately 45 miles southeast of Boise – landed in Green Country after a two-year stint at Sacramento City Junior College, thanks to a family tie within the NSU coaching staff.

“He played for my cousin (Ross Evans) at Sacramento City Junior College,” said RiverHawks' head coach Kenny Evans. “Coming from Idaho and California is a long way, but there was a connection.”

“He’s been nothing but a pleasant surprise since he came here,” said Evans, whose RiverHawks went 2-9 last season. “...He showed a lot of ability in junior college, and he is a quality person.”

After aiding SCJC to the 2008 Mid-Empire Conference championship, Hansen joined the RiverHawks prior to the 2009 campaign, coming up with nine total tackles, two tackles for loss and one sack. He started six of the 10 games he played in, labeling his first season at NSU a “transition year.”

“I think we were still not mature enough to handle [certain things],” said Hansen, who originally signed with Western Athletic Conference powerhouse, Boise State, out of high school. “A lot of things changed last year, and we kind of had to grow into those things a little bit.”

Saying he and his teammates have already remedied the ailments, Hansen reiterated that 2010 will be a vast disparity from last season.

“This year, we’ve gotten with those changes,” Hansen said. “People are working harder, realizing the hard work it’s going to take [to be successful].

“We’ve had the time for that hard work to pay off, and we understand, a little bit more, what this is all about – it’s not just Saturday football; it’s a lifestyle.”

Hansen’s leadership qualities are not just limited to the playing field. Listed as one of starting defensive ends on the spring depth chart, with Sequoyah graduate Travis Boswell, Hansen takes charge by setting a good example for his teammates – on and off the gridiron.

“He’s in pre-med, and he had a 4.0 (grade point average) this last semester,” Evans said. “He’s great for this program because he is a blue-collar worker and leads by example.”

And while Hansen doesn’t consider himself one of the vocal leaders on the field, he knows his actions speak volumes.

“I’m not really the vocal leader,” he said. “I try to lead by example. But everyone is a leader since everybody draws from one another, so everybody has to be doing their part.”

• You’ve been in Oklahoma for two years, how would you compare Oklahoma to Idaho?

I’m going to give you my impression of Oklahoma vs. the West Coast. When you here all the jokes on TV, they’re mostly about Oklahoma. And when you hear about the problems on TV, they’re mostly about California. So, that’s the kind of transition I went from – in the place where everything is talked about to the place where everything is joked about.

• What are some things about Oklahoma that have stuck out to you so far?

• In Idaho, were you closer to the desert region or the mountain areas?

I was in a place where it was desert, but I could be in the mountains within a half hour.

• Are you much of a mountain guy?

I love going to the mountains; I’m the outdoors type. Oklahoma has been a great place for outdoorsmen, but it’s just a little bit different. You don’t really have mountains out here, it’s more hills. And the rivers are full of bass instead of trout and salmon. But other than that, it’s pretty much the same thing. And it’s close too, like I like – it’s not far to get to the river or somewhere to go camping.