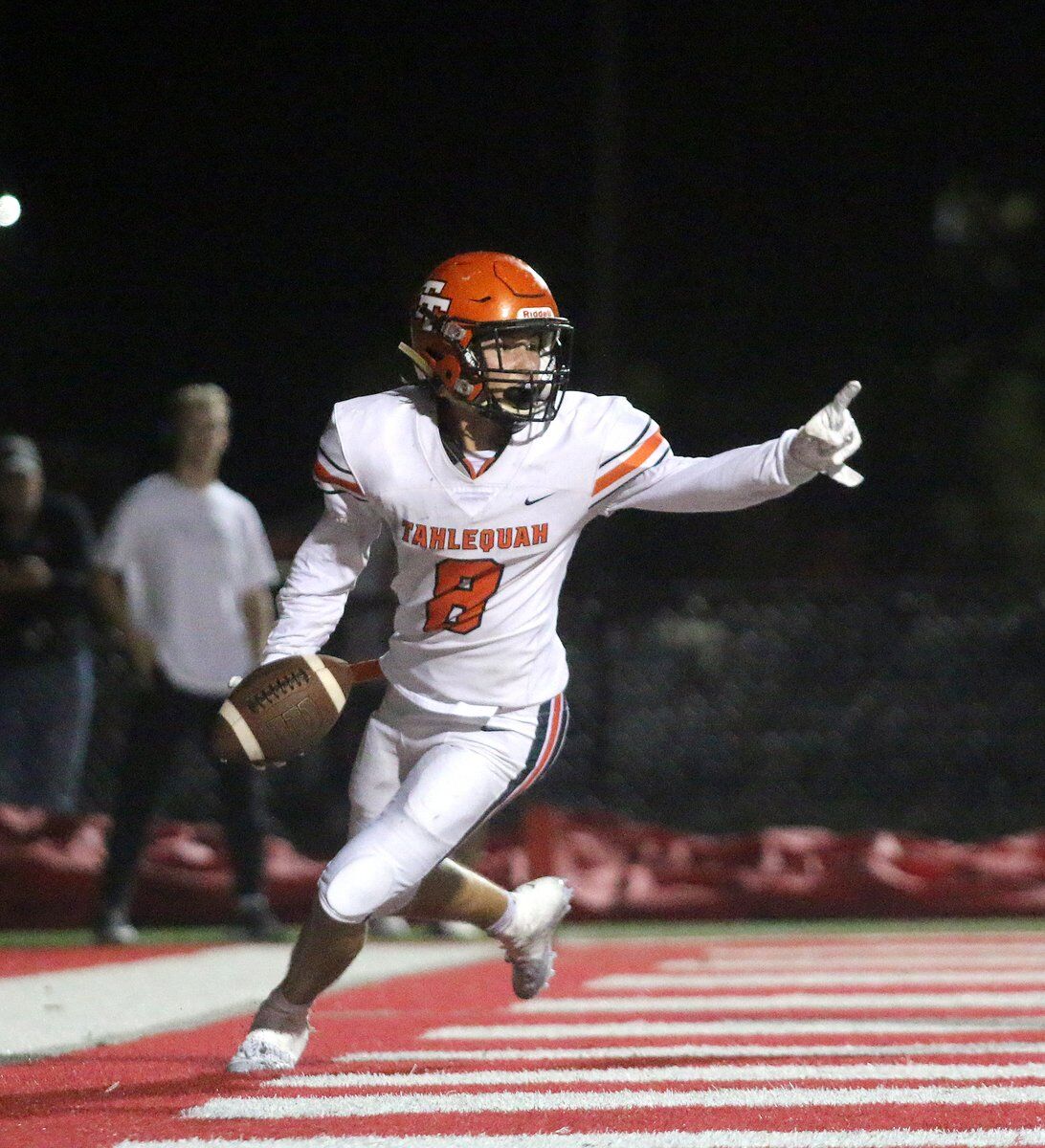 Tahlequah sophomore receiver Race Stopp gets into the end zone on an 11-yard reception during the fourth quarter Thursday at Lantow Field in Claremore. 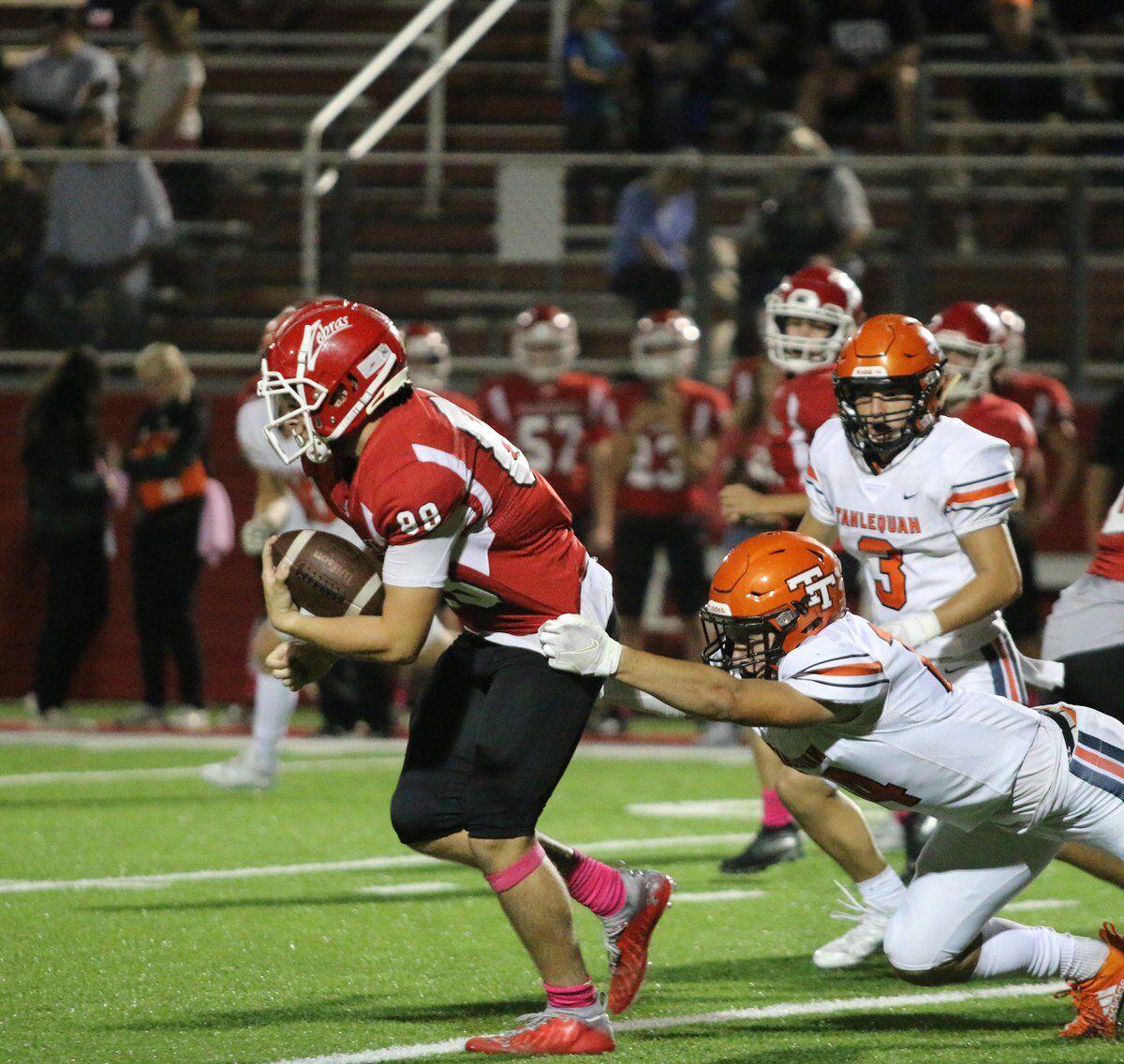 Tahlequah's Brayden Northington tries to bring down Claremore's Micah Teel during the first half Thursday at Lantow Field in Claremore.

Tahlequah sophomore receiver Race Stopp gets into the end zone on an 11-yard reception during the fourth quarter Thursday at Lantow Field in Claremore.

Tahlequah's Brayden Northington tries to bring down Claremore's Micah Teel during the first half Thursday at Lantow Field in Claremore.

CLAREMORE -- Tahlequah came from behind in the second half for a second straight week and defeated Claremore, 21-14, Thursday at Lantow Field in Claremore.

Tahlequah, who started fast and took a 13-0 lead with 5:32 remaining in the second quarter, won their third straight game, and it comes after a dramatic 21-14 win over Sapulpa last week at Doc Wadley Stadium. The Tigers improved to 5-2 overall and 3-1 in District 5A-4.

Defensive back Dylan Leep helped secure the win by picking off Claremore quarterback Braxton Etheridge with 4:52 remaining. The Tahlequah offense then held the ball the remainder of the way behind three first downs.

"It just kind of fits the character of this football team," Tahlequah head coach Brad Gilbert said. "They battle every day. It's been a season of ups and downs when it comes to just the things we've went through. They don't flinch. They keep coming to work every single day and put their best foot forward. We keep finding ways to win football games."

The game-winning drive covered 61 yards in 12 plays. The biggest plays leading up to the score were an 11-yard run by Joice on third down, a Joice completion to Jacob Morrison for 13 yards, and a 9-yard run by Joice.

Joice, who threw for 179 yards with two touchdowns, started the scoring with a 30-yard TD pass to Morrison that ended the opening quarter. Joice also led the Tigers with 68 rushing yards on 15 carries.

Senior running back Malik McMurtrey gave Tahlequah a 13-0 advantage in the second quarter on a 10-yard scoring run. McMurtrey finished with 52 yards on the ground on 17 carries.

Claremore stormed back and took a 14-13 lead following an Etheridge 2-yard touchdown run and extra point at the 4:26 mark of the third quarter. Etheridge also had a 56-yard TD pass to Eli Rodgers with 4:24 remaining before halftime for the Zebras' first points.

Tahlequah closed with 279 total yards of offense and was 7 of 14 on third downs and 2 of 3 on fourth downs. Morrison had 61 yards receiving, and Stopp followed with 51 yards.

The Tahlequah defense forced two turnovers, the other coming on an interception by Coda Bunch, and allowed 223 total yards.

"Defensively, we kept making plays, kept getting the ball back to the offense," Gilbert said. "Offensively, we had drives, it was just one of those things where those penalties crept up and got us again, and bad snaps on the first drive. Earlier in the year we weren't overcoming those throughout the course of the game. Tonight, we did."

The Zebras, who fell to 1-6 and 1-3, were paced offensively by Rodgers, who had 95 receiving yards on six receptions. Etheridge threw for 130 yards, and Titus Ashby led the Claremore ground game with 43 yards on nine carries.

"It's never easy to beat a Claremore team. It never is, never will be," Gilbert said. "It's always tough. We play them close it seems like every year.

"I'm proud of these young men. They represent our community the way that we're supposed to represent it. We have kind of a blue collar fight mentality, and they're not flinching for anything."