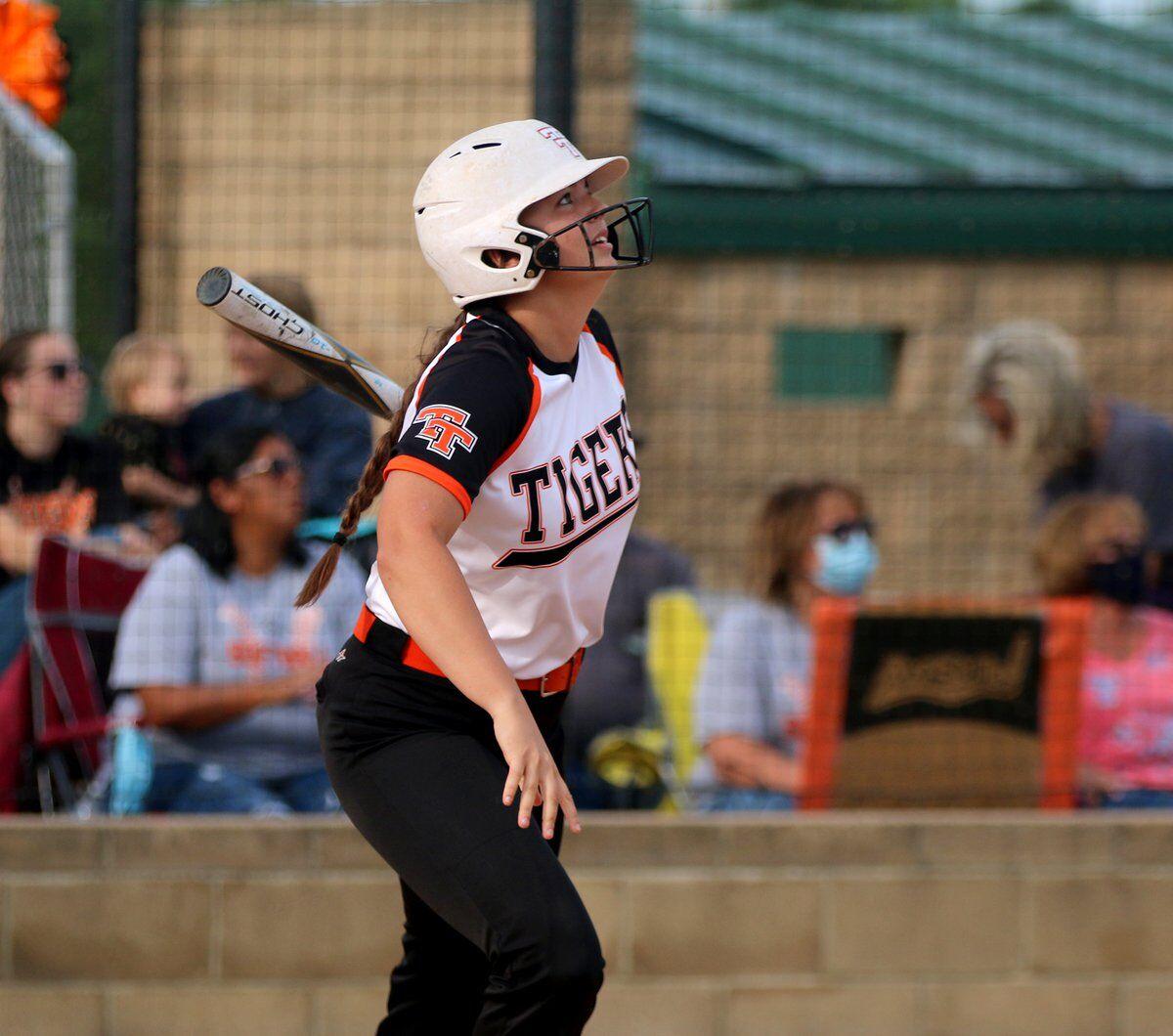 Tahlequah junior Hailey Enlow watches as she hits a flyball during the first inning Monday against Glenpool. 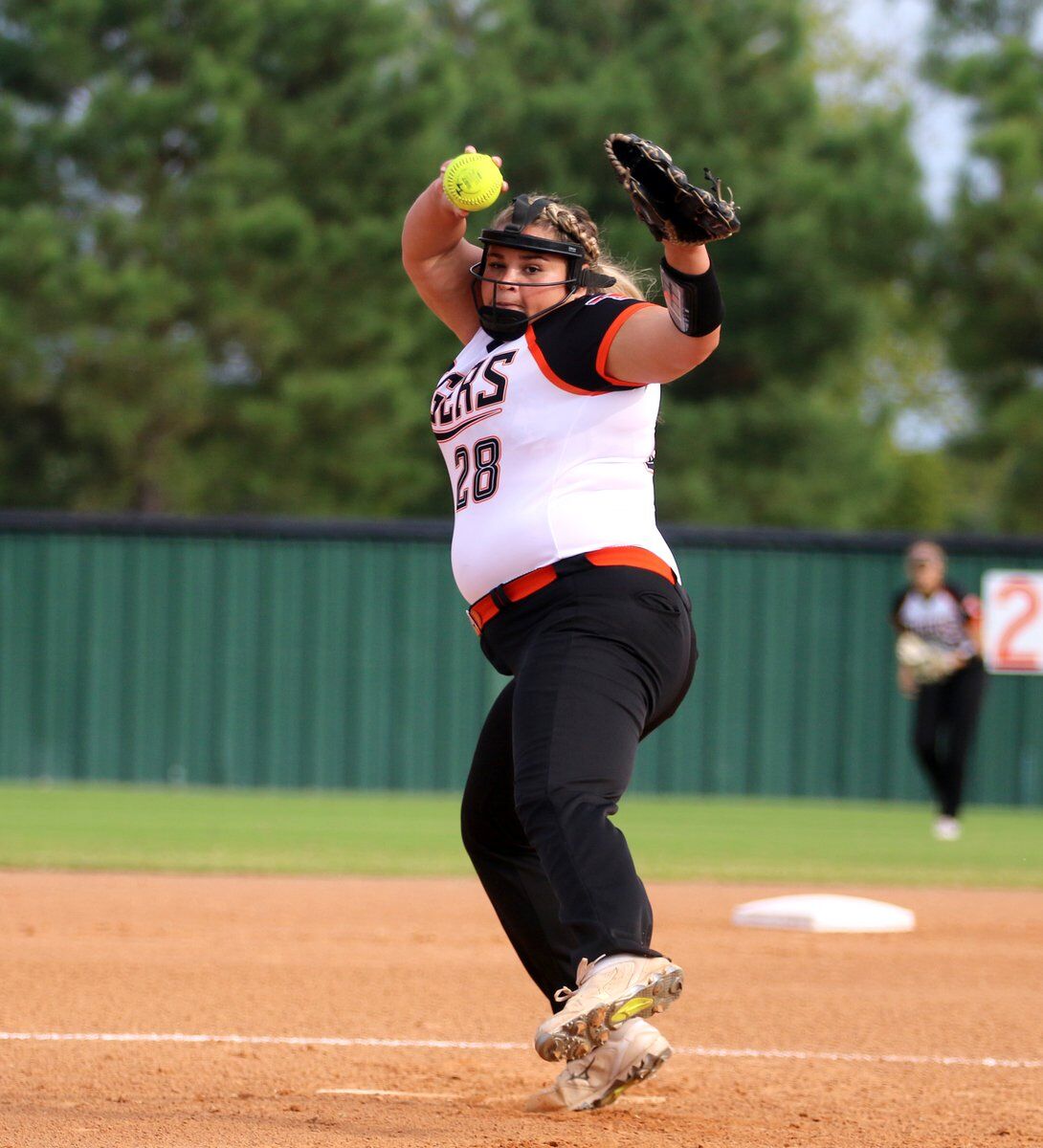 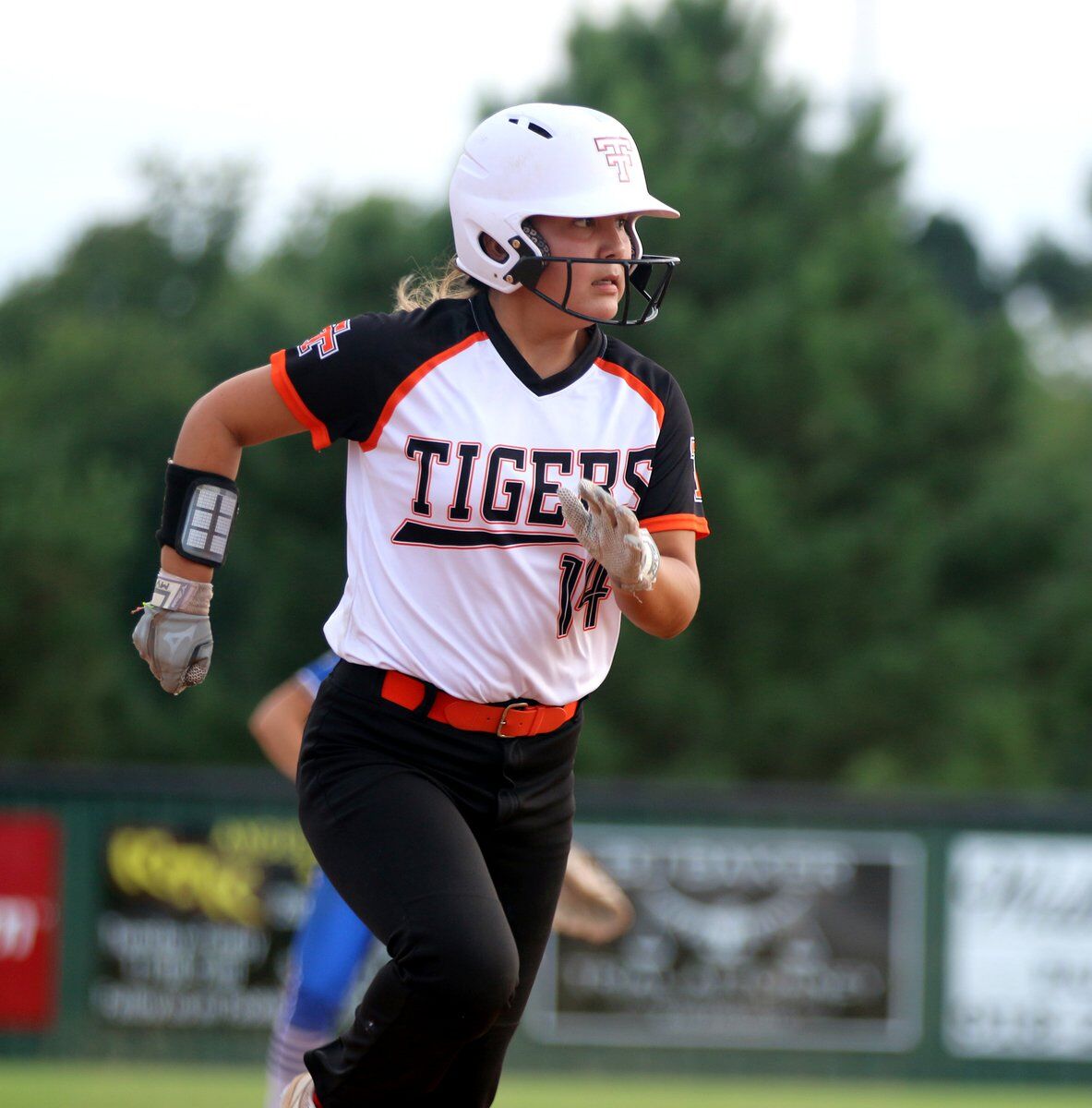 Tahlequah's Mikah Vann runs to third base Monday against Glenpool. The Lady Tigers suffered a 4-2 loss in eight innings.

Tahlequah junior Hailey Enlow watches as she hits a flyball during the first inning Monday against Glenpool.

Tahlequah's Mikah Vann runs to third base Monday against Glenpool. The Lady Tigers suffered a 4-2 loss in eight innings.

Glenpool pushed across three runs in the eighth inning to top Tahlequah, 4-2, in extra innings and spoil the Lady Tigers’ senior night on Monday.

The loss is the first in District 5A-4 for Tahlequah, who slips to 6-1. The Lady Tigers, who also had their five-game win streak snapped, fall to 10-7 overall under head coach Chris Ray.

The Lady Warriors improve to 7-8 overall and 4-2 in district play. The Lady Tigers had no problems with Glenpool in the first matchup on Aug. 18 when they defeated the Lady Warriors, 15-3.

On Monday, Tahlequah had several opportunities to score more runs but couldn’t cash in.

In the eighth, Mia Allen and Hailey Enlow were left stranded in scoring position after Charlea Cochran ground out to end the contest.

In the seventh, Jayley Ray, who led the Lady Tigers with two hits, singled to center field and advanced to second base on a Paisley Qualls’ groundout but was left stranded after Jersey Retzloff grounded out.

The Lady Tigers also left runners in scoring position in the first, fourth and sixth innings and left six runners on base overall.

“This game shouldn’t have ever went to the eighth,” Ray said. “We left way too many runners in scoring position. We didn’t adjust at the plate. That girl [Glenpool pitcher] lived away the whole night. Give them credit. They did a good job. They made plays when they needed to. We were just too bad at the plate to win this ball game.”

The Lady Tigers took a 1-0 lead in the fifth when Qualls crossed home plate on an error. They added their final run in the eighth when Enlow got aboard on an error, allowing Mikah Vann to score.

Bailey Jones, Tahlequah’s lone senior, kept her team in the contest throughout, but the Lady Tigers committed a pair of costly errors in the eighth. Jones had an errant throw to first base, and Ray had a miscue that allowed Glenpool to go up 3-1.

Jones went the distance, allowing one earned run on five hits. She recorded six strikeouts and issued just one walk.

Tahlequah, who finished with five hits as a team, also received a single apiece from Lexi Hannah, Vann and Allen.

“I just thought we came out a little bit lethargic,” Ray said. “If we make the play on the slapper in the eighth, they don’t score in that inning and who knows what happens right there. It is what it is. I give [Glenpool] all the credit. They hit it a lot better than we did, and they were ready to play and we weren’t.”

Tahlequah will try to bounce back on Tuesday when it hosts Durant in a 5 p.m. start. The Lady Lions are 10-5 overall and 5-1 in 5A-4. Ada is now the only unbeaten team remaining at 5-0.

“Tomorrow’s huge, it’s really huge,” Ray said of Tuesday’s matchup with Durant. “Now our back is up against the wall. We’ll drop down in a tie with Durant.”