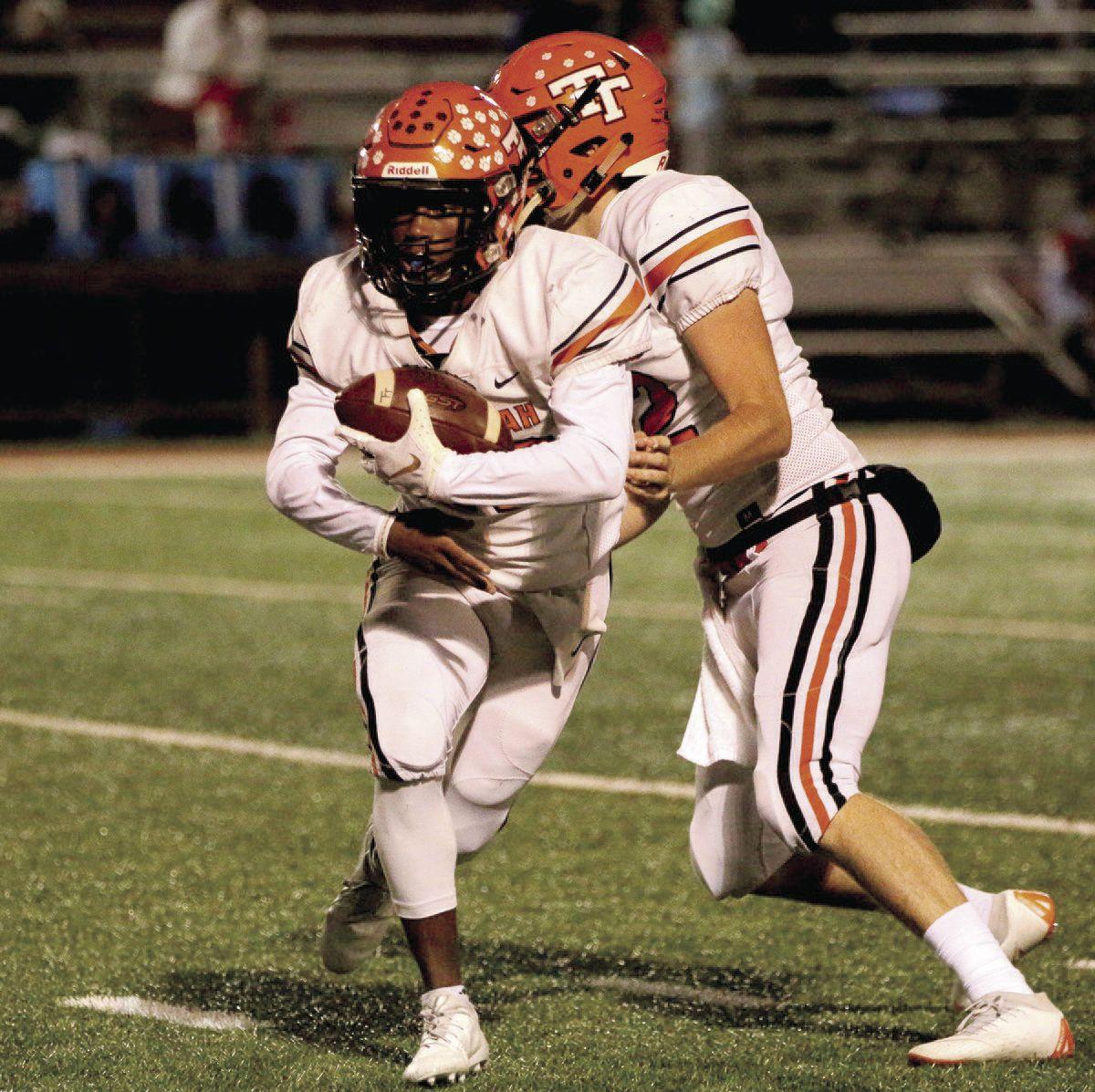 Dae Dae Leathers rushed for a game-high 204 yards and had two touchdowns against Collinsville Friday at Sallee Field in Collinsville. 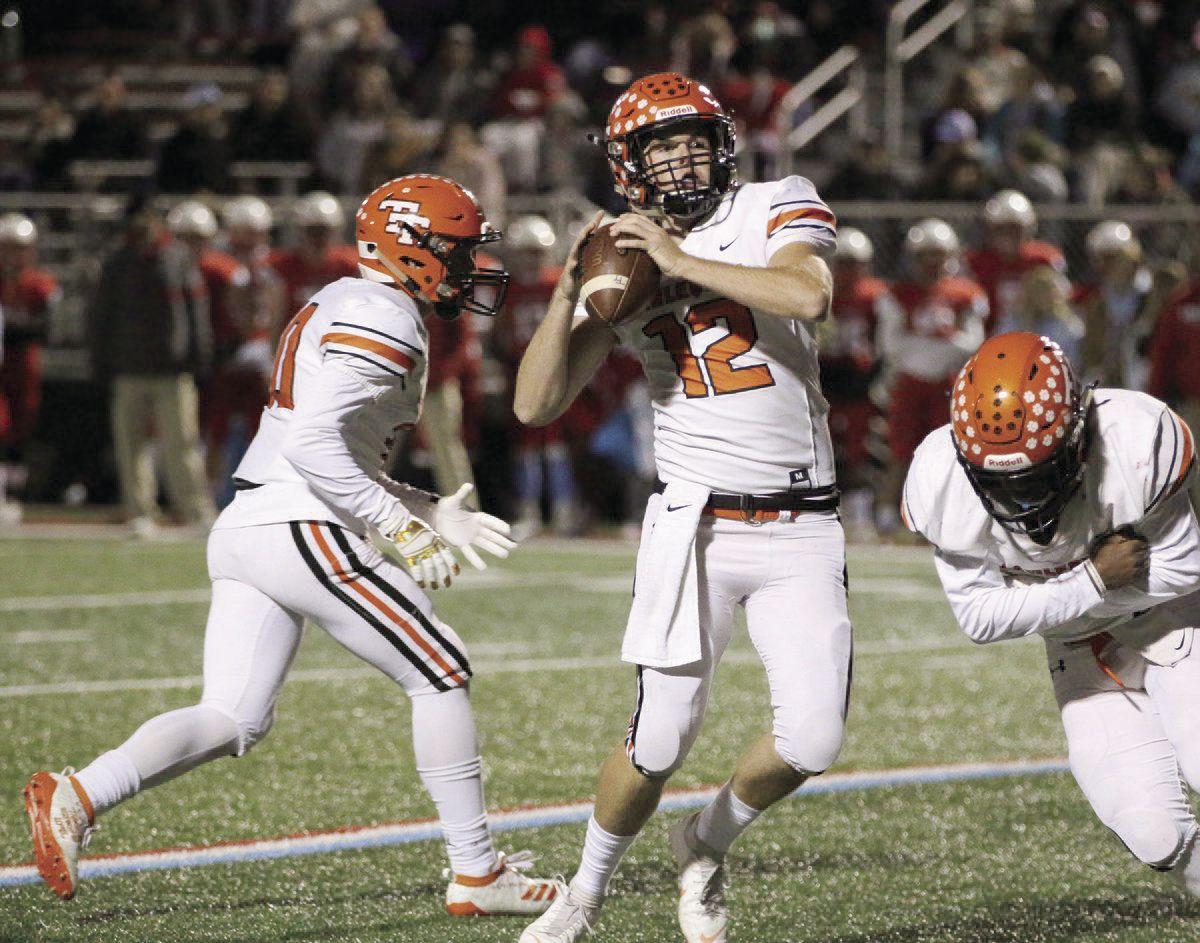 Tahlequah quarterback Tate Christian looks for an open receiver during the first half Friday against Collinsville. Christian had three touchdown passes in the Tigers' 35-28 overtime win. 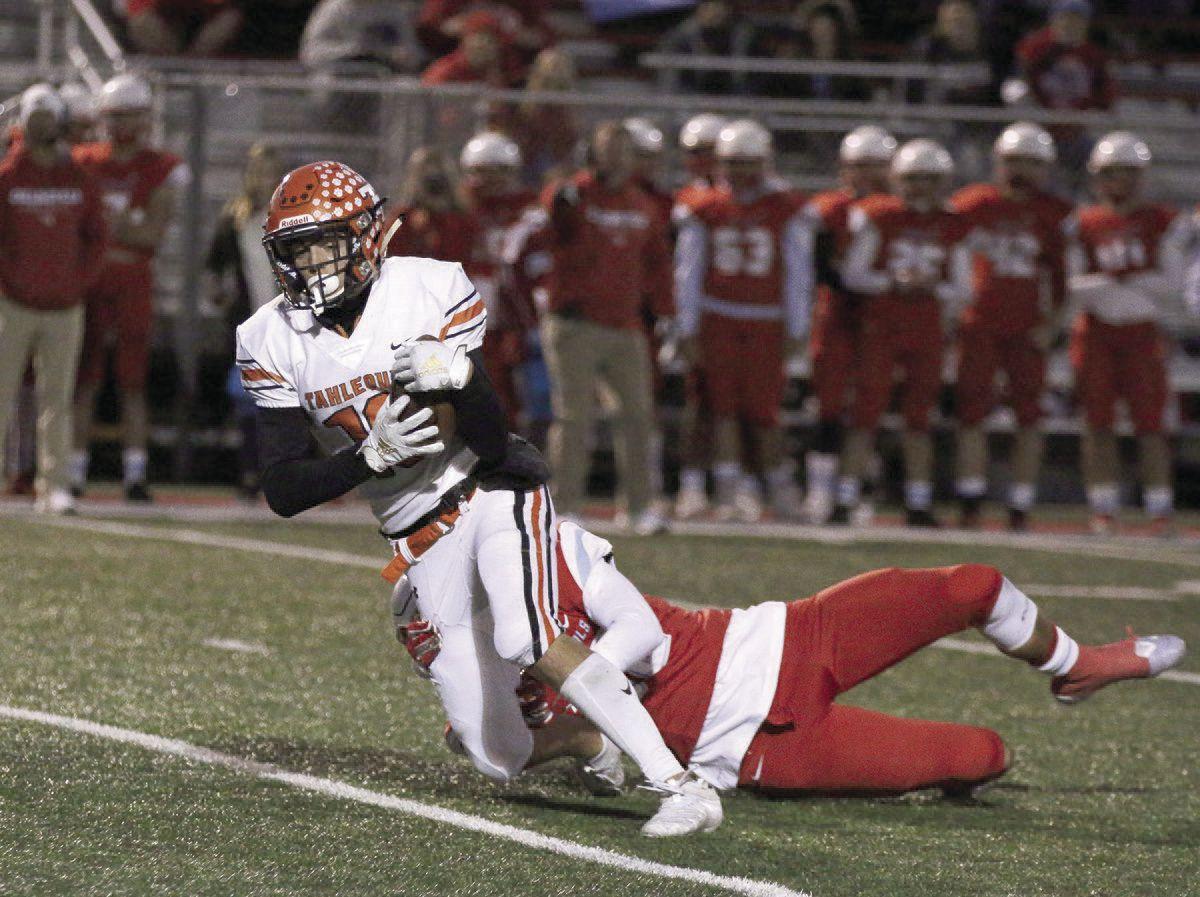 Tahlequah receiver Tristan King is brought down by a Collinsville defender after making a catch in the first half against Collinsville Friday.

Dae Dae Leathers rushed for a game-high 204 yards and had two touchdowns against Collinsville Friday at Sallee Field in Collinsville.

Tahlequah quarterback Tate Christian looks for an open receiver during the first half Friday against Collinsville. Christian had three touchdown passes in the Tigers' 35-28 overtime win.

Tahlequah receiver Tristan King is brought down by a Collinsville defender after making a catch in the first half against Collinsville Friday.

COLLINSVILLE — Tahlequah kept its stronghold on Class 5A with an epic 35-28 overtime win over Collinsville Friday night at Sallee Field in Collinsville.

The No. 3 Tigers, the only unbeaten team remaining in 5A, got a late 10-yard touchdown pass from senior quarterback Tate Christian to receiver Simeon Armstrong with 24 seconds left to tie the game at 28-28, and Christian added a six-yard scoring strike to Tristan King in overtime for the deciding points against the sixth-ranked Cardinals.

“We continued to battle back,” Tahlequah head coach Brad Gilbert said. “The second half, [Collinsville] came out and took the lead and we would always answer offensively, and we finish it in overtime. It was a great win, great team win, and it’s a great program win. Anytime you can come up here and beat Collinsville, you’ve earned it.”

“I couldn’t be more proud of these seniors and the leadership they have demonstrated, not only tonight, but throughout the course of the season up to this point,” Gilbert added. “They deserve this, they’ve earned this, and that’s what we talk about, is you earn everything in life and I promise you this is an example of it right here.”

The Tigers’ defense finished it off when it pressured Cardinals’ quarterback Kolten Allphin and forced an incomplete pass on fourth down from the 6-yard line.

“The defense made a great stand right there and in the first half they really kept us in the game,” Gilbert said.

Tahlequah moves to 6-0 overall and 3-0 in District 5A-4, while Collinsville slips to 4-2 and 2-1. The Tigers will be in another top 10 battle next week when they visit No. 9 Pryor on Thursday.

Christian’s TD pass to send the gave into overtime capped a 69-yard scoring drive after the Cardinals had a 9-yard touchdown run from Allphin with 6:31 remaining.

“It starts in summer workouts,” said Christian, who also directed a late-scoring drive that took down Skiatook last week. “Coaches know what we’re going to go through in the season and there’s enough of them on the staff that’s been there forever. Coach [Gary] McClure and my dad [Brandon Christian] were on the team that won the last district championship, and that’s what we’ve been talking about the past couple of weeks is going out to get that. It hasn’t happened since 1991 here, so that’s just something that we’ve been pushing for. We just want to make something out of this.”

“He responded the right way, and that’s what we talk about all the time. When adversity comes you’ve got respond the right way. That’s leadership,” said Gilbert, who was emotional when asked about Christian.

Christain, who completed 13 of 23 passes for 131 yards with three touchdowns, got a ton of help from standout running back Dae Dae Leathers, who entered the game with 756 yards and nine touchdowns.

Leathers sparkled behind a dominant offensive line and rushed for a game-high 204 yards on 33 carries with a pair of TDs. Leathers had the game’s only points in the first half, a two-yard touchdown run.

“In the second half that offensive line did a great job and Dae Dae stayed patient and allowed things to develop,” Gilbert said. “We were able to pick up chunks of yards.”

Leathers’ second touchdown run came from five yards out that tied the game at 21-21 with 11:26 remaining.

Collinsville got its first points to start the second half when Hunter Smith returned the opening kickoff 86 yards for a touchdown, making it 7-7.

Tahlequah answered right back and retook the lead at 14-7 on Christian’s first touchdown pass, a six-yard toss to King.

The Cardinals then took advantage of Christian’s interception and got a 35-yard TD run by Jeran Seabolt at the 4:12 mark of the third quarter to even the score again at 14-14.

Collinsville took its first lead (21-14) on an Allphin 10-yard touchdown run at the close of the third quarter.

Tahlequah finished with 399 total yards of offense. Jaxon Jones had a team-high 57 receiving yards on five receptions. Collinsville closed with 195 total yards and were led by Allphin’s 80 rushing yards and two touchdowns.