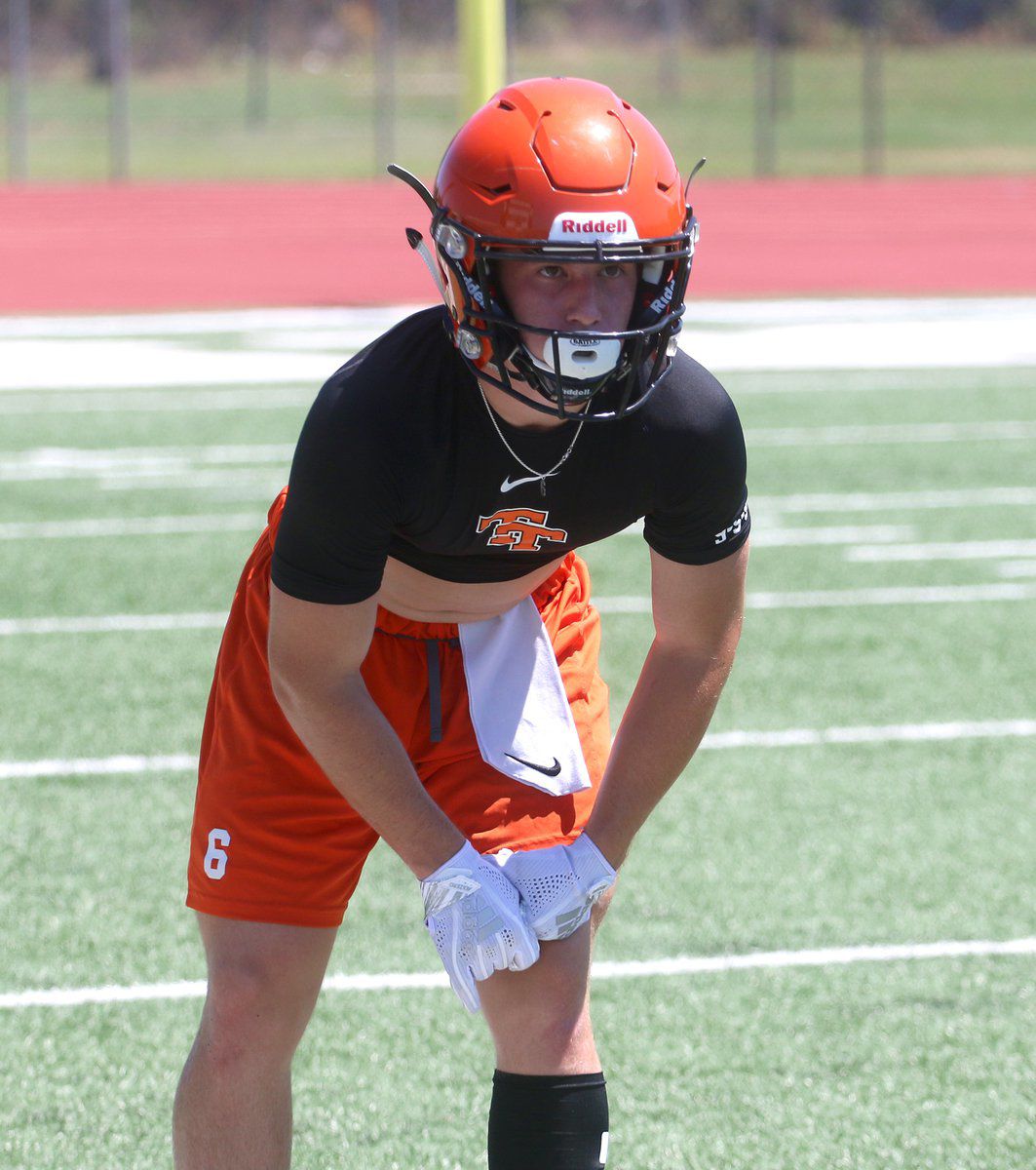 Tahlequah junior defensive back Bradley Pruitt expects to play a big part in the Tigers' secondary in 2019. 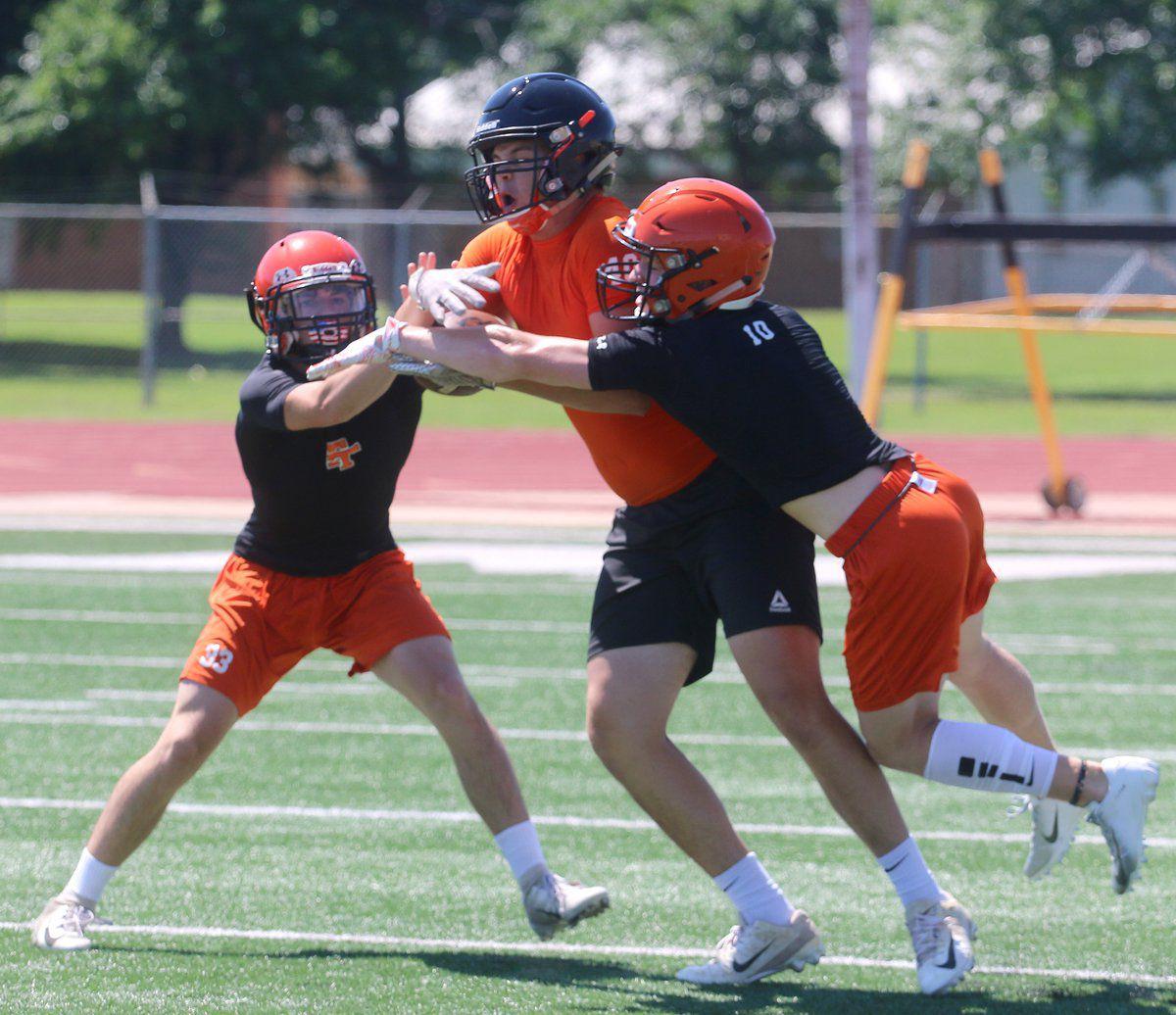 Junior safety Kobey Baker (right) and sophomore linebacker Jeric Hodge try to break up a pass play against a Sallisaw receiver at the Muskogee Passing League on Thursday, June 20 at Indian Bowl.

Tahlequah junior defensive back Bradley Pruitt expects to play a big part in the Tigers' secondary in 2019.

Junior safety Kobey Baker (right) and sophomore linebacker Jeric Hodge try to break up a pass play against a Sallisaw receiver at the Muskogee Passing League on Thursday, June 20 at Indian Bowl.

The Tahlequah secondary is the deepest position group on the defensive side of the ball going into the 2019 season.

The Tigers return three starters with the lone exception being cornerback Colton Booth.

Although they have standouts in the front seven in defensive end Blake Corn and linebacker Dylan Parish, the Tigers have more overall experience and depth on the back end.

Baker started all 11 games at strong safety in 2018 as a sophomore. He’s a sure tackler and solid in coverage. He was third on the team with 71 tackles.

“I think you start first with Kobey Baker, who started all 11 games last year at strong safety,” head coach Brad Gilbert said. “There’s a lot of production there with him and I think he’s had a great offseason.

“He’s gotten faster. He was a part of the track program, lives in the weight room and is extremely athletic. He’s one of our better athletes. From week one to week 11 last year he understood that strong safety position so much more. I think you’re going to see that even more so this year. He’s just more comfortable, more confident. He understands the schemes better.

“He’s a high production guy. He’s going to make a lot of tackles, we’re going to ask him to cover in man coverage a lot. He’s that type of guy.”

Qua’shon Leathers started in the final three games at free safety as a sophomore and didn’t disappoint. He had a pair of interceptions, two pass breakups and collected 35 tackles.

“The next guy I jump to is Qua’shon Leathers at free safety,” Gilbert said. “He ended up starting the last three games for us last year. He didn’t play much early but as the season went along he got better and better and he ended up putting him out there and he really produced at a high level for a guy that was thrown in the fire.

“He’s very athletic, very smart. He understands the role of a free safety, tracking the football and reading the quarterback’s eyes. He’s got a great ability to break on the football and he’s a physical.”

Patrick is the other returning starter at one of the cornerback spots. As a junior, Patrick had two interceptions, was tied for team-high honors in pass breakups and had 22 tackles.

“He got better and better as the year went on,” Gilbert said. “He had some rough outings there at the beginning and he’ll tell you that, but he continued to work and he was coachable which allowed him to progress as a corner. He made a lot of plays for us as the season went on. We’re excited about his overall abilities.”

The other corner spot will be filling Booth’s vacancy, and there’s plenty of options for Gilbert.

Pruitt will be a junior, and Riley Reed, Nelijah Tatum, Malik McMurtrey, Armstrong and Leathers are others that he touched on.

“We’ve got a bunch of other guys working at corner,” Gilbert said. “They all have their own strengths and they all have their own weaknesses. It’s just finding the right combination of guys back there. We know it won’t be just one guy. You’re going to see probably two to three guys playing the corner position for us throughout the course of the year, if not four of them. We want them to compete every day and we want to continue to improve and we believe the only way you can improve is to compete.”