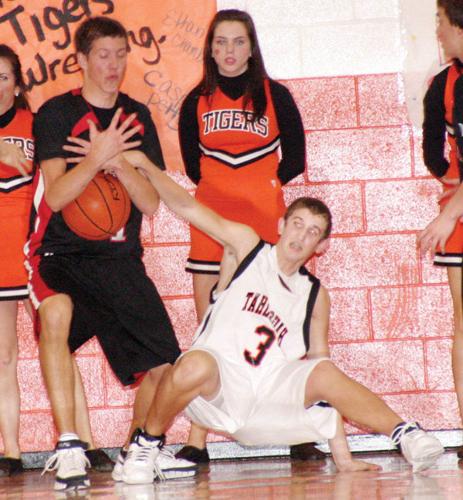 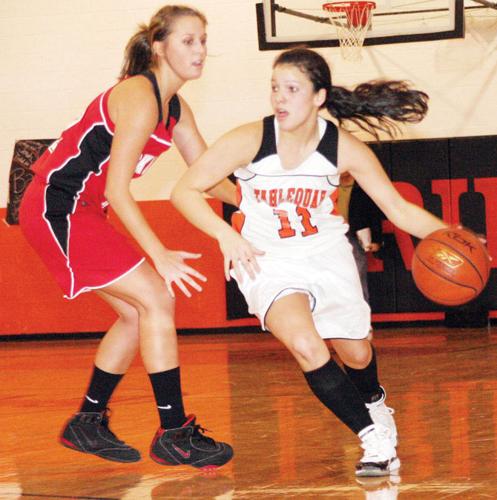 The Tahlequah High School boys' and girls' basketball teams both showed what they could do in a tight game as both were forced to battle with Skiatook on Tuesday night at Tahlequah High School. While both team's coaches feel they have more work to do, it was the boys' basketball team that got the upper hand as the Tigers beat the Bulldogs, 66-64 to earn their first win of the season. Meanwhile, the girls' team wasn't as fortunate as the Lady Tigers fell by the same two-point margin, 51-49. The Tigers opened up double digit leads twice in the game, a 12-point lead in the first half and a 10-point lead in the second half, however both were whittled down by the Bulldogs. But the Tigers were able to hang on at the end. "We're all stressed out, but we're happy," THS boys' coach Leroy Qualls said. "It was a tough game. We probably made some poor decisions down the stretch." The key moment of the game came with the Tigers were tied with Skiatook at 37 with 3:49 to go. Skiatook wouldn't score again until with 17 seconds left in the quarter as Tahlequah went on a 10-0 run. That appeared to put the game away. "We were just kind of letting them hang around and then we switched defenses and started pressuring the ball a little," Qualls said. "The guys responded and came up with some steals and got some open layups." Tahlequah ended the third quarter with a 49-39 lead. However, Skiatook had one more run in it as the Bulldogs got to within three points, 55-52 on a basket by Chase Eastman with 3:04 to go. However, that was the closest Skiatook got until the closing seconds. The Tigers were able to stretch the lead back out to five points, 63-58 when Brandon Espinal hit a deuce with 33 seconds remaining. Skiatook's Jacob Gaul it a 3-pointer with three seconds left in the game to get Skiatook to within two at 66-64, but were unable to get a foul in time to stop the clock as time ran out. The Tigers started out strong in the game as Tahlequah jumped out to and 22-12 at the end of the first quarter and stretched that lead to as high as 12, 28-16 with 6:06 remaining in the second quarter. Skiatook, however, cut that lead down to four by halftime as Tahlequah led 35-31. Matt Qualls and John Griggs both led the Tigers in scoring. Qualls had 23 points while Griggs came up with 17. Espinal came in next with eight. The Girls' team faced a similar set of circumstances as the Lady Tigers started out strong with a 14-2 lead in the first quarter, but only led by two at the end of the first quarter, 18-16. Still, the Lady Tigers never trailed until the 2:38 mark of the third quarter, however they were never able to regain the lead again as foul trouble plagued Tahlequah. "Foul trouble was a big problem," THS girls' coach Mindy Moseley said. "We had Katie [Atkins] with three and Shelbi [Bowin] with three, we just struggled." Atkins picked up her third foul in the second quarter, forcing Moseley to only play her sparingly in the third quarter. "That's what we told them in the lockerroom," Moseley said. "If Katie is on the bench, we struggle because she's not only a leader, she's one of our best scorers." Still the Lady Tigers had a chance to win or force overtime as, trailing 51-49, Bowin had a shot inside the paint with two seconds to go, but it bounced off. Bowin had her best game of the season this far, leading all scorers with 24 points. "I had no more timeouts and the rule was Katie or Shelbi take the shot and they did," Moseley said. "We shouldn't have been in that spot in the first place." The Lady Tigers held a 32-24 halftime lead. Tahlequah tied the score at 49 with 46 seconds to go on a jumper by Christina Kirk, but Skiatook took the lead back for good on a shot with 10 seconds left. Both teams will next play on Friday at Bixby.