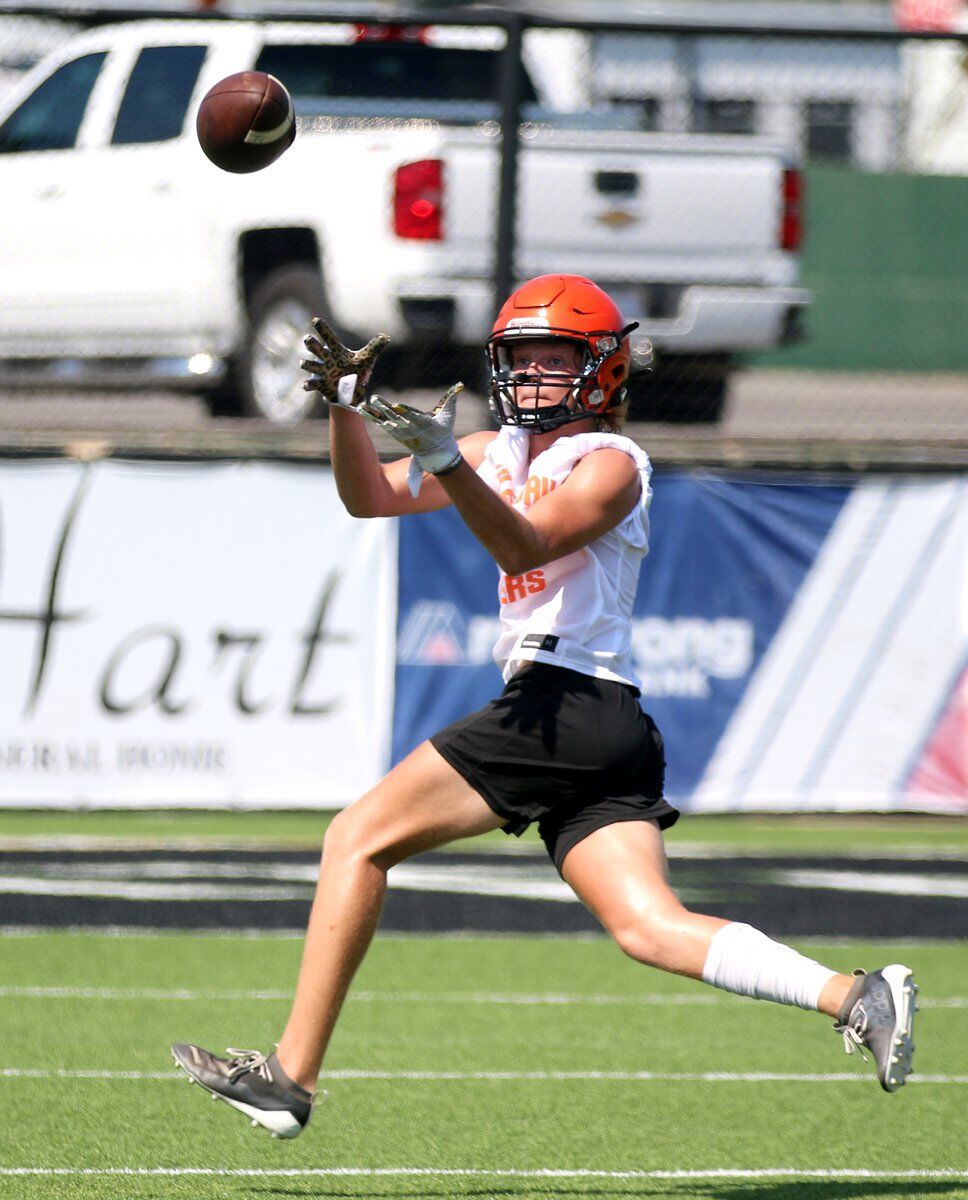 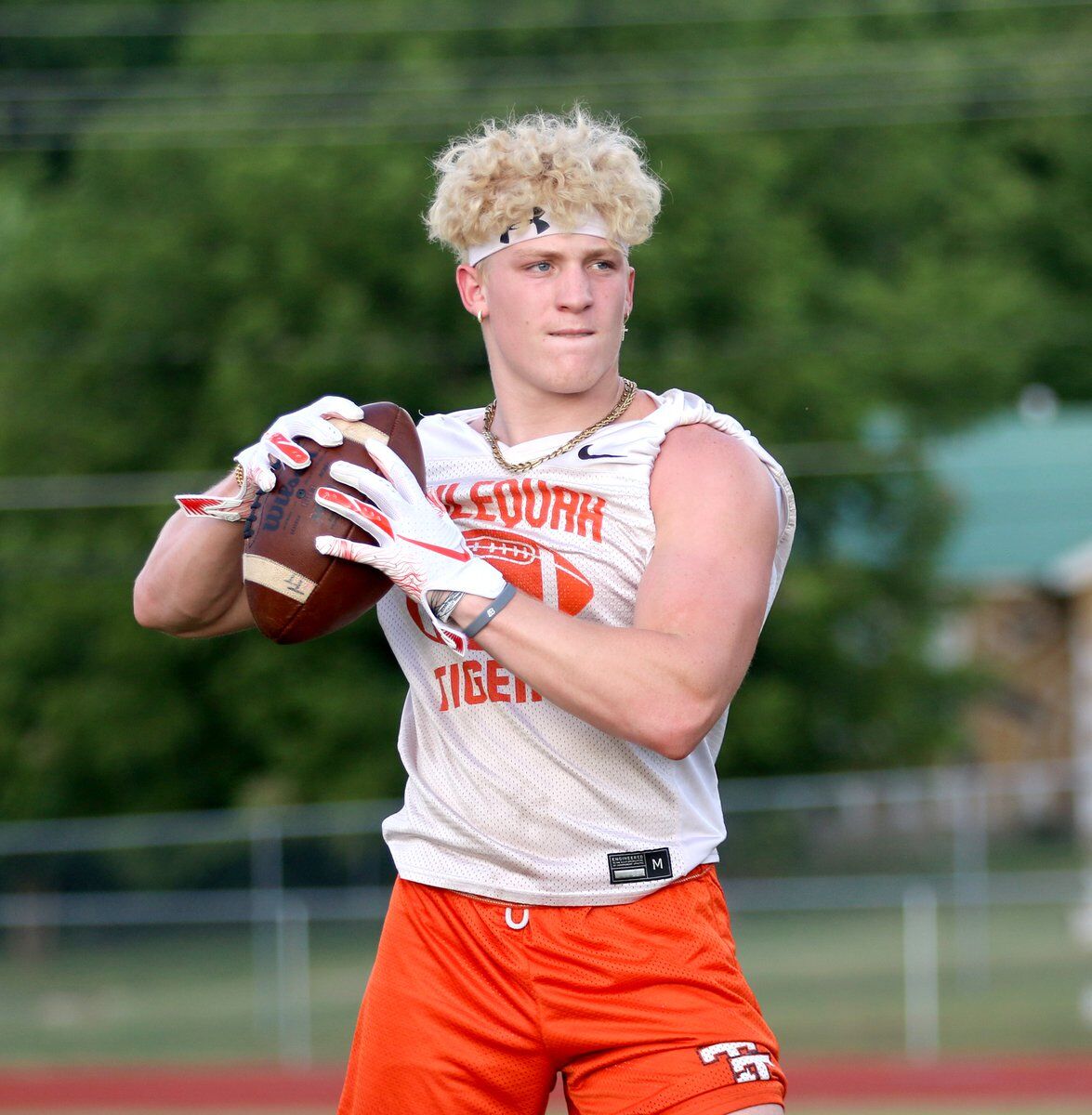 Tahlequah senior Kobey Baker led the Tigers with 29 catches and had 333 yards with a two scores in 2019.

Tahlequah senior Kobey Baker led the Tigers with 29 catches and had 333 yards with a two scores in 2019.

Tahlequah will have a much different look when it takes the field in its season and home opener Friday against Tulsa McLain at Doc Wadley Stadium.

The Tigers, coming off a 9-2 season and a district championship, will have a number of new names at a number of positions after a heavy graduation loss.

Tahlequah head coach Brad Gilbert, although excited, knows there are drastic improvements that need to be made following a lackluster showing last Thursday in the final scrimmage at Hilldale.

“We’re still a young football team and there’s inexperience out there with a lot of guys being thrown in that are either first-time starters or are in a backup role. They’re getting a lot of reps, but they’re not quite ready. It’s our job as coaches to prepare them and get them as ready as we possibly can to be successful.”

More than anything, Gilbert is just delighted that there will be a football game on Friday after months of doubt surrounding the COVID-19 pandemic.

“Three months, two months ago I don’t know if we would’ve ever been here at this moment,” he said. “We’re here and we’re taking it one day at a time still. You never know what will happen.”

McLain already has a game under its belt, defeating Tulsa Central, 28-14, on Saturday, Aug. 29.

The Titans, led by its quarterback and running back, have a lot of athleticism, speed and size.

“They’re very athletic and are coming off a victory last week,” Gilbert said. “We know we’ve got our hands full. They’re so big and athletic. They’ve got a game under their belt, so they’re bringing some things into this game that we don’t obviously have.”

There’s a lot of unanswered questions for the Tigers.

Tahlequah will have new pieces at quarterback, at running back, at receiver, at two of the offensive line positions, an entirely new defensive front, at one linebacker spot, and both of its cornerback positions.

At receiver, the Tigers do return Baker, who led with 29 receptions and had 333 yards with two TDs as a junior. Others who will see time include senior Qua’shon Leathers, senior Tanner Christian, junior Jenks move-in Eli McWilliams, junior Parker Lane and sophomore Cale Matlock.

On the offensive line, three players return that got significant snaps last year, but Tahlequah must replace starters Kooper McAlvain, Hayden Napier, Blake Corn and Joe Hendrix. Tristan Walters and Justin Hitcock will be at the tackle positions, Lance Holcomb and Rocky Hensley at the guard spots, and Louis Hernandez at center.

Defensive ends Jonathan Davis and Jon Lyman, and nose guard Aiden Glynn are the projected starters on the defensive line. Others who will see time in a rotation include Hunter Clay, Walters, Clayton Wallace and Hernandez, among others.

The Tigers return linebackers Angel Quezada, Shaw Thornton and Carson Ferguson. Replacing standout Dylan Parish in the middle will be either Brett Bolin and McWilliams.

Tahlequah is solid at the safety positions with returning starters Leathers and Baker, but will be running out two new corners. Lane, Dylan Leap and McMurtrey will be the primary corners.

“We have to make sure that we don’t make the mistakes that prevent us from having the opportunities to be successful,” Gilbert said. “Turnovers and pre-snap penalties are always a concern in week one, especially with a young group. We’re going to control what we control. We need to be a disciplined football team and we need to play with a lot of energy.”