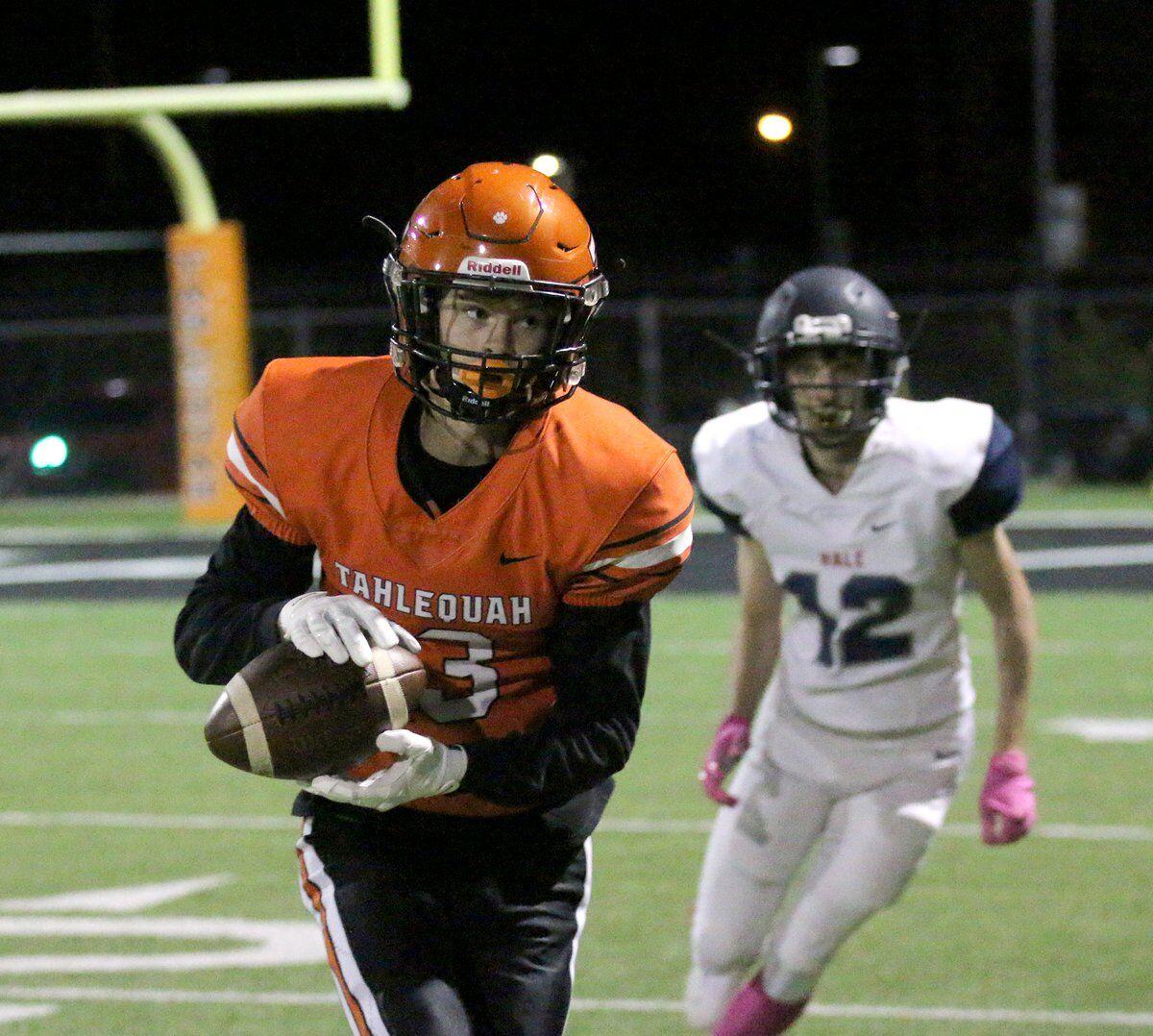 Tahlequah sophomore Cale Matlock was one of eight different receivers to have a reception in the Tigers' 72-0 win over Tula Hale last week at Doc Wadley Stadium. 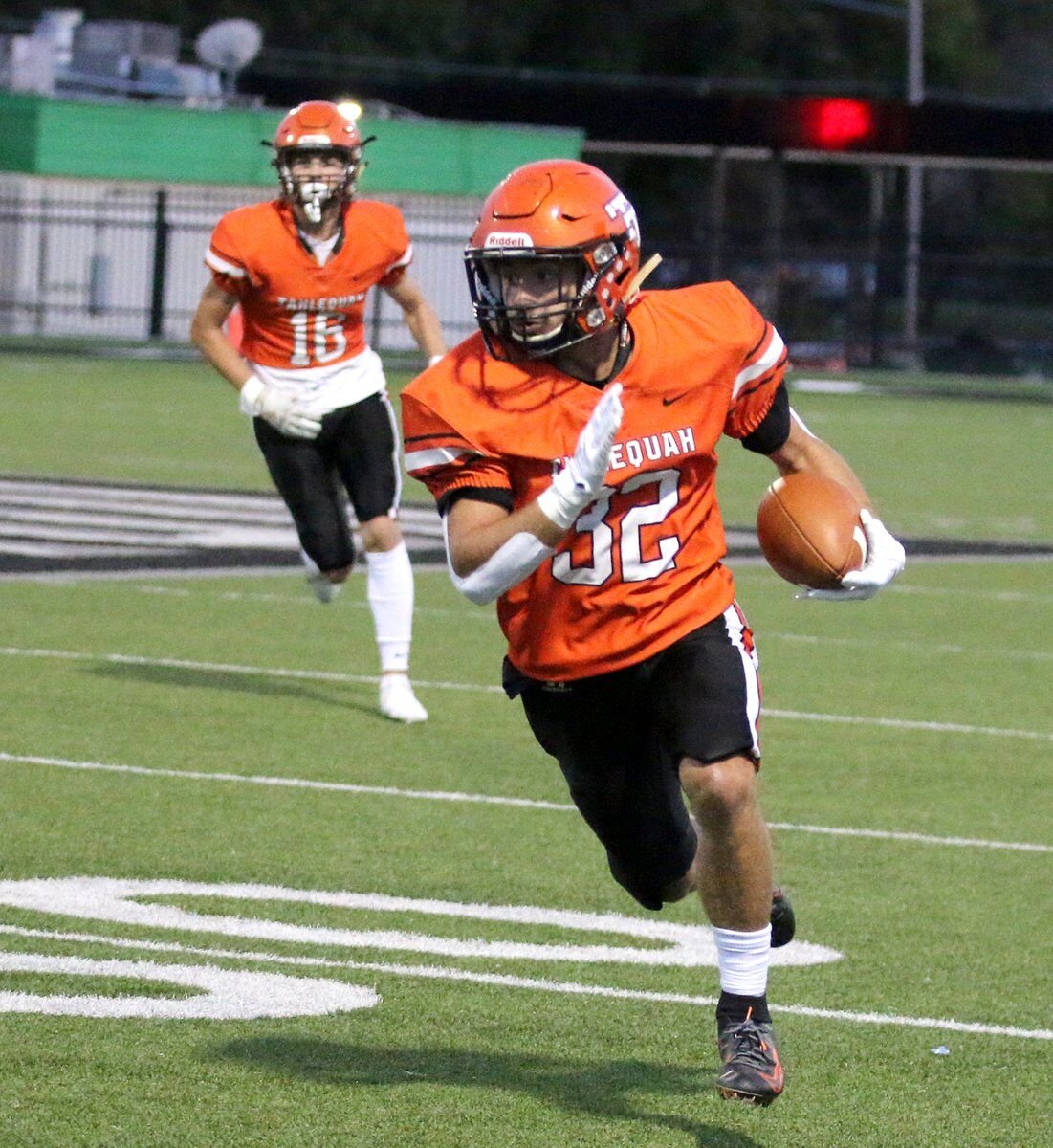 Tahlequah senior Carson Ferguson returns a punt 33 yards for a touchdown during the first quarter last week against Tulsa Hale.

Tahlequah sophomore Cale Matlock was one of eight different receivers to have a reception in the Tigers' 72-0 win over Tula Hale last week at Doc Wadley Stadium.

Tahlequah senior Carson Ferguson returns a punt 33 yards for a touchdown during the first quarter last week against Tulsa Hale.

Tahlequah will try to build off its best overall performance of the season when it goes back on the road and visits ninth-ranked Sapulpa Friday in a 7 p.m. kickoff.

The Tigers were spotless in their District 5A-4 opener — a 72-0 romp of Tulsa Nathan Hale last week on homecoming night at Doc Wadley Stadium.

The competition becomes stiffer with the Chieftains, who enter at 3-2 overall and 1-1 in district play. Sapulpa defeated Tulsa Memorial, 61-14, in its district opener and fell to No. 3 Collinsville, 42-17, last week.

“They’re very talented,” Tahlequah head coach Brad Gilbert said on Monday. “They have a lot of skill on both sides of the ball. They probably have the most athletic player we’ll play all year in their running back. There’s obviously some challenges, and they’re a really good football team. They were picked to finish second in our district.

“We’re excited about the challenge. We’ve got to make sure we eliminate all the distractions and take care of ourselves. In bigger games like this, you’ve got to be a disciplined and sound football team.”

Everything clicked for the Tigers against Hale, and a lot of players contributed.

Tahlequah did as it pleased offensively with a season-high 432 total yards, seven rushing touchdowns and a touchdown through the air. For the first time all season, the Tigers didn’t commit a turnover.

Defensively, the Tigers posted their second shutout of the season, limited the Rangers to 75 total yards, and forced a pair of turnovers.

“It was great to see our defensive toss a shutout, the special teams had two scores and did a lot of good things, and offensively we didn’t turn the ball over,” Gilbert said. “We didn’t hurt ourselves at all at any point and time in the game. We were pretty sound in all aspects, and that’s what you want to see. That means that our young men were ready to play and they were focused on what they were required to do.”

Running back Josh Munoz led all rushers with 106 yards and three touchdowns, and Malik McMurtrey, in his first game since the season opener, finished with 96 yards on only four carries with two scores.

Junior quarterback Tyler Joice had a 22-yard touchdown pass to Leathers and completed 3 of 4 passes for 36 yards. Backup Hunter Smith, who has been out with an injury, completed 4 of 6 passes for 40 yards. Eight different receivers had at least one reception.

Tahlequah’s defense is allowing just 155 total yards through four games. The Tigers have forced 10 turnovers. They forced Hale to punt six times and limited the Rangers to 1.6 yards per snap.

Sapulpa went 2-1 in its non-district games. The Chieftains fell to Sand Springs (21-17) in their season opener and followed with wins over Tulsa Edison (61-14) and Bartlesville (48-21).

The Chieftains are led offensively by running back Te’zohn Taft and quarterback Zac Mason. In the loss to Collinsville, Mason completed 22 of 33 passes for 333 yards, 244 of those in the first half, and had a 59-yard touchdown pass to Taft. Taft also rushed 19 yards for a TD.

“He’s a really explosive guy and very physical, too,” Gilbert said of Taft. “He plays the game as it should be. We know that’s going to be a big challenge, just slowing them down offensively. They’re able to do a lot of different things and they do a good job within their scheme of getting the guys the ball that need to have the ball. We’ve got to be aware of where [Taft] is but also some of their other guys that make plays. Obviously, our defense has got their work cut out for them.

“Defensively, they’re very physical. They’re very sound and you’re not going to see them out of position much.”