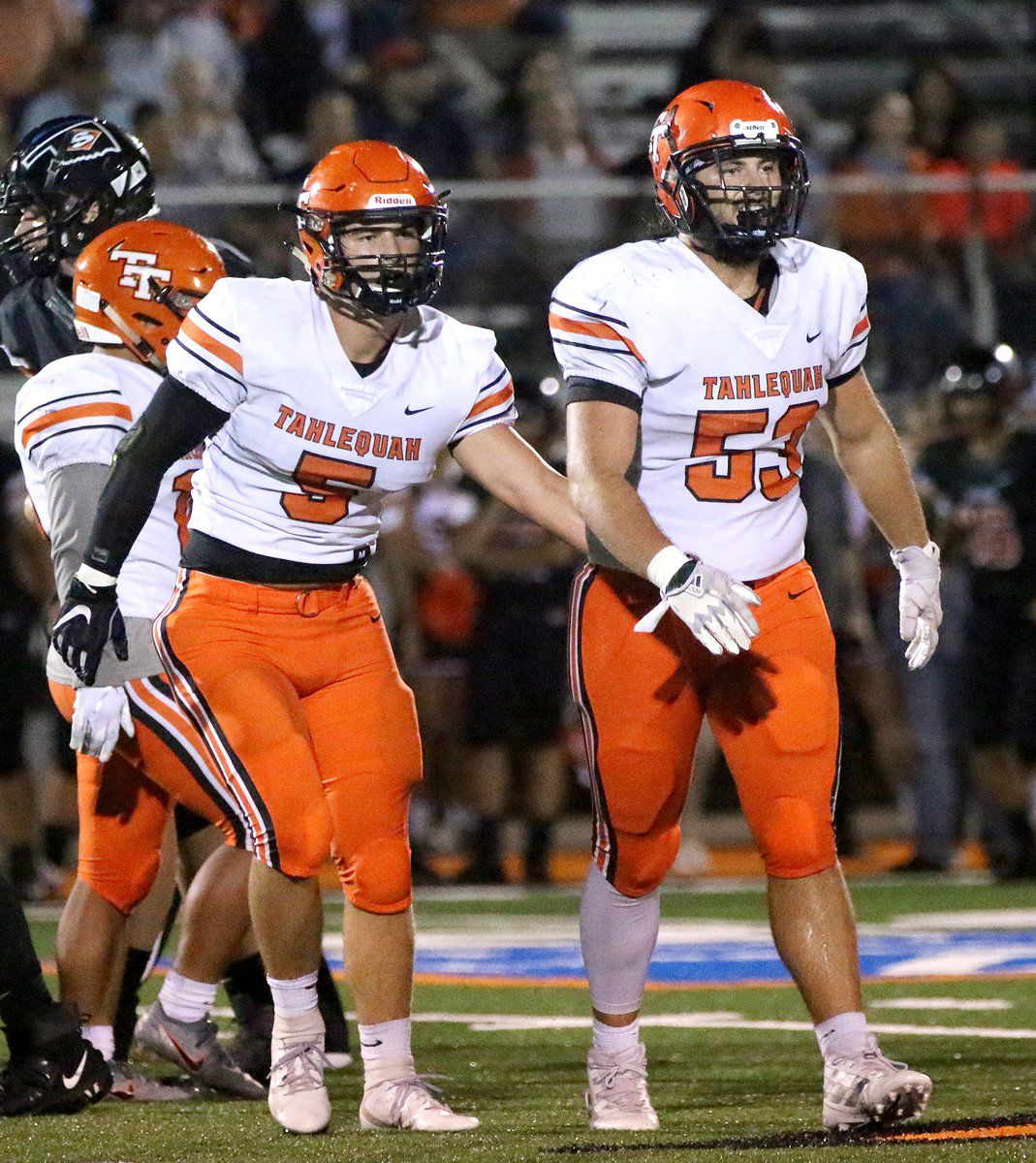 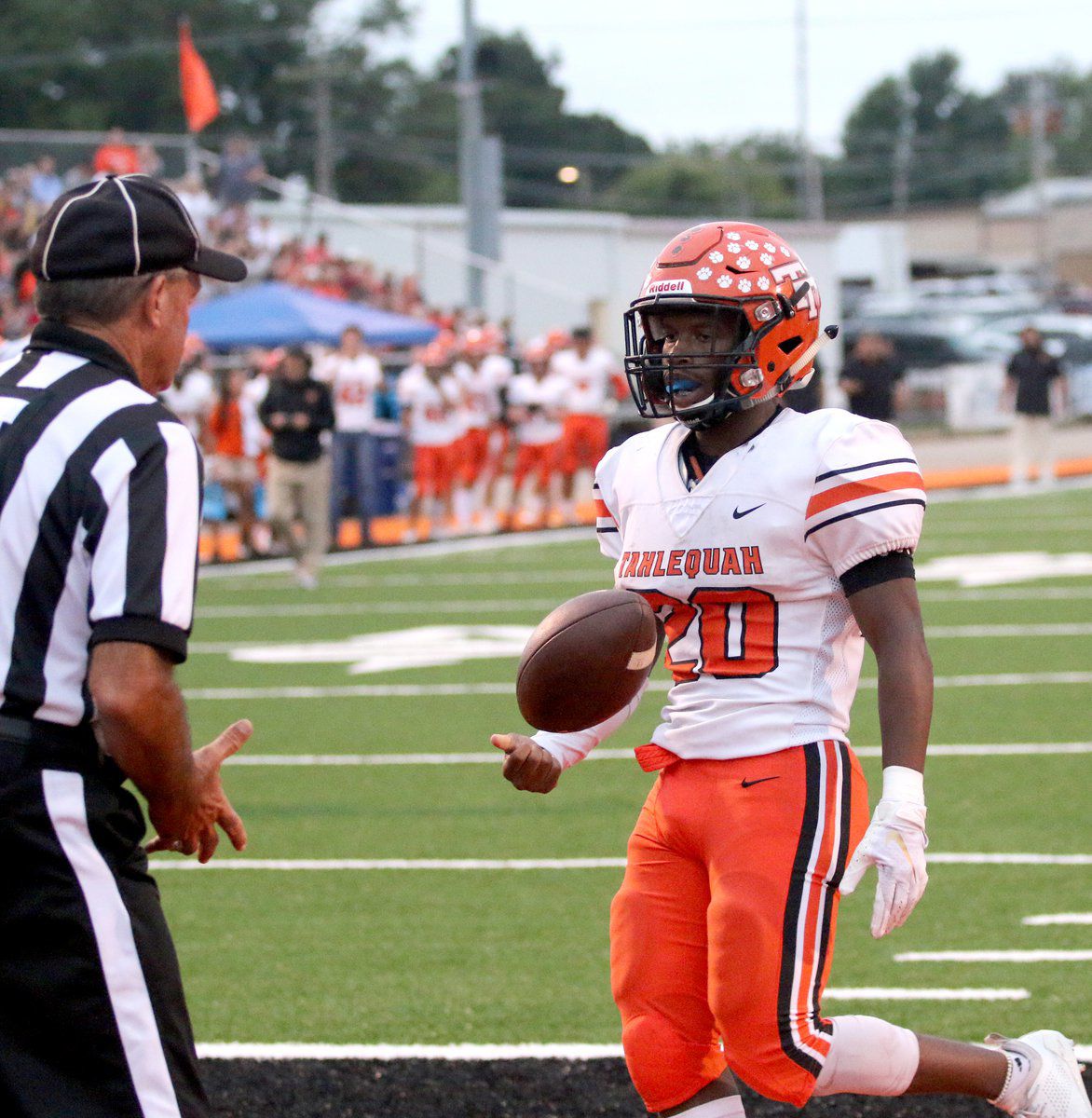 Tahlequah senior running back Dae Dae Leathers after scoring one of his four rushing touchdowns last week in the Tigers' 37-14 win over Sallisaw.

Tahlequah senior running back Dae Dae Leathers after scoring one of his four rushing touchdowns last week in the Tigers' 37-14 win over Sallisaw.

Tahlequah’s string of non-district wins can be put aside.

The Tigers (3-0) won their ninth consecutive non-district game in last week’s 37-14 road win over Sallisaw, which dates back to their season opener in 2017.

The Tigers open District 5A-4 play against Tulsa Will Rogers on Friday in a 7 p.m. kickoff at Doc Wadley Stadium. It’s their first home game since topping Fort Gibson, 42-21, in their season opener on Sept. 6.

“The most important thing is that football game. It’s extremely important that we’re 1-0 after Friday night. Homecoming itself can be a distraction, but I think we’ve got a mature football team and I think they’re hungry and have a goal in mind. As we tell them every week, in reality it doesn’t matter who we’re playing, and that’s not to disrespect any opponent we play. What matters is who we are. We control what we control. That’s been the message, and they’ve went about it the right way.”

Rogers has suffered mightily. The program is currently on a 30-game losing streak with the last win coming against Tulsa McLain on September 16, 2016. The Ropers are coming off an 18-6 setback to McLain last week.

The Tigers got the usual output from standout senior running back Dae Dae Leathers, who sparked the offense with four rushing touchdowns and totaled 187 yards on 23 carries last week. Through three games, Leathers has 591 yards (8.6 yards per carry) on the ground to go along with six TDs.

“We scored four times on six possessions in the first half and anytime you do that you know you’re being pretty productive,” Gilbert said of his offense in the win over the Black Diamonds. “Dae Dae had a great game. You saw his ability in the open field and his vision. Dae Dae has that ability and he’s playing really well right now, at a high level.”

Senior quarterback Tate Christian is completing 55 percent of his passes and has thrown for 431 yards with five touchdowns and one interception. Last week, Christian threw for 99 yards and had a 25-yard touchdown pass to receiver Jaxon Jones.

Kobey Baker, who missed last week’s game with an injury, and Tristan King have been Christian’s top two go-to targets. Baker leads the team with 11 receptions and has 94 yards with a touchdown, and King has eight catches for a team-best 146 yards and a score.

The offense still isn’t anywhere where it should be according to Gilbert.

“We left four touchdowns on the board. There were opportunities missed,” he said. “We had two drops by two receivers and Tate missed two open receivers. What we have to understand going forward is that in big games those opportunities are only presented so many times. We’ve got to make the most of those. We’ve made the most of some of them, but we need to do it more consistently.”

The Tigers received stellar play from three of their seniors defensively against the Black Diamonds.

Linebacker Dylan Parish collected a team-high 10 tackles, including one for a loss, defensive end Blake Corn had five stops with three for losses, and lineman Travis Davis had four tackles with four of those coming from behind the line of scrimmage. Corn and Davis also had two quarterback sacks each.

Linebacker Angel Quezada and defensive back Qua’shon Leathers added seven tackles apiece, and Tyler Joice had an interception that he returned 19 yards.

Tahlequah reached its 9-5-9 goal for a third straight week, grading out at 9-5-90 percent, against an offense that came out in full air raid mode.

“Our guys handled it really well,” Gilbert said. “I thought the defensive staff did a really good job to adjust to what they were doing. There were easily over 50 some pass plays called and they flipped the script of who they were. Again, our guys made a lot of plays and only gave up 14 points. It was a good outing.

“Dylan Parish had a big game. He had 10 tackles. The defensive line was very active in getting pressure. Travis Davis and Blake Corn had great games.”

Parish is the team leader in total tackles with 28 through through three weeks. Parish also leads in tackles for losses with five. Qua’shon Leathers has 24 tackles, and Quezada follows with 22. The Tigers have forced three turnovers — interceptions from Joice, King and Baker. Davis leads with 2.5 sacks.

Head coach Parker Childers is in his first year with the Ropers. Rogers suffered losses to Tulsa Victory Christian (34-7) and Okmulgee (12-8) over the first two weeks.

“Tulsa Rogers is very athletic,” Gilbert said. “They’re better than they were last year. You can tell by watching them that they’re in position, they’re coached well. We just need to focus on ourselves and come out and execute and take care of the football.”