GETTING IN THE SWIM: Tahlequatics cautiously opens doors – and its pool facility – to the public 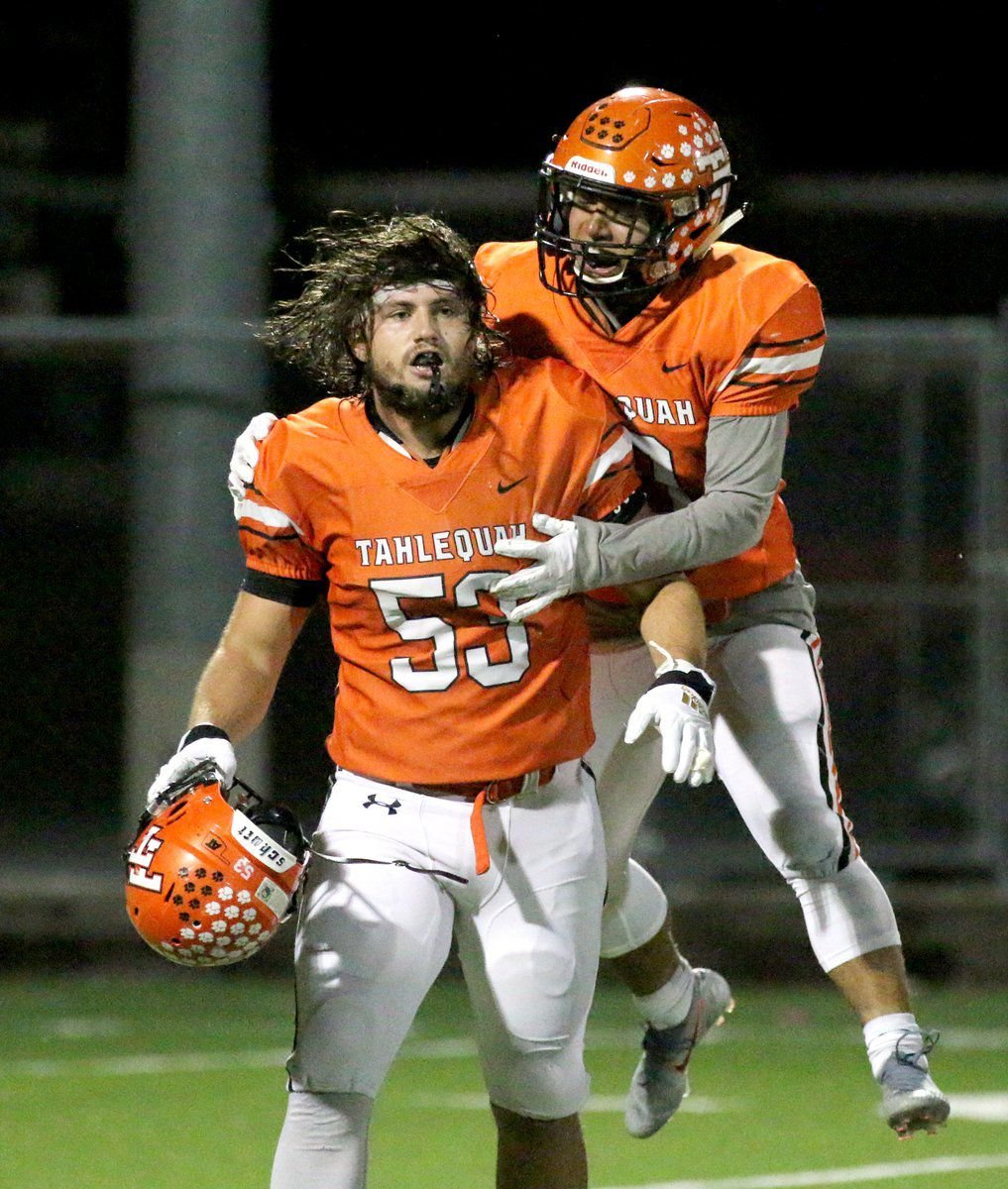 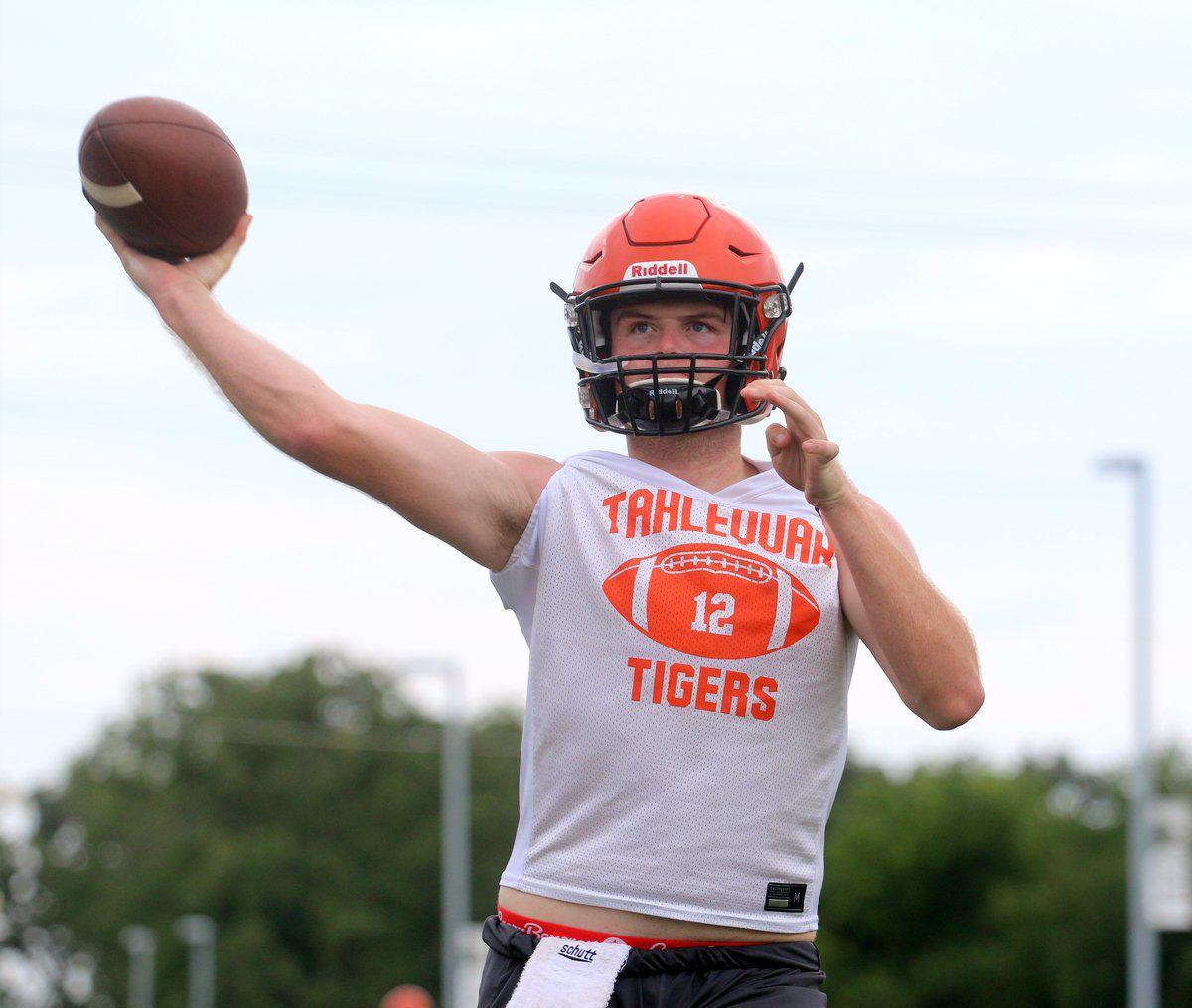 Tahlequah senior quarterback Tate Christian has led six scoring drives with the Tigers either trailing or tied over the last two weeks in wins against Skiatook and No. 6 Collinsville.

Tahlequah senior quarterback Tate Christian has led six scoring drives with the Tigers either trailing or tied over the last two weeks in wins against Skiatook and No. 6 Collinsville.

They aren’t surprising with savvy leaders like seniors Tate Christian and Blake Corn.

When adversity strikes, the Tigers just know how to respond.

They did so in the late 26-22 come-from-behind win over Skiatook at Doc Wadley Stadium.

They did so in the 35-28 overtime win at sixth-ranked Collinsville last week.

In a sense, they’ve played better under pressure.

“It’s been fun to watch these guys respond the way that they’re supposed to,” Gilbert said on Monday. “That’s as satisfying for a coach as anything that you’ll ever see. Wins or losses, it doesn’t matter. It’s just the correct response, and that’s what you like to see.”

A big reason is a senior group that strikes a chord with Gilbert.

“These kids have put in a lot of time, and I think the growth that we’ve seen from the senior group over the last two to three years is as strong as I’ve ever seen since I’ve been here,” he said. “They’ve really taken ownership of this program, not just on the field but in the locker room, in the weight room. The everyday things, the requirements are important to them. I think that’s very important. They have a genuine care for one another and I think that translates onto the field. It’s a great locker room to be in.”

In each of the four times Tahlequah has trailed over the last two weeks, the offense — behind Christain at quarterback and standout senior running back Dae Dae Leathers — has immediately responded with touchdowns.

The defense, led by Corn and senior linebacker Dylan Parish, was forced to hold its ground throughout the second half of Tahlequah’s 9-7 win at Coweta. It also ended the overtime thriller with a stand against the Cardinals.

In take one against Skiatook, Christian marched his team down the field in a perfectly executed two-minute drill, completing all six of his passes, and finished the drive with a four-yard TD run that would lift Tahlequah to victory. He also helped bring the Tigers back from a 19-7 deficit in the first half.

In take two against Collinsville, he threw two touchdown passes in crucial moments. He had a 10-yard scoring pass to Simeon Armstrong with just 24 seconds left that sent the gave into overtime, and delivered what would be the game-winner in OT on a six-yard TD pass to Tristan King.

Corn, the Tigers’ disruptive defensive end, finished off Skiatook in the closing seconds with one of his team-high five quarterback sacks.

Christian and Corn have set the standards.

“They are very mature in how they go about life in general,” Gilbert said. “They respond the way that you’d expect someone being a little older. They both have a very good understanding of who they are and how you’re to react and respond and go about your daily routine.”

Nobody else in Class 5A is unbeaten while the Tigers, who are ranked third along with Piedmont in this week's Associated Press’ Oklahoma High School Football Poll, currently sit at 6-0 overall and 3-0 in District 5A-4. The Tigers didn’t budge in the poll after the win over Collinsville.

But Gilbert’s group will keep on keeping on. It suits what Gilbert’s program is all about.

“We set goals,” Gilbert said. “We’re goal-oriented, goal-driven. Whatever else that comes along that can motivate them, that’s great. But I think the desire to do some things this year that haven’t been done in a long time around here is motivation enough for these guys. That’s what is exciting...they come to work every day and you’re not having to push these guys.”

Underappreciated or not, Tahlequah is winning football games like it’s 1991. The 6-0 start is the best since that time. Going back to last year, the Tigers have won their last 10 regular season games, last seven district games and have won their last nine games away from Doc Wadley Stadium.

Tahlequah will try to extend on all of those streaks Thursday when it plays in its second consecutive top 10 battle at eighth-ranked Pryor (5-1, 3-0).

Right now, the unbreakable Tigers have something special brewing.

They are showing traits of a championship caliber team.

There’s plenty of fight in these cats.