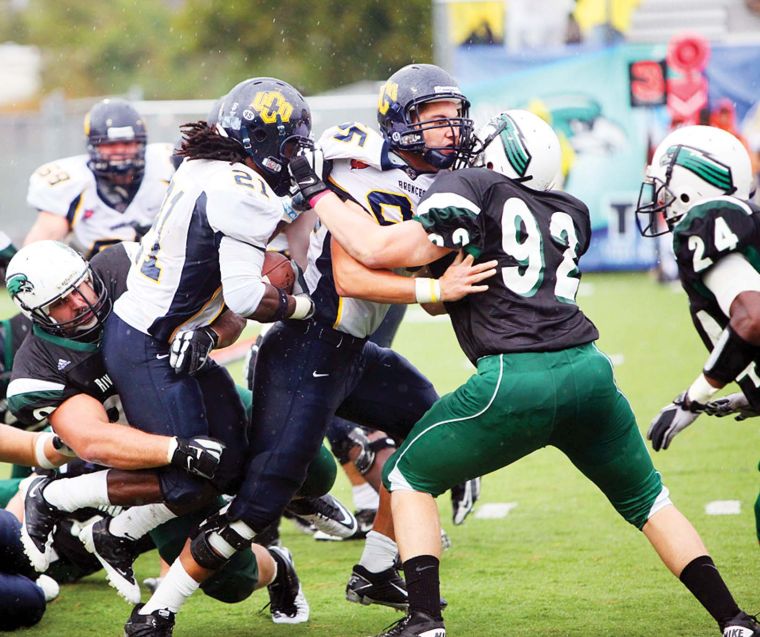 NSU’s Alan Stroup (92) was a walk-on for the RiverHawks in 2009. Entering 2011, he’ll be a partial-scholarship player in the defensive line rotation. In the photo, Stroup goes after Central Oklahoma’s Josh Birmingham (21) in the RiverHawks’ 39-28 victory over UCO in 2010. 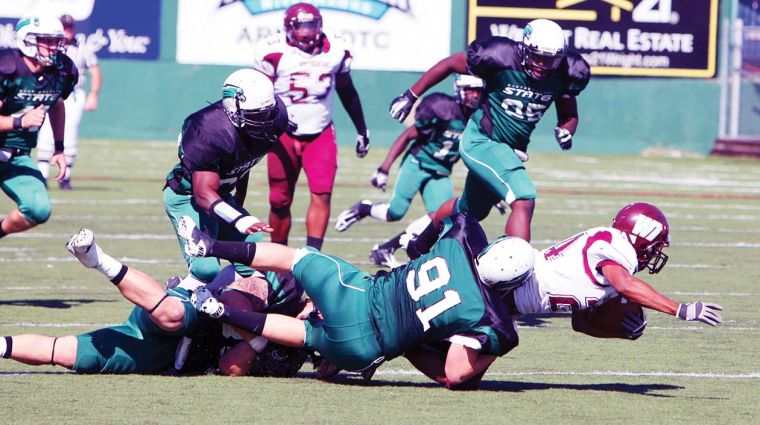 NSU’s Alan Stroup (92) was a walk-on for the RiverHawks in 2009. Entering 2011, he’ll be a partial-scholarship player in the defensive line rotation. In the photo, Stroup goes after Central Oklahoma’s Josh Birmingham (21) in the RiverHawks’ 39-28 victory over UCO in 2010.

When it came time for Alan Stroup to choose where he was going to play college football, he didn’t have many options. The Coweta native had two choices: go the junior-college route and play at McPherson College in Kansas or stay in Oklahoma and walk on at Northeastern State.

Stroup chose the latter, and he’s no longer just a walk-on who occupies space on the sidelines. He’s a regular participant who has earned himself a partial scholarship.

“He’s a huge contributor on our football team,” NSU head coach Kenny Evans said of Stroup. “It’s great when a walk-on earns a scholarship like that. It just serves as motivation for other walk-ons.”

Stroup, a 6-foot-2, 275-pound defensive lineman, listened to what McPherson had to offer, but because of a educational scholarship to NSU, he ended up in Tahlequah.

“I went down there (McPherson) for a visit,” said Stroup, who will be a junior for the RiverHawks in the upcoming 2011 season. “But I got another scholarship here that wasn’t for football. So I figured I would just come here and walk on. And luckily, he (Evans) gave me a scholarship, so I’m here now.”

Out of high school, Stroup was a tad bit under-sized for the defensive front, according to Evans.

“He really wanted to come here, but he was a little too small out of high school,” Evans said.

Then came the turning point for Stroup: his freshman year on campus.

“His first year,” Evans said, “he put on weight and grew.”

But beyond Stroup’s height and weight, what impresses Evans the most about Stroup is his nonstop motor.

“His work ethic is what has driven him,” Evans said. “And that drive gave our offensive line fits while he was on the scout team.”

After not making his way onto the stat sheet in 2009, Stroup broke through last year for the RiverHawks, coming up with 25 tackles, 4 1/2 tackles for loss and 1 1/2 sacks. With the season opener against Bacone on the horizon, Stroup has set forth a goal to achieve in 2011.

“I’d like to get an interception and return it for a touchdown,” said a chuckling Stroup, who played in nine out of 11 games in 2010. “But as far as goals go, any way I can better this team is what I want to do. If they want me on the scout team again, I’ll be on the scout team. It’s wherever they need; I’ll go there.”

Even with players like William Whitfield and Beau Beathard ahead of Stroup in rotation on the defensive front, Evans projects Stroup to see plenty of playing time this year.

“As of right now, he’s just in the rotation and likely won’t start,” Evans said of Stroup, whose standout game in 2010 was against Southeastern Oklahoma State where he had two tackles for loss and one sack along with five tackles. “He might start here and there, but he’ll definitely get close to 30 or 40 snaps a game. Plus, maybe 20 more on special teams.”

Regardless of time spent on the field, Stroup is just happy to suiting up for a team that finished above .500 (6-5) for the first time in more than a decade.

“I love this team,” Stroup said. “(Last year) was just great to be a part of the turnaround. The town needed it, we needed it and hopefully we can build off of it and continue down the right path.”

When Alan Stroup wrapped up his high school career at Coweta, he walked on for Northeastern …