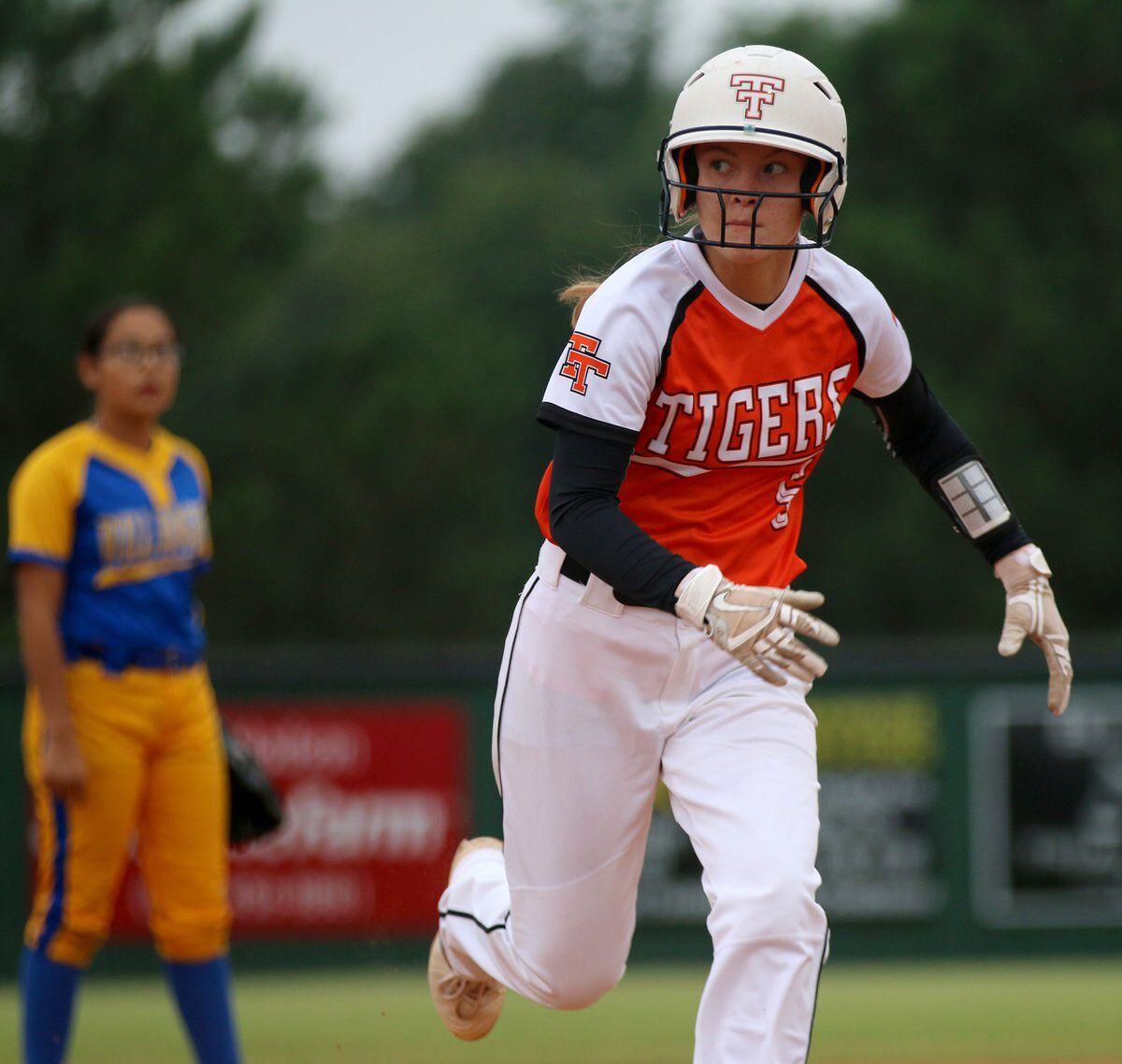 Tahlequah freshman Charlea Cochran runs the bases Thursday against Tulsa Will Rogers in game one of a doubleheader. The Lady Tigers swept the Lady Ropers with 21-0 and 13-0 victories. 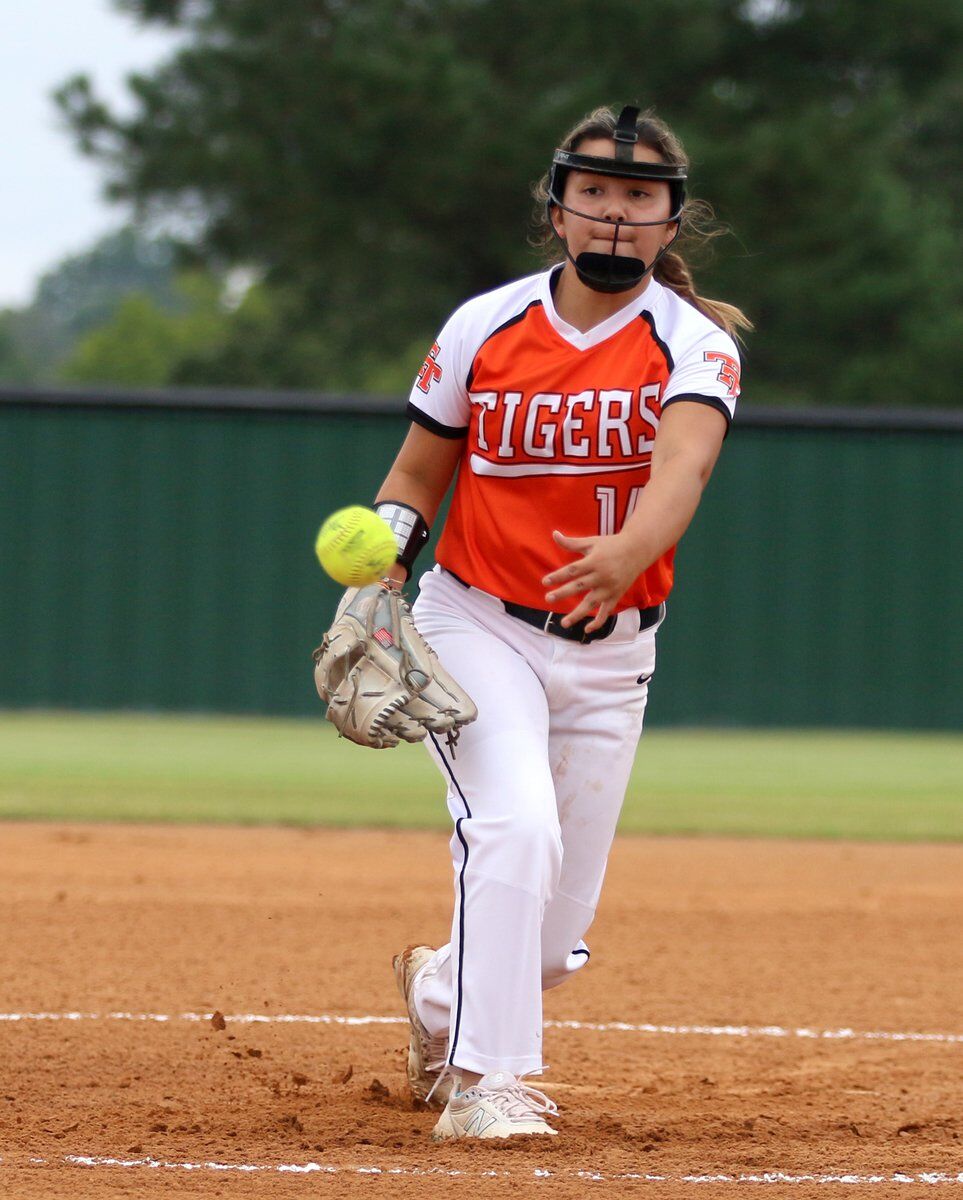 Tahlequah freshman Charlea Cochran runs the bases Thursday against Tulsa Will Rogers in game one of a doubleheader. The Lady Tigers swept the Lady Ropers with 21-0 and 13-0 victories.

The Lady Tigers, who were in COVID-19 quarantine and hadn't played since Aug. 25 when they defeated McAlester on the road, dismantled Tulsa Will Rogers in a doubleheader sweep, defeating the Lady Ropers 21-0 and 13-0 to win their fourth and fifth games in a row.

The two wins move Tahlequah to 10-6 overall and 6-0 in District 5A-4 under head coach Chris Ray.

The two week absence wasn't an easy one. The Lady Tigers, who had won three straight games before going into lockdown, returned to practice Tuesday with a spirit.

"When the kids found out that we had to go into quarantine the look on their faces said it all," Ray said. "You could just tell that they were devastated. We had started to play really well when it happened, so it was good to get back. I know when we came back for practice on Tuesday when we were allowed to come back, it was a really upbeat practice. It was a good practice. The kids were really dialed in and focused."

Tahlequah was dominant in every aspect Thursday.

Sophomore pitcher Mikah Vann tossed a no-hitter in the opener, while the offense produced 14 hits and scored runs in all four innings, including 10 in the opening frame.

Vann struck out nine of the 16 batters she faced, did not issue a walk, and posted a strike percentage of 73.

Senior Bailey Jones, who threw a no-hitter against Tulsa Memorial on Aug. 24, was equally sharp from the pitcher's circle in the nightcap. Jones allowed just one hit and struck out five across four innings.

"For our pitchers being off for two weeks, I thought Mikah and Bailey were pretty sharp," Ray said. "They didn't walk anybody and the only hit was a little infield dink that Bailey gave up."

Offensively, Tahlequah had a two-game total of 25 hits, including 11 extra base hits.

"It actually kind of surprised me as good as we were with our bats," Ray said. "Hitting is all about timing and seeing that live pitching, and when you haven't done that for 16 days, it makes a huge difference. I was just going to let the kids get in there and hit, just to try to see as many pitches as they could and just try to get some sense of rhythm back and get some confidence built up."

Lexi Hannah, Mia Allen, Madi Matthews and Vann each collected two hits to pace the lineup in game one, while Matthews drove in a team-high four runs. Charlea Cochran and Allen followed with three RBIs apiece, and Jayley Ray and Vann each drove in a pair of runs.

In the 10-run first inning, Tahlequah was lifted by a Matthews' three-run double, a Cochran two-run double, RBI singles from Allen and Vann, an RBI triple by Allen and a run-scoring double from Vann.

Loren Walker, Cochran and Allen each had two hits to lead the Lady Tigers in game two. Cochran, Allen, Ray and Vann knocked in two runs apiece. Tahlequah pushed across five runs in both the second and third innings.

The Lady Tigers will play seven games next week. They host Glenpool in a 5 p.m. start Monday on senior night, host Durant at 5 p.m. Tuesday, and then will play twice Thursday and twice Saturday in the Tahlequah Festival, which replaces the originally scheduled Sequoyah Festival.

Tahlequah and Ada are the only two remaining unbeaten teams in 5A-4. Ada is 5-0, and Durant has one loss and is sitting at 3-1.